Two years ago, after nominating Brett Kavanaugh to the Supreme Court, President Donald Trump strongly hinted that his choice for the next opening would be a former law professor he had named to a federal appeals court the year before: Judge Amy Coney Barrett.

Now, three years into that job, Barrett is regarded — at least for now — as the leading contender to replace Justice Ruth Bader Ginsburg, who died Friday. If Barrett were nominated and confirmed, she would be the sitting justice with the least courtroom experience, but one viewed as a home run by conservative Christians and anti-abortion activists.

“She is the perfect combination of brilliant jurist and a woman who brings the argument to the court that is potentially the contrary to the views of the sitting women justices,” said Marjorie Dannenfelser, the president of the Susan B. Anthony List, an anti-abortion political group, who has praised Trump’s entire shortlist.

The nomination of a judge whom Trump was quoted last year as “saving” to be Ginsburg’s replacement would almost surely plunge the nation into a bitter and divisive debate over the future of abortion rights, made even more pointed because Barrett would replace a justice who was an unequivocal supporter of those rights. That is a debate Trump has not shied away from as president, as his judicial appointments and efforts to court conservatives have repeatedly shown.

Liberal groups have been sounding alarm over Barrett for two years because of concerns over how she might rule on abortion and the Affordable Care Act.

“Amy Coney Barrett meets Donald Trump’s two main litmus tests: She has made clear she would invalidate the ACA and take health care away from millions of people and undermine a woman’s reproductive freedom,” said Nan Aron, the president of Alliance for Justice, a liberal group.

But some White House officials worry that Barrett’s positions might galvanize not just Democrats but also suburban women and independent voters who would favor a more mainstream pick, and her nomination is hardly certain. Trump and his advisers may have to weigh how much support they would gain from those voters if he selected another nominee versus the risk of alienating parts of their base if they shy away from Barrett’s abortion record.

But it is also her personal qualities that particularly endear Barrett to conservatives across the country.

“Her religious convictions are pro-life, and she lives those convictions,” said Judge Patrick J. Schiltz, a longtime mentor and a U.S. district judge in Minnesota, who like Barrett is Roman Catholic. “The question of what we believe as a religious matter has nothing to do with what we believe a written document says.”

Barrett and her husband, Jesse Barrett, a former federal prosecutor who is now in private practice, have seven children, all under 20, including two adopted from Haiti and a young son with Down syndrome, whom she would carry downstairs by piggyback in the morning. She learned of her son’s Down syndrome diagnosis in prenatal testing, Schiltz said, and decided to keep the pregnancy. Barrett is known for volunteering at her children’s grade school, and at age 48, she would be the youngest justice on the bench, poised to shape a generation of American law.

She lives in South Bend, Indiana, a culturally tight-knit community, like many small college towns in the Midwest. The Barretts are regulars at Notre Dame tailgates and football games. Amy Barrett and other university faculty members have been known to work out together at a CrossFit-type program, sometimes with their former provost.

At least four families in the law school faculty have adopted children, said Carter Snead, a longtime friend of the Barretts and a Notre Dame law professor whose three children are also adopted. “Their family is radically generous and hospitable,” he said.

Barrett became an instant celebrity among the religiously conservative grassroots in 2017, when Democratic lawmakers questioned her public statements and Catholicism during her confirmation hearing for the 7th Circuit. “You have a long history of believing that your religious beliefs should prevail,” Sen. Dianne Feinstein, D-Calif., told her. “The dogma lives loudly within you.”

The expression “the dogma lives loudly within you” was emblazoned on mugs and T-shirts in Catholic circles as a point of pride and defiance of what many on the right have called anti-Catholic bigotry.

Barrett’s connection to the small and relatively obscure Christian group People of Praise also attracted attention after a report in 2017 that she and her husband were members. The group grew out of the Catholic charismatic renewal movement that began in the late 1960s and adopted Pentecostal practices such as speaking in tongues, belief in prophecy and divine healing.

Peers describe her as a textualist like Scalia: one who interprets the law based on its plain words, as opposed to someone who looks to accomplish the legislature’s purpose. And they said she was an originalist, meaning a judge who interprets the Constitution according to the understanding of those who drafted and ratified it.

“Justice Kennedy showed a willingness to interpolate things into the Constitution that, in cases like Obergefell, that Justice Scalia for example would not have done,” said John Garvey, the president of the Catholic University of America, who taught Judge Barrett in law school, referring to the 2015 decision that established a constitutional right to same-sex marriage. “My guess is that Judge Barrett wouldn’t assume that the judicial role carried that much power with it.”

The court will again hear arguments on the fate of the law in November, and Barrett’s article suggested that she would give its challengers a sympathetic hearing.

Her judicial philosophy on abortion has already garnered the most interest, for personal and legal reasons. In a talk at Jacksonville University in 2016, Barrett said that the core holding of Roe v. Wade was that women had the right to an abortion, and that was not likely to change in the future, but how states restrict abortion might.

“I think the question of whether people can get very late-term abortions, you know, how many restrictions can be put on clinics, I think that would change,” she said.

In her confirmation hearing in 2017, Barrett repeatedly stated that she would follow Supreme Court precedent on abortion as an appeals court judge.

“If Roe v. Wade were coming against the court for the first time, I suspect that she would say there is nothing in the Constitution about this, and if you want a constitutional right to an abortion, people are free to add one to the Constitution, but it is not in there,” Garvey said. “That is not the question now. We have had 45 years of abortion jurisprudence.”

In her work on the appeals court, Barrett has been wary of broad interpretations of abortion rights.

In 2018, she joined a dissenting opinion expressing skepticism about a ruling that had held unconstitutional an Indiana law banning abortions sought solely because of the sex or disability of a fetus. A three-judge panel of the appeals court — one that did not include Barrett — struck down the law, saying it conflicted with Supreme Court precedent.

Although the state did not seek further review from the full 7th Circuit, Judge Frank H. Easterbrook, joined by Barrett and two other colleagues, addressed the law in a dissent from denial of review by the full court of a different provision of the law. “None of the court’s abortion decisions holds that states are powerless to prevent abortions designed to choose the sex, race and other attributes of children,” he wrote.

The 7th Circuit’s opinion, written by Judge Diane S. Sykes and joined by Barrett, was skeptical of the constitutionality of the Chicago law under the First Amendment.

But Sykes said appeals court judges were not free to disregard Supreme Court precedents, even when later decisions appeared to undercut them. “The road the plaintiffs urge is not open to us in our hierarchical system,” she wrote.

That left open the possibility of a different result on the next higher rung in the judicial hierarchy: the Supreme Court.

Legal scholars said Barrett’s opinions on the appeals court have been models of judicial craftsmanship, tightly reasoned and unflashy.

“Her conservatism is embedded in her methodological and jurisprudential commitments, not any commitment to a particular policy outcome,” said Jonathan H. Adler, a law professor at Case Western Reserve University. “As a scholar and a judge, she has shown herself to be a very careful and deliberate thinker who is concerned with getting the right answer, whether or not it’s the popular answer.”

Barrett has also been a member of the Federalist Society, the conservative and libertarian legal group. She has spoken at the Blackstone Legal Fellowship, a program to train Christian law students that is run by the Alliance Defending Freedom, a Christian legal firm that has successfully represented religious conservatives at the Supreme Court, including the Colorado baker who refused to create a wedding cake for a gay couple.

Still, those who know Barrett say she is not ideological in her writings. Every Notre Dame Law School faculty member supported her elevation to the appellate court, noting they did so in spite of their different political persuasions. One of her former students said that in class she would not have known Barrett was Catholic, and that she did not start class with prayer or the sign of the cross like other professors at Notre Dame.

“Both of us are kind of right-of-center people,” said John P. Elwood, who taught a class with her at George Washington University in 2001 and who is now head of the Supreme Court practice at Arnold & Porter in Washington. “She didn’t wear it on her sleeve.”

Barrett has already become the symbol of the type of cultural influence many conservatives want to see in American government: leadership that looks to a higher power. In 2006, one of the three times she was named professor of the year, she gave the commencement address to Notre Dame law students.

“If you can keep in mind that your fundamental purpose in life is not to be a lawyer, but to know, love and serve God,” she said, “you truly will be a different kind of lawyer.” 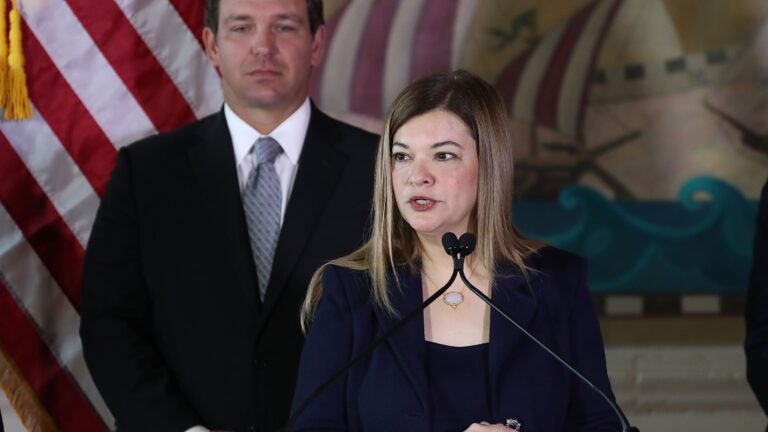 Who is Judge Barbara Lagoa? What to know about the judge rising on Trump’s Supreme Court list.