Jews and Evangelical Christians have a bit of a one-sided relationship, according to a new poll from Pew surveying religious group’s opinions of other religions. Evangelicals have very warm feelings toward Jews. Jews do not reciprocate that warmth.

The Pew poll asked people of varying religions to rate their feelings about other religions on a “feeling thermometer’’ from 0 to 100, with ‘0’ as cold/negative and ‘100’ as hot/positive. Among all responses, both Jews and Evangelical Christians were two of the three most warmly rated: Jews at 63 degrees and Evangelicals at 61 on average.

But looking closer at how each religion rated other religions, there’s an awkward split. In the chart below, we’ve circled in red the key numbers. 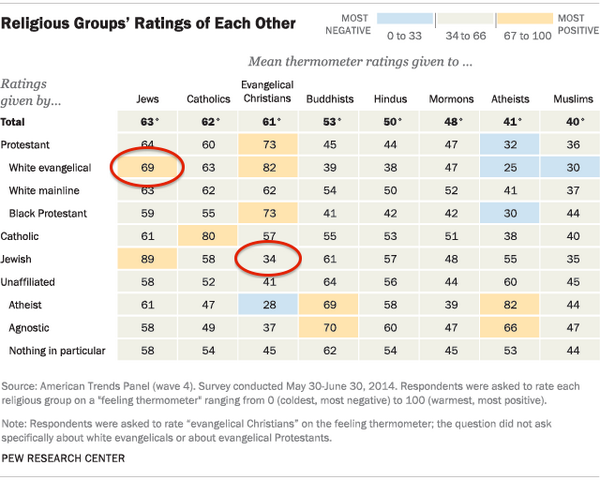 That contrast of feelings wasn’t seen among any other reported poll results. For example, Jews rated Catholics at a positive 58 degrees, and Catholics rated Jews at a similar 61 degrees.

The Jewish-Evangelical relationship was one of many interesting factoids to pick out from Pew’s extensive data study. The Washington Post notes that Democrats’ least-liked religious group are Mormons, partly a result of lingering Romney resentment. The Wall Street Journal, meanwhile, points out that Muslims and Atheists were rated in the least favorable light.