An armed anti-government group vowed to continue to occupy a federal wildlife refuge building in rural Oregon Sunday, in protest of the government’s treatment of two ranchers.

The occupation began with a peaceful demonstration Saturday, in which more than 100 people marched through downtown Burns, Oregon, to protest the prison sentences of two ranchers convicted of arson, Dwight Hammond, 73, and Steven Hammond, 46. They were ordered to report to prison in California after a federal judge ruled that the sentences they had served for arson were not long enough under federal law.

But later Saturday, some protesters traveled 30 miles southeast of Burns and took over the stone headquarters building of the Malheur National Wildlife Refuge, an area in Harney County operated by the U.S. Fish and Wildlife Service. Over the weekend, the group blocked entrances, lit a bonfire near the headquarters building and draped an American flag over a sign.

The wildlife agency said no federal wildlife employees were in danger in the occupation. “While the situation is ongoing, the main concern is employee safety and we can confirm that no federal staff were in the building at the time of the initial incident,’’ a Fish and Wildlife Service press officer said. 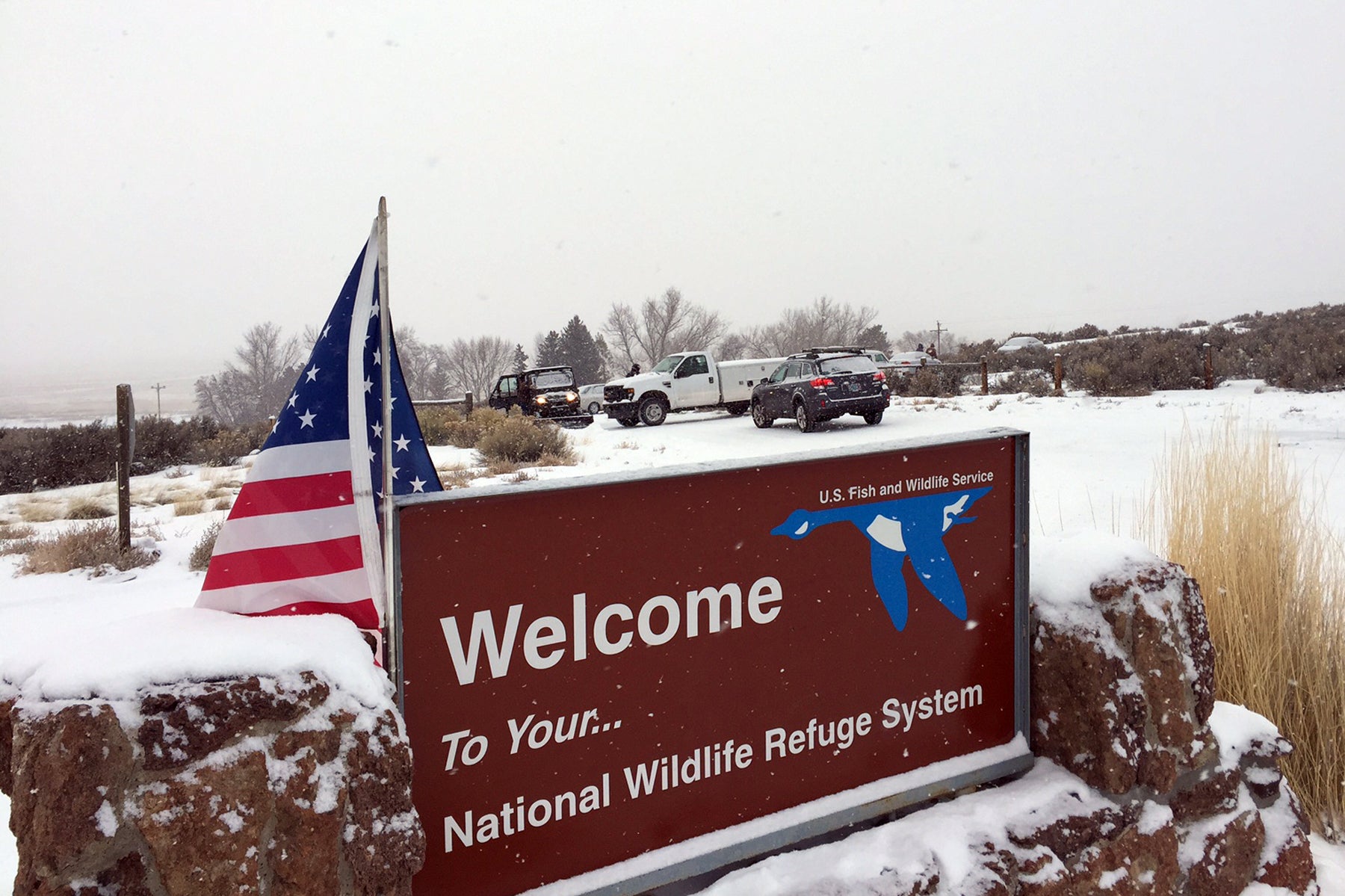 An entrance to Malheur National Wildlife Refuge where protesters are occupying a building on Sunday.

The group appeared to be led by Ammon Bundy, a rancher whose family became a symbol of anti-government sentiment in 2014, when his father inspired a standoff between local militias and federal officials seeking to confiscate cattle grazing illegally on federal land. In a statement captured on video, Bundy said that his group was “prepared to be out here for as long as need be’’ and would leave only when the people of Harney County “can use these lands as free men.’’

“We’re out here because the people have been abused long enough really,’’ he continued. “Their lands and their resources have been taken from them to the point where it’s putting them literally in poverty, and this facility has been a tool in doing that. It is the people’s facility, owned by the people.’’

Afterward, a group broke off and occupied the refuge headquarters.

Amanda Peacher, a reporter and producer for Oregon Public Broadcasting who was near the wildlife refuge Sunday, posted pictures on Twitter of arriving militiamen bringing in supplies and blocking the refuge’s entrance.

In a telephone interview Sunday morning with CNN, Bundy said his group wanted the federal government to restore the “people’s constitutional rights.’’

A lawyer for the Hammonds said, however, they did not welcome Bundy’s help, according to The Associated Press.

“Neither Ammon Bundy nor anyone within his group/organization speak for the Hammond family,’’ the lawyer, W. Alan Schroeder, wrote to David Ward, the Harney County sheriff.

The Harney County sheriff’s office did not respond to several requests for comment.

In a video posted to Facebook Thursday, Bundy called on the members of “different militia groups’’ to participate in the protest Saturday.

The Hammonds admitted they lit fires in 2001 and 2006 but said it had been to protect their property from wildfires and invasive plant species, The AP said. They were convicted three years ago, and the father served three months in prison, while the son served one year.

The Harney County Sheriff’s Department said the Oregon State Police was handling the incident. Beth Anne Steele, a spokeswoman for the FBI in Portland, said the agency was aware of the situation, but declined to comment further.

The Bundys have been organizing opposition to the government case against the Hammonds on social media in recent weeks, which they described as a tyrannical use of federal authority.

“We’re out here because the people have been abused long enough,’’ Ammon Bundy said in a separate video posted to Facebook Saturday.

He called the prosecution of the Hammonds “a symptom of a very huge, egregious problem’’ that he described as a battle over land and resources between the federal government and “the American people.’’

“The people cannot survive without their land and resources,’’ he said. “We cannot have the government restricting the use of that to the point that it puts us in poverty.’’

Bundy described the federal building as “the people’s facility, owned by the people’’ and said his group was occupying it to take “a hard stand against this overreach, this taking of the people’s land and resources.’’

He said the group would remain there indefinitely and told an interviewer that he hoped more supporters would join them. “We have a facility that we can house them in,’’ he said, referring to the occupied building.

“We pose no threat to anybody,’’ Bundy said. “There is no person that is physically harmed by what we are doing.’’ He added that if law enforcement officials “bring physical harm to us, they will be doing it only for a facility or a building.’’

However, in an interview with The Oregonian earlier Saturday evening, Bundy and his brother said they would not rule out violence if law enforcement officers attempted to remove them from the building.

“The facility has been the tool to do all the tyranny that has been placed upon the Hammonds,’’ Ammon Bundy told the newspaper. He said he planned to remain in the building for “years.’’

Ian Kullgren, a reporter for The Oregonian, posted on Twitter that he had spoken by phone with Bundy Sunday morning.

Cliven Bundy, Bundy’s father, previously galvanized conservative critics of the federal government after a standoff in 2014 with agents from the Bureau of Land Management, who tried to confiscate cattle he had illegally grazed on federal land since 1993. U.S. to share its AstraZeneca shots with the world after safety checks