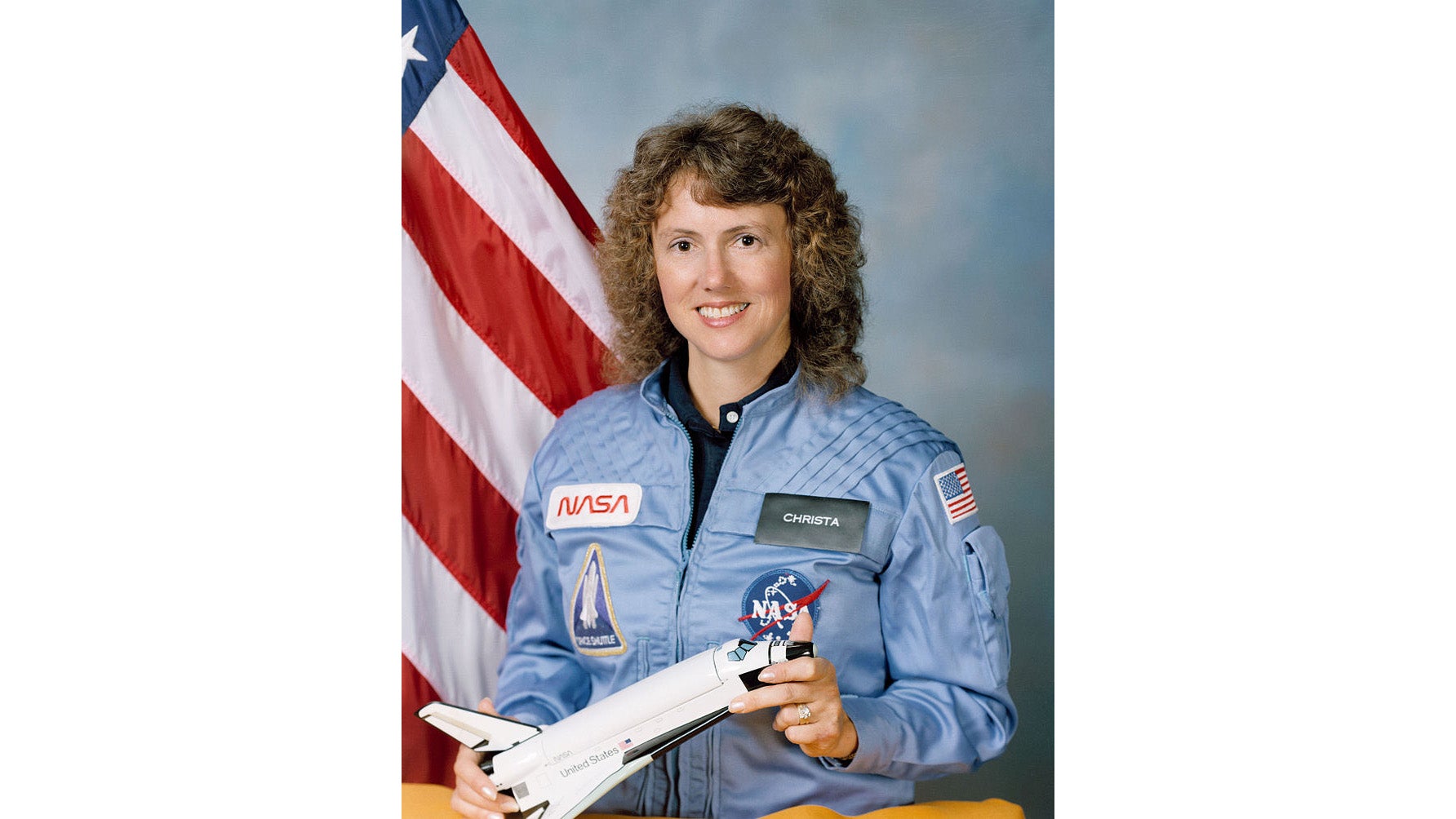 Christa McAuliffe was chosen from a field of more than 10,000 applicants as NASA’s first “Teacher in Space.’’

But 73 seconds after launch, the excitement quickly turned to confusion, and then horror, as Challenger exploded.

“Suddenly, without warning, it erupted in a ball of flame,’’ read a New York Times report. “Two large white streamers raced away from the blast, followed by a rain of debris that etched white contrails in the cloudless sky and then slowly headed toward the cold waters of the nearby Atlantic. The eerie beauty of the orange fireball and billowing white trails against the blue confused many onlookers, many of whom did not at first seem aware that the aerial display was a sign that something had gone terribly wrong.’’

McAuliffe was one of seven killed in the explosion.

To many of those closest to McAuliffe, the tragedy wasn’t immediately apparent.

“I don’t think anyone in the stands viewing their first launch knew what happened,’’ Malavich said. “After the explosion, I jumped down to find my husband. He was with people who had been to many launches. And I said ‘Wasn’t that awesome?’ He took me by the shoulder and said, ‘The vehicle exploded.’ I looked at him and said ‘That’s not funny.’ And he said ‘No, she’s gone.’’’

An announcement was made to the thousands of spectators gathered at the center: “Flight controllers here looking very carefully at the situation. Obviously a major malfunction.’’

“We didn’t really know what happened,’’said Lisa Bristol, McAuliffe’s younger sister. “When they said, ‘Major malfunction,’ I looked at my parents and said, ‘It’s gotta be gone.’’’

At the time of her death, McAuliffe was 37 years old, and a mother of two young children. Scott, then 8, and Caroline, then 5, were watching with their father, Steve. 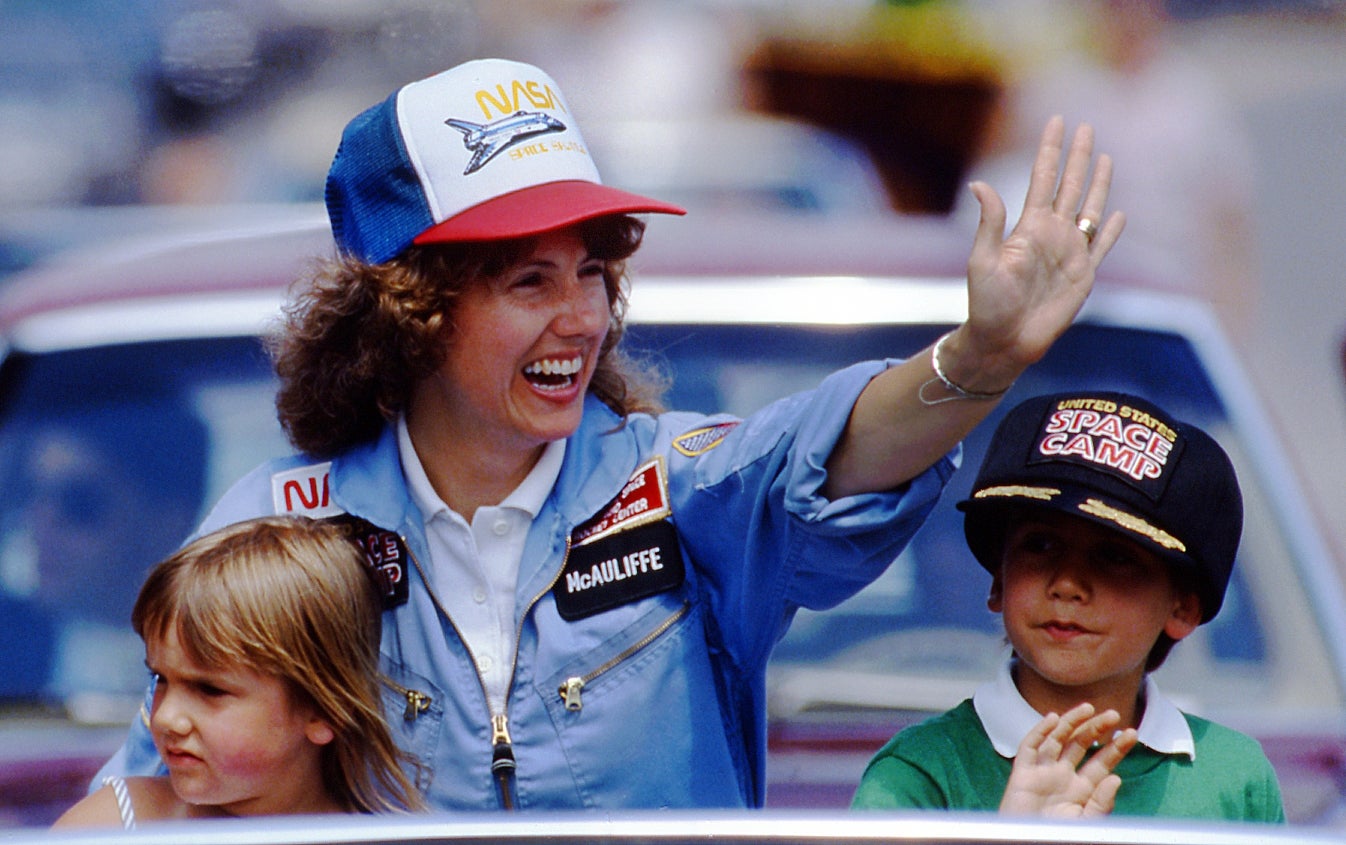 McAuliffe riding with her children Caroline, left, and Scott, right, during a parade down Main Street in Concord, New Hampshire.

Scott’s entire third grade class made the trip from New Hampshire to Florida for the launch. A Boston Globe report quoted travel agents, who estimated that several thousand New Hampshire residents had traveled south to see the liftoff.

The State of the Union speech President Ronald Reagan intended to deliver that evening was postponed. Reagan instead spoke about the tragedy.

“Sometimes, when we reach for the stars, we fall short,’’ Reagan said. “But we must pick ourselves up again and press on despite the pain.’’

It wasn’t immediately clear what had gone wrong, but details began to emerge in the days and weeks that followed.

A failure in one of the O-ring seals was to blame, something officials at NASA were warned about. Unbeknownst to McAuliffe and the other astronauts aboard the shuttle, there had been extensive discussions in the days and hours leading up to the launch over concerns that the cold weather could impact the rockets’ O-rings, causing catastrophic damage and — potentially — loss of life.

The investigation that followed determined that crew members likely survived the initial explosion and may have been conscious until the cabin hit the ocean at an estimated 207 mph.

Malavich remembers the last time she saw McAuliffe, and just how confident her friend was of her safety.

“I said to [McAuliffe], ‘The next time I see you, you will have been in space.’ And my eyes welled up, and I said to her ‘Aren’t you even a little bit scared? And she said to me ‘No, I have no fear. I have complete faith in NASA that they would never put us in harms way.’’’

“It was a human error,’’ Bristol said. “We’re human and we make mistakes.’’

The “Teacher in Space’’ program was announced in August 1984. McAuliffe wasted no time deciding whether to apply.

“Christa absolutely thought she had a chance and so did I,’’ Malavich said. “I remember thinking – if anyone can do this, she will do it. We met in Manchester at Chucky Cheese. We had the four kids with us and we were sitting there and she’s reading me her application and tweaking it.’’

In September 1985, McAuliffe was chosen from a field of more than 10,000 applicants.

“I want to demystify NASA and space flight,’’ McAuliffe told reporters when the announcement was made. “I’m a good communicator, I’m real enthusiastic about teaching, I love people, and I think that must have been generated through the interviews and the process that we’ve been through. And I was somebody everyone could identify with.’’ 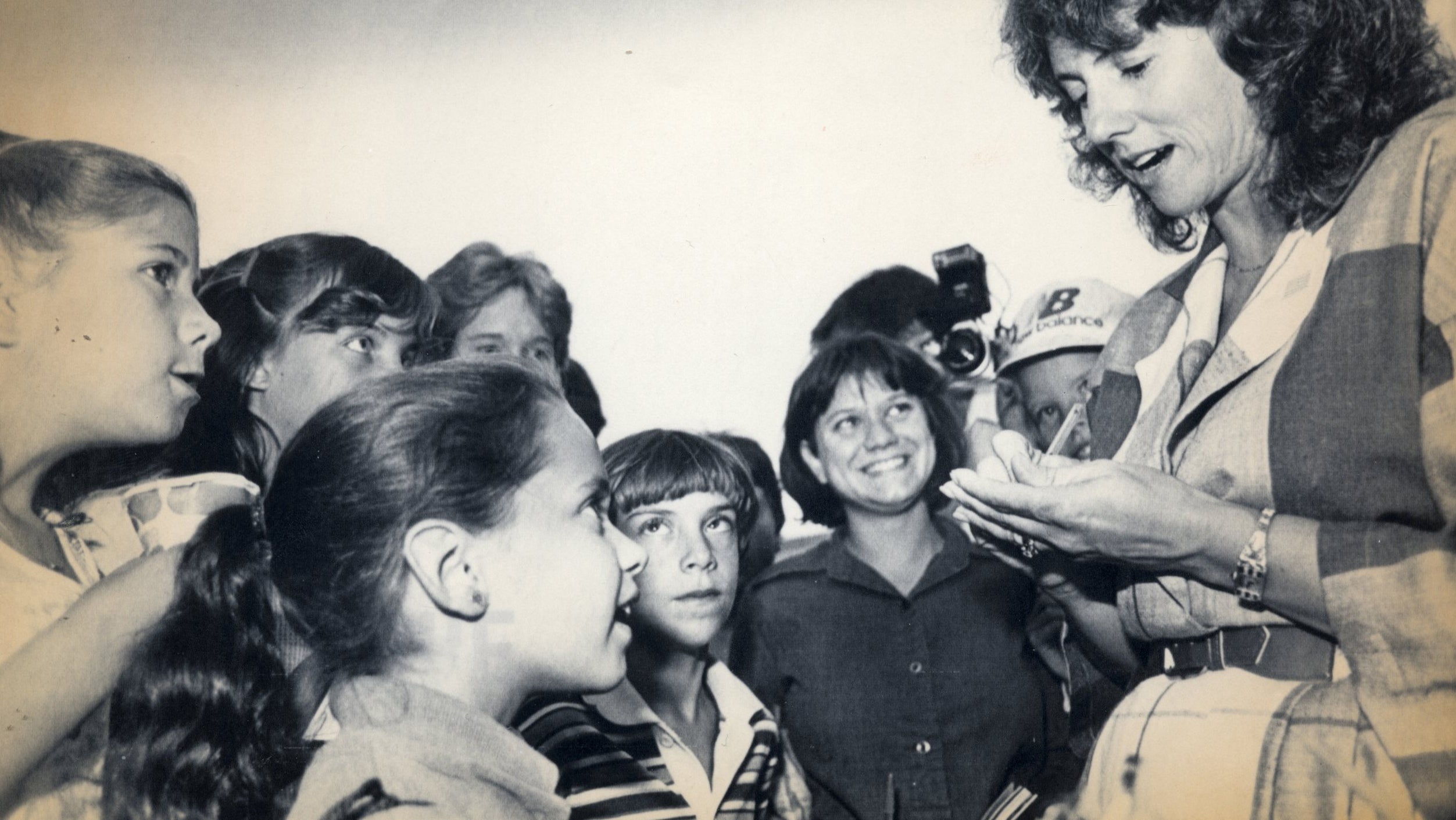 McAuliffe signs autographs after being selected as the first “Teacher in Space.’’

Those close to McAuliffe, who was born in Boston and raised in Framingham, saw the opportunity as perfect for her.

McAuliffe represented a huge public relations opportunity for NASA, which was under pressure to cut costs and under fire from critics.

“With all those problems, NASA is beside itself about the positive publicity that Concord [N.H.] High School social studies teacher McAuliffe has created,’’ read a Boston Globe report published three days before Challenger launched.

McAuliffe planned to conduct two lessons from space, both of which would be televised into classrooms across the country. She was also set to embark on a seven-month speaking tour after the Challenger flight.

Thirty years after her death, McAuliffe’s legacy lives on.

The Christa Corrigan McAuliffe Center at Framingham State University – McAuliffe’s alma mater – was established in 1994. A gathering at the center is planned for Thursday evening.