Flowers placed at the foot of a tree near a Cracker Barrel restaurant in Kalamazoo, Michigan, one of three sites of a series of shootings that left six people dead and two injured late Saturday.

KALAMAZOO, Mich. — The shootings came out of nowhere, one after the other, and with no apparent connection.

A woman was shot multiple times Saturday evening as she stood in the parking lot of her suburban townhouse complex. A few miles away, and a few hours later, a man and his son, who the authorities said was 17 or 18, were fatally shot outside a balloon-lined car dealership near a strip of fast-food restaurants. Minutes after that, along an interstate highway just outside Kalamazoo, four women were fatally shot, and a teenage girl gravely injured, as they sat in their cars outside a Cracker Barrel.

The authorities said that a lone gunman, Jason B. Dalton, a driver for Uber, was responsible for the long, chaotic night of terror in this county, and investigators were looking into reports that he was ferrying passengers before the shooting began and perhaps even in between some of the sudden, random bursts.

Even at a time when mass shootings have grown commonplace, and some Midwestern cities regularly see multiple killings in a weekend, the explosion of violence in ordinary, unpredictable places here, and to people with no seeming connection, shocked the authorities, who were trying to piece together what might have prompted someone to roam the county in search of victims.

Altogether, six people were killed and two injured in three separate shooting scenes that unfolded across Kalamazoo County, a Southwest Michigan community that falls halfway between Detroit and Chicago. The injured and the dead ranged from 14 years old to 74.

The suspect, Dalton, 45, a former insurance company salesman, was arrested without incident in the parking lot of a downtown Kalamazoo bar about six hours after the rampage began. 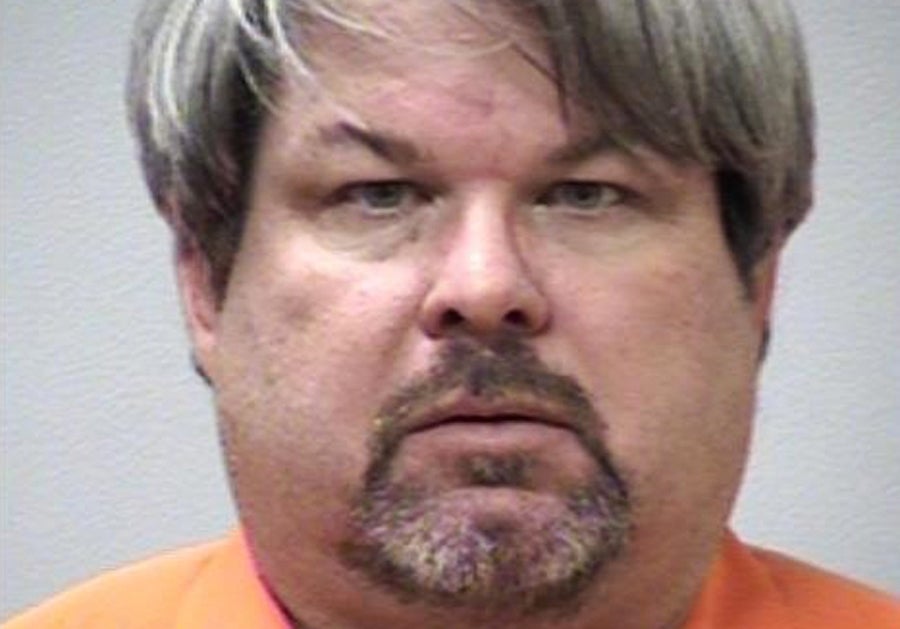 Jason Dalton, 45, is shown in this booking photo provided by the Kalamazoo County Sheriff’s Office.

During a news conference early Sunday, Jeffrey Getting, the Kalamazoo County prosecutor, described the confusing scene and the scramble by the police to respond to the shootings and find the gunman.

“There’s this sense of loss, there’s this anger, there’s fear, there’s all these emotions,’’ Getting said. “You put on top of that: How do you go and tell the families of these victims that they weren’t targeted for any reason than they were there to be a target?’’

During the past year, the country has seen a series of mass shootings — including ones at a church in Charleston, South Carolina; at a community college in Oregon; and at a county government gathering in San Bernardino, California, which was later declared an act of terrorism. President Barack Obama has repeatedly called for the nation to take steps to curb gun violence and carry out stricter background checks.

The authorities here did not immediately provide a motive for the rampage. “There is some information out there about what was happening’’ in the suspects’ life, Getting said.

He added, “You know, of course, it doesn’t come anywhere near to explain what he’s done.’’

Dalton, who was in custody Sunday and expected to face formal charges as early as Monday, had no criminal record. He was described by neighbors as quiet and polite, though he caught their attention when he occasionally shot a gun out the back door of the house he shared with his wife and two children. He had worked for Progressive Insurance until mid-2011.

According to one passenger, he started working as an Uber driver recently. The passenger, Sara Reynolds, 25, said Dalton drove her and a friend to a movie theater on Feb. 14 so they could see “Deadpool.’’

In an interview, Reynolds recounted how Dalton told her that he and his son had also seen the movie. But he also told Reynolds, unsolicited, that he was a new driver for Uber and that he had quickly picked up poor marks.

“He had just started doing Uber as a driver a day or two ago and that he had already gotten some bad reviews, which was a little weird, so I asked him about it,’’ Reynolds said. “And he said it was just drunk kids and his car messing up a little bit.’’

He did not seem to want to discuss the matter in detail, she said. “I could tell that he didn’t really want to talk about it anymore,’’ said Reynolds, who described Dalton as “a little shy and awkward, but he was pretty normal for the most part.’’ Reynolds said she had no complaints about his driving that night.

An Uber official who declined to be identified because of the continuing investigation said Dalton had passed a company background check.

Joe Sullivan, the chief security officer for Uber, said the company was “reaching out to police to help with their investigation in any way that we can.’’

“Our hearts and prayers are with the families of the victims of this devastating crime and those recovering from injuries,’’ Sullivan said. 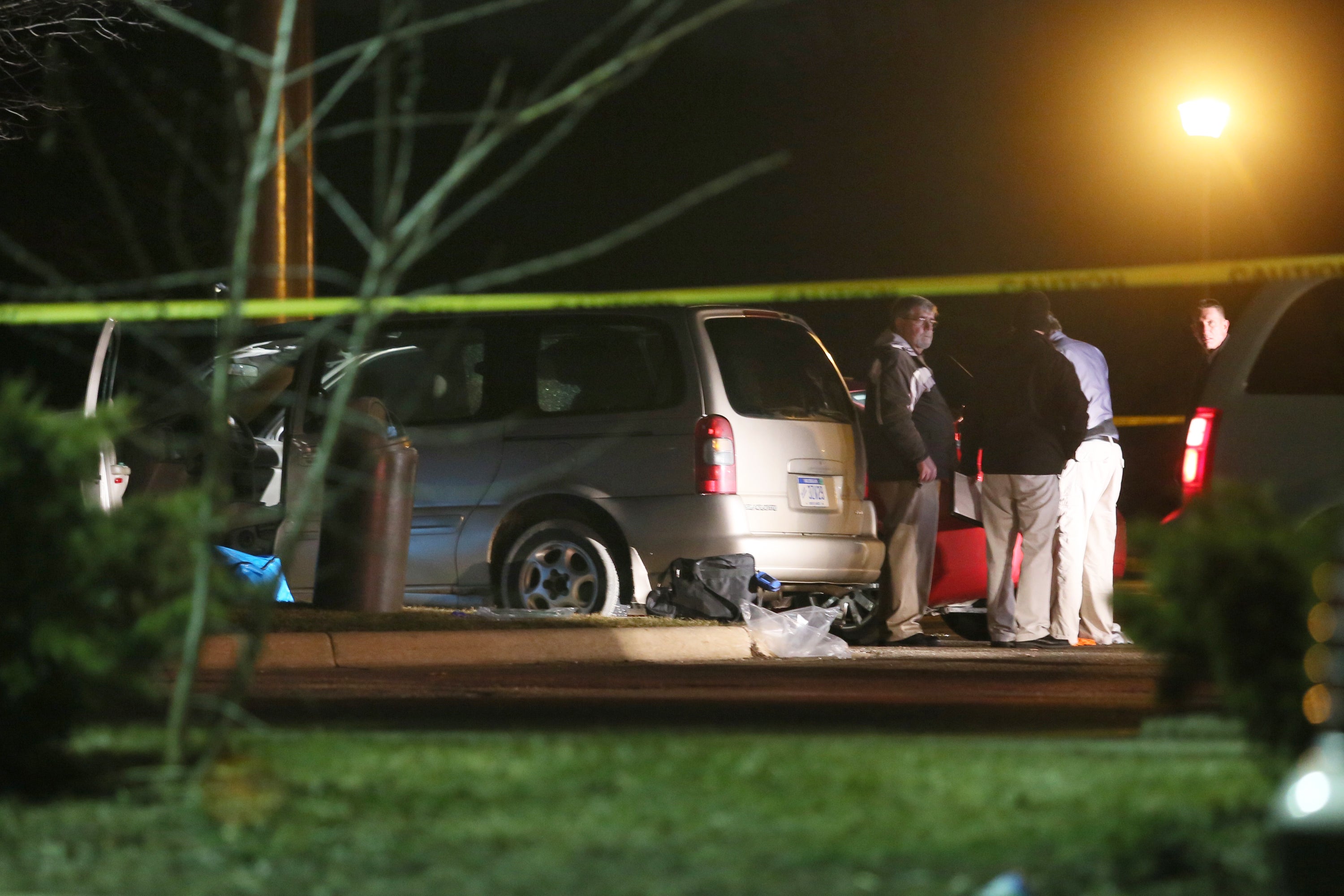 But according to a man who said he rode with Dalton 90 minutes before the shootings began, Saturday night was an entirely different story.

The passenger, Matt Mellen, in an interview with WWMT-TV, said that he had been picked up by a man who appeared to be Dalton late Saturday afternoon, and that the man had driven erratically, speeding through the streets, ignoring a stop sign and swerving through traffic.

“He wouldn’t stop,’’ Mellen said. “He just kind of kept looking at me like, ‘Don’t you want to get to your friend’s house?’ and I’m like, ‘I want to get there alive.’’’ Mellen said he left the vehicle as quickly as he could.

He later told his fiancée what had happened, and she posted a warning on Facebook and said they had called 911. He said he also contacted Uber about the harrowing ride.

Jason George, 17, said he looked out the window from his video game to see a vehicle speeding away and a woman, wounded, sitting down in the parking lot of the development. Bullet holes — at least five — peppered the side of one rental townhouse. The woman, who the authorities have not publicly identified, remained hospitalized Sunday evening. 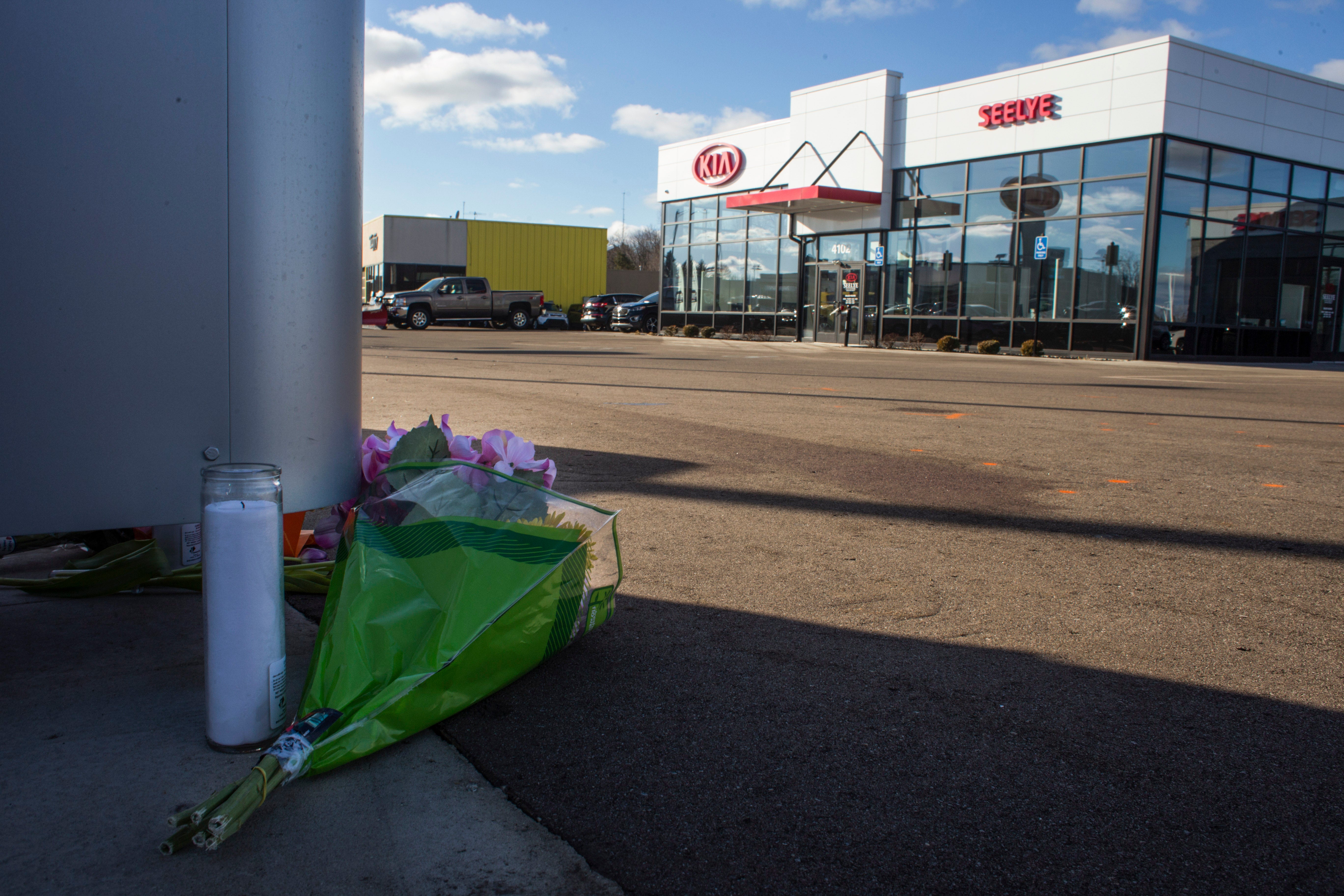 Flowers and a candle sit on the pavement outside of the Seelye Kia of Kalamazoo.

About four hours later, at a Seelye Ford and Kia car dealership in the city of Kalamazoo, more shots sounded. The authorities said Tyler Smith, 17, and his father, Richard Smith, 53, were killed.

Then, in a matter of minutes, five others were shot as they sat in two cars — parked beside one another — at the Cracker Barrel in an isolated section near an exit ramp from an interstate highway. Bullet holes were left in a windshield and the car windows.

Four women died of multiple gunshot wounds, the medical examiner’s office said. They were identified as Mary Jo Nye, 60, Dorothy Brown, 74, Barbara Hawthorne, 68, and Mary Lou Nye, 62. A 14-year-old girl, part of the group, was in critical condition at a local hospital.

In a nearby mobile home park, Chris Juenemann said she had been watching television when she heard five bangs, which she immediately recognized as gunshots. “It was just so loud,’’ she said.

Juenemann, whose family has lived there 17 years, said the restaurant was always busy, and that serious crime was rare. Juenemann said dozens of emergency vehicles soon descended on the place.

More than two hours later, Dalton was arrested. Officers from the Kalamazoo Department of Public Safety and deputies from the Kalamazoo County Sheriff’s Office spotted the suspect’s car in downtown Kalamazoo Sunday morning and pulled him over and arrested him, the authorities said. No shots were fired.

A semi-automatic handgun was found in his vehicle, and the authorities said it appeared to match the evidence from the shootings.

Investigators said Dalton was in touch with more than one person over the course of the evening, and they are examining his cellphone for more evidence.

“We are very confident that we have the right person in custody,’’ said Getting, the prosecutor.

In the rural area outside the city where Dalton lived, police searched his brown, one-story home Sunday morning. 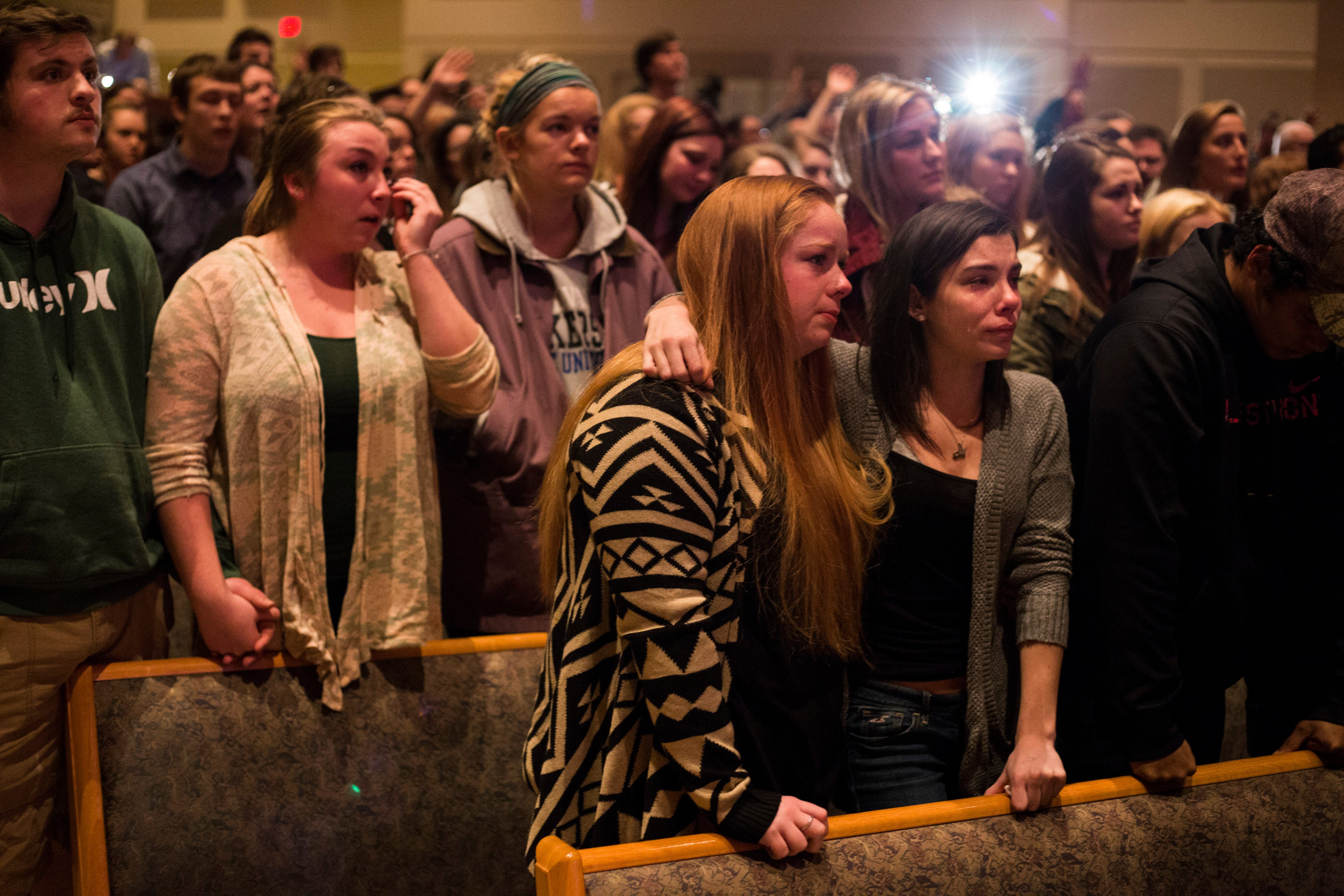 A vigil at Centerpoint Church in Kalamazoo, Michigan, on Sunday.

Sally Pardo, a retired nurse who lived across the street from him and his family, said she and her husband had always thought of Dalton as a “nice guy’’ who worked on cars in his spare time. But he used guns in a troubling manner and sometimes sounded a little paranoid, she said.

“He periodically shot his gun out the back door,’’ Pardo said. “He would shoot randomly into the air.’’

James Block, 53, who said he had lived next door to Dalton for about 15 years, said he was “well-mannered’’ and pleasant. Block noted that Dalton bought a guard dog about a year ago after an apparent burglary, and that he spoke of concerns about people passing through his backyard.

Less than an hour after the shootings ended, Dalton agreed to pick up a couple at a local pub, according to a woman who said she and her boyfriend had agreed to the ride around 11 p.m.

Minutes before the pickup, though, the couple — unaware of the shootings — happened to change their plans and rode with a different Uber driver.

“By the grace of God, we ended up canceling the Uber that we had,’’ said Carmen Morren, who provided a screenshot that showed that Dalton had been the driver for a trip that had been scrubbed. “We lucked out on that one.’’