ST. THOMAS, U.S. Virgin Islands (AP) — The last of the late-summer tourists were gone Wednesday from the U.S. Virgin Islands, ferried away from the wreckage of Hurricane Irma in cruise ships bound for Puerto Rico and Miami. Most part-time residents — and anyone else who didn’t have to stay — had cleared out as well, back to homes on the mainland with water, power and internet, and where food isn’t scarce.

Those left behind on St. Thomas and St. John were surviving on whatever they could find as they tried to repair or secure their houses with whatever materials were available. They had to dodge downed power lines that snaked through hills that were a deep green before the storm but now so stripped of leaves and trees that they are brown and desolate.

Many people were surviving on military rations handed out by U.S. Marines and the National Guard or at a local church that is serving 500 people a day.

“What I see are people coming who are hungry, who are tired, who are thirsty and need help,” said the Rev. Jeff Neevel, pastor of the St. Thomas Reformed Church in the Virgin Islands capital of Charlotte Amalie. “It’s a destruction zone. Everything is destroyed. Everything.”

His church got power Tuesday for the first time since the storm hit a week earlier, thanks to it being designated an official food distribution center. Neevel said one of the most critical needs he sees is for tarps to protect the many homes that have lost roofs.

People are also desperate for power and water so they can get back to work and return to some sense of normalcy.

“The village where I live is devastated,” said Dominique Olive from French Town on St. Thomas’ southern coast. “There are people I’ve known for many, many years. Everything they have is gone.”

Olive said there has been some “disgusting” looting and desperation but also hopeful signs. “We are helping each other. It doesn’t matter which color you are, we are all helping each other,” he said as he walked through Charlotte Amalie shortly after the curfew was lifted at noon.

Gov. Kenneth Mapp warned that it could take several weeks to restore full power and water to the territory as he angrily denounced people with “unrealistic expectations,” an apparent reaction to complaints on social media and the radio.

“If you are not prepared to go through these challenges in a realistic way, with realistic expectations, I am strongly urging you to take one of the flights or one of the mercy cruises and go to the mainland for a few months and come back,” Mapp told reporters.

Hurricane Irma lashed St. Thomas and St. John with winds of 150 mph for more than four hours when the storm hit Sept. 6. A complete damage assessment has yet to be done but many homes were left in ruins, as were police and fire stations and the main hospital. There were four deaths from the storm, as well as a power line worker killed late Tuesday while trying to do repairs.

About 5,000 tourists who couldn’t get on any of the last departing flights endured the storm’s wrath along with the islands’ 105,000 residents. St. Croix, the most populated of the islands in the chain, escaped relatively unscathed because its location some 45 miles to the south spared it a direct hit.

The storm killed at least 38 people across the northern Caribbean, including 10 in Cuba and 15 on the island shared by French St. Martin and Dutch St. Maarten. The Dutch Red Cross said 90 percent of buildings on St. Maarten were damaged and a third were destroyed by Irma’s fierce winds and powerful storm surge.

In the U.S. Virgin Islands, damage was particularly widespread on St. John, an island of stunning natural beauty that is mostly national park surrounded by coral reefs.

“You could see there was not much left,” Larry Brown, a part-time resident, said as he waited in Puerto Rico for a flight back to his home in southwestern Florida to see what damage awaited him there. “It was just horrible.”

There was some progress in getting back to normal on St. Thomas. The health department reopened a prenatal clinic and at least one water-pump station was back online. Power was restored to parts of the island, though most residents still remained in the dark and downed power lines posed a hazard. Several U.S. Navy ships were in the islands, ferrying in heavy equipment for a recovery effort led by the Federal Emergency Management Agency and its local equivalent.

Mapp said several airlines including American and Delta plan to resume flights Saturday to the St. Thomas airport, which should help bring in additional emergency supplies.

Private aid and donations have been making it to the territory as well. The governor announced that former San Antonio Spurs basketball star Tim Duncan, a native of St. Croix, would arrive in the Virgin Islands on Thursday, accompanied by former New York City Mayor Mike Bloomberg, with about $5 million in aid.

Mapp and other officials have denied reports of violence and theft in the immediate aftermath of the storm and said there have been no major crimes. But the governor did say that dozens of National Guard soldiers and police officers were on St. John and noted New York Gov. Andrew Cuomo had agreed to send 100 state troopers and National Guardsmen to relieve and assist local law enforcement personnel.

Mapp praised the response of the U.S. federal government and said President Donald Trump would visit in about a week. He said he was creating a recovery task force to help rebuild the islands and restore their tourism-based economy.

The goal, Mapp said, will be “making sure folks know we’re here, we are rebuilding and that we should not be written off as … a place to vacation.” 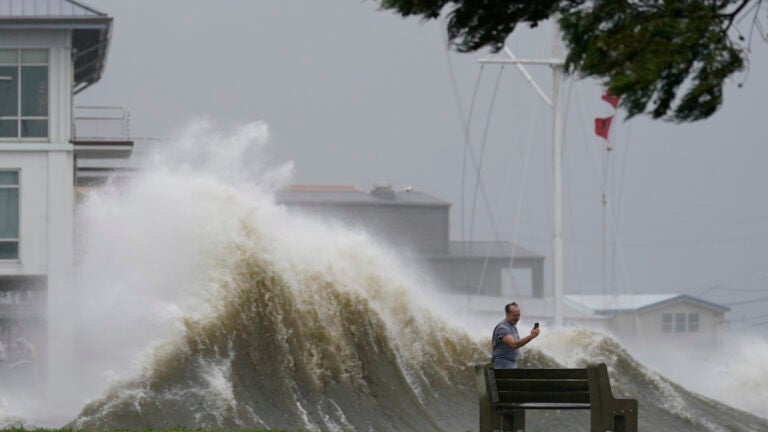 No cash or gas to run from Ida: 'We can't afford to leave'