The tree originated on a farm owned by the same family for nearly two centuries, in a part of Canada known as the balsam fir capital of the world, where reliable labor is increasingly scarce.

A trucking company run by a father and his two sons delivered the tree across a thousand snow-dusted miles, past a border that might become harder to cross if a key trade pact falls through.

The salesman in Queens, who leans on his wife and five children to help on his lot where the tree was sold, worries about competition from online rivals and nearby national chains like Home Depot.

Even Maichin, who bought the tree, is caught up in change. Around her home, which she shares with three other generations of her family, her neighborhood is rapidly gentrifying. Christmas is getting costlier.

“This year, the trees are definitely more expensive,” she said. In Lunenburg County, a chunk of Nova Scotia pockmarked by lakes and patches of balsam firs, Silver’s Farm hugs a hill with 45 acres of farmland splayed out in front and 150 acres of Christmas trees behind, all growing naturally and tightly “like the hairs on a dog’s back,” said Wayne Silver.

His operation is small, felling just 3,000 trees a season. Some Nova Scotia farms cut down tens of thousands of trees annually and even ship some overseas. Wayne Silver tows a baler on his farm, which harvest around 3,000 Christmas trees each season.

Planting the trees is unnecessary; they sprout abundantly on their own. When they are 2 feet tall, Silver selects the best specimens, and then trims back the neighboring firs to give the future Christmas trees room to grow.

As they get taller, he shears them to give them the proper shape, and pats fertilizer into the soil around their trunks. 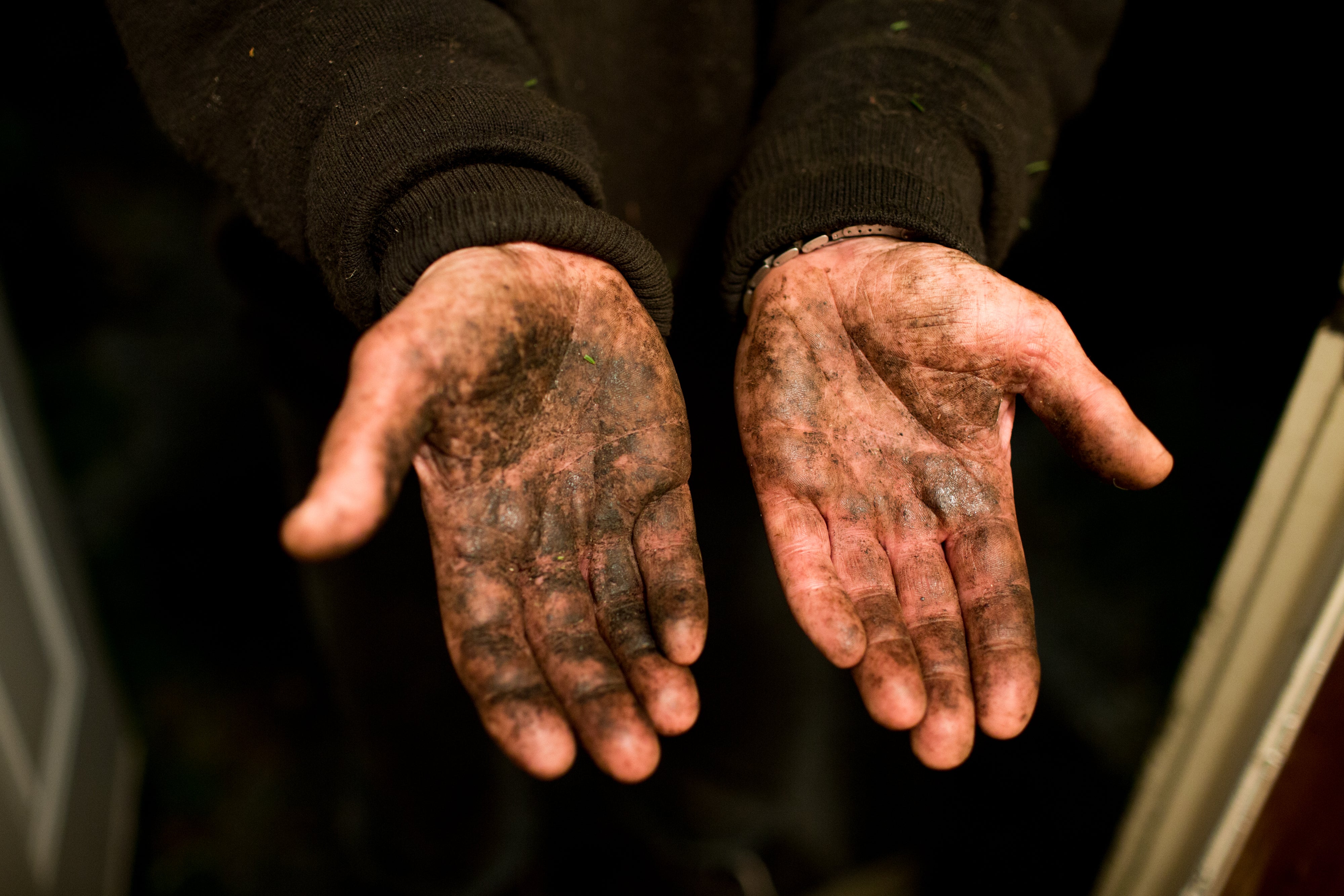 In early October, he tags the trees destined for the holiday market, using an internal calculus perfected over decades. Trees marked “#1” are deemed “perfect.” The “#2” trees are “fancy” and the “#3” trees are “choice.” Silver charges lot owners $5 to $16 for most firs.

Cutting, using a chain saw that can topple a fir in 20 seconds, starts in November, and the work is grueling. Silver puts in 12-hour days, felling, dragging and packaging the trees in twine. Even in the winter chill, sweat percolates on his face. 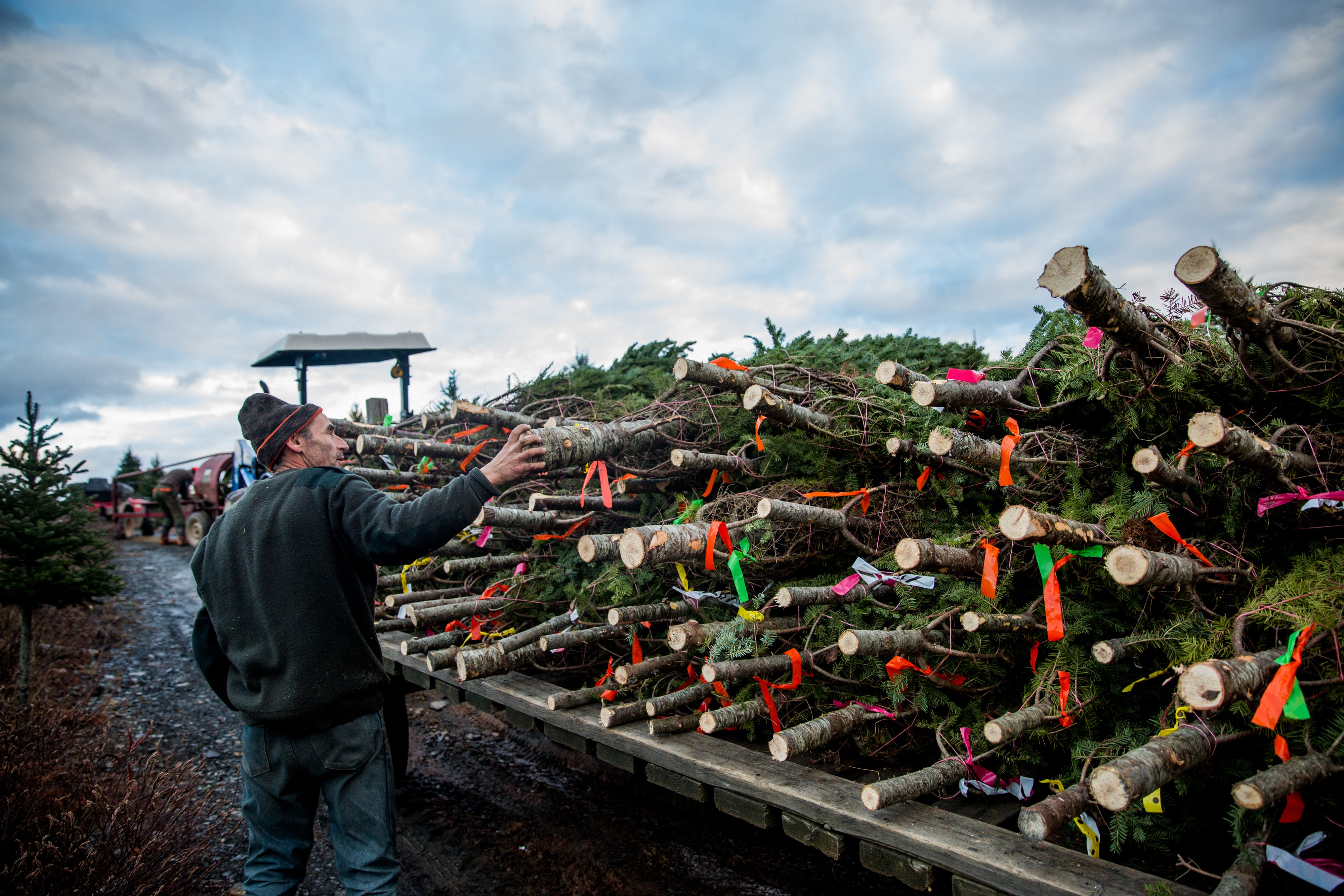 Help is scarce. In a tight labor market with low unemployment, many other tree farmers are hiring migrants from Mexico and Jamaica. Silver will likely follow suit next year.

“I just work too many long hours,” he said. 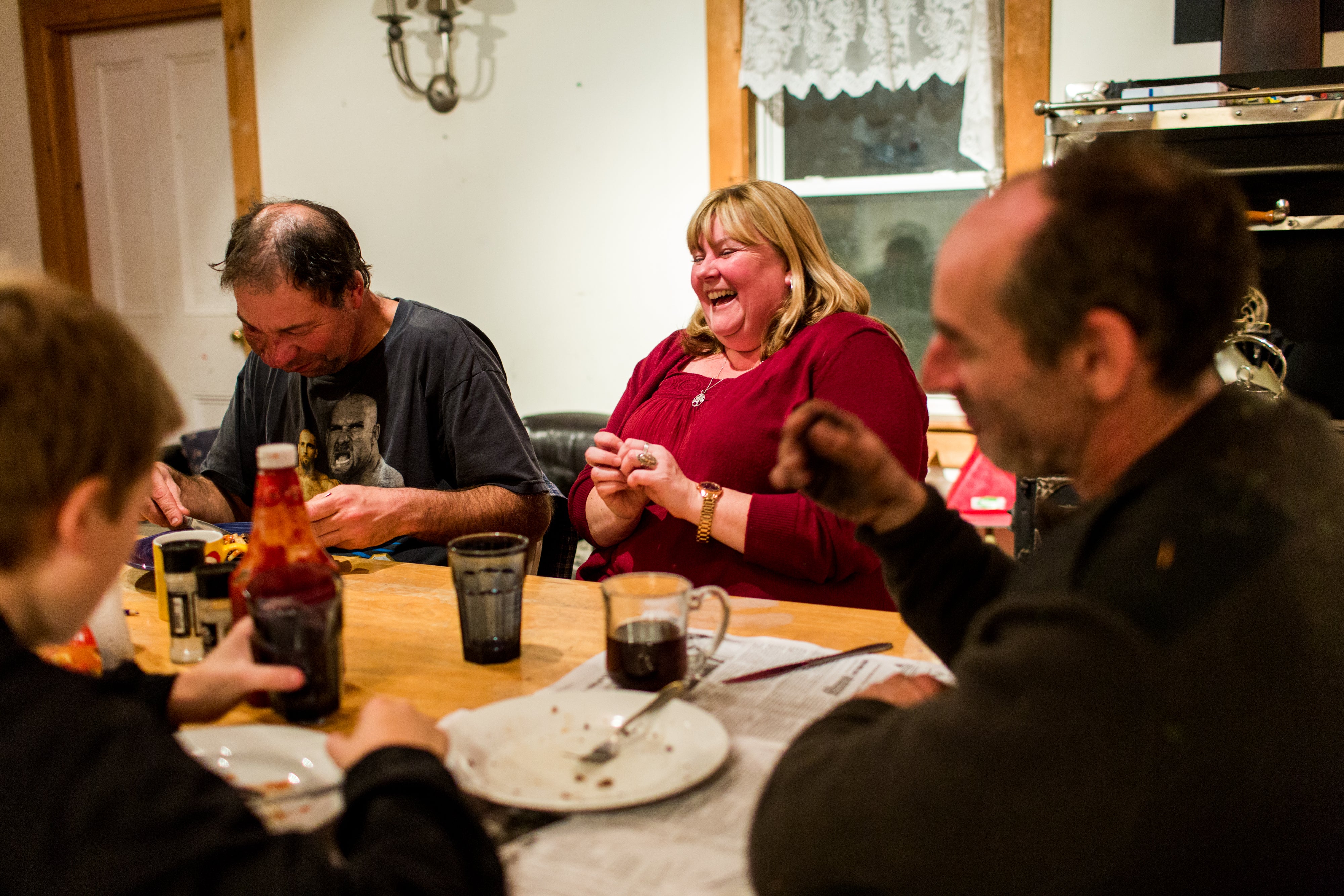 From left: Wayne Silver, left, Kelly Inness and Paul Allen eat a supper of venison and French fries during a long day of harvesting Christmas trees, on his farm.

Cutting a batch of trees for clients in New York, he stopped at sundown for a supper of venison and french fries and then worked until 1 a.m. The skeleton crew resumed at 6 a.m., and by noon, when the truck arrived to pick up the load, they had packed 700 trees into the trailer. Among them was the one that would soon claim a corner of Maichin’s living room. Wayne Silver does paperwork for another shipment.

And if the United States withdraws from the North American Free Trade Agreement, as President Donald Trump has repeatedly threatened, Silver’s costs may increase further. The fee to cross the border with merchandise, less than $100 now, could balloon to $500 to $1,000, he said.

“A lot of our stuff goes over there,” he said. “The scary thing is, if they do away with NAFTA, it’s going to cause a lot of devastation and havoc.”

For the past five years, Silver has sent several truckloads of trees to the Eastern Seaboard via G.K. Morse & Sons, a Nova Scotia trucking firm. A trailer hauls Christmas trees away from Wayne Silver’s farm.

The company brings in $6.5 million in revenue a year, said Robert Morse, an occasional trucker who handles dispatching. He and his brother, Richard, work for their father, Ken, who bought his first truck in 1956 as a way to travel.

“Most of our trade is south of the 49th parallel,” Robert Morse said, referring to the line that roughly divides the United States and Canada.

After collecting the trailer from Silver’s Farm, he hauled it half an hour away to Bridgewater. There, he met up with Keron Roberts, a driver who would take it the rest of the way.

Roberts, who has worked for G.K. Morse for nearly a year, came to Canada in 2013, looking for opportunity. He regularly sends money back home to relatives in Spanish Town, Jamaica.

“Drivers are getting old and getting retired, and the younger people want to be making a couple hundred thousand dollars a year,” Morse said. “Truckers make pretty good money, but it’s not a get-rich-quick scheme.”

After setting out with the trees, Roberts exhausted his 13-hour daily driving limit that Canada enforces on truckers and stopped in New Brunswick. He slept in the back of the cab. 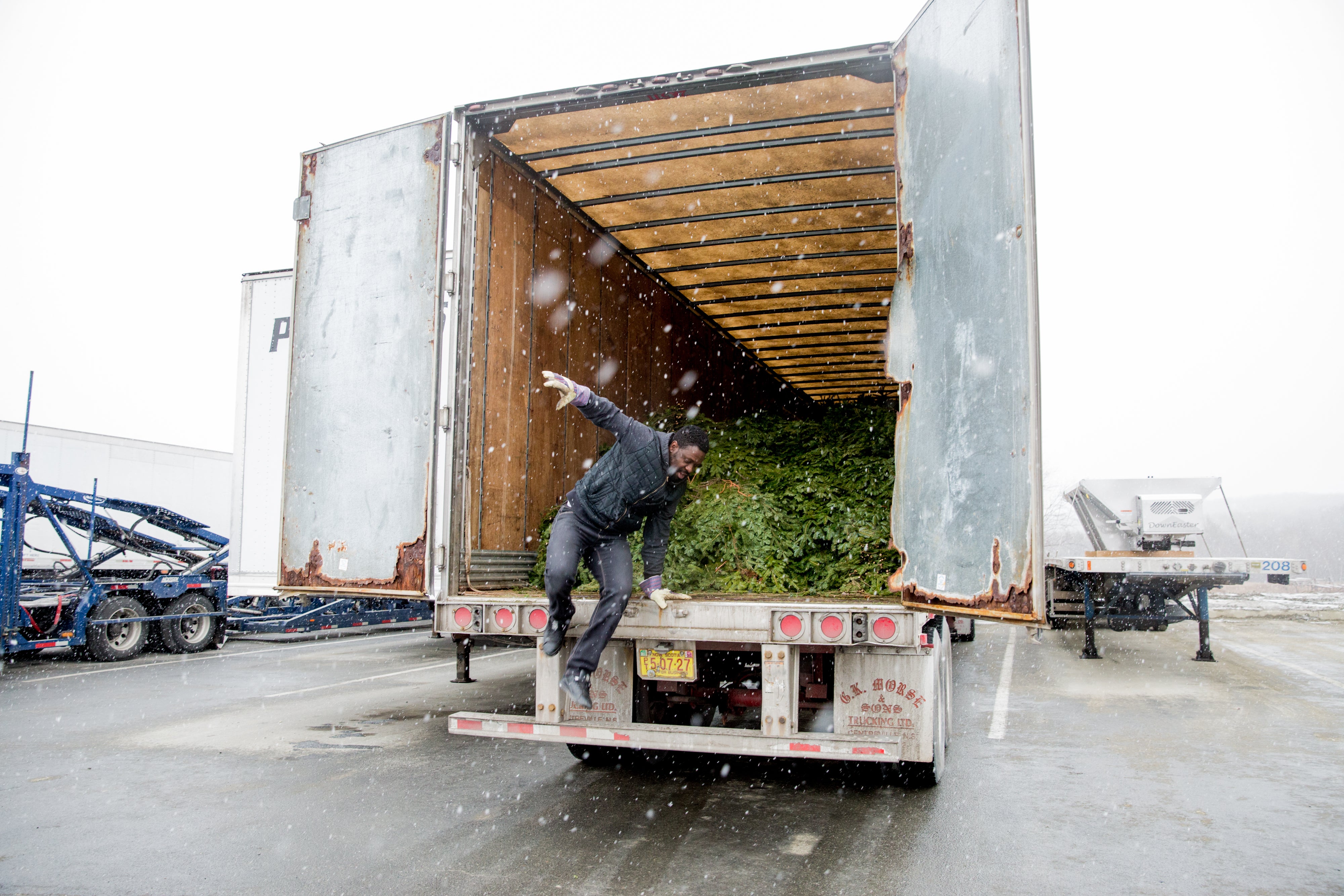 Bound for New York City, Keron Roberts checks on his load of Christmas trees from Nova Scotia at a truck stop in Maine.

Upon entering the United States, he hit a snowstorm and had to park, again, in Portsmouth, New Hampshire.

“It’s frustrating on the road sometimes,” he said. “The faster I reach my location, the more rest I can get.” 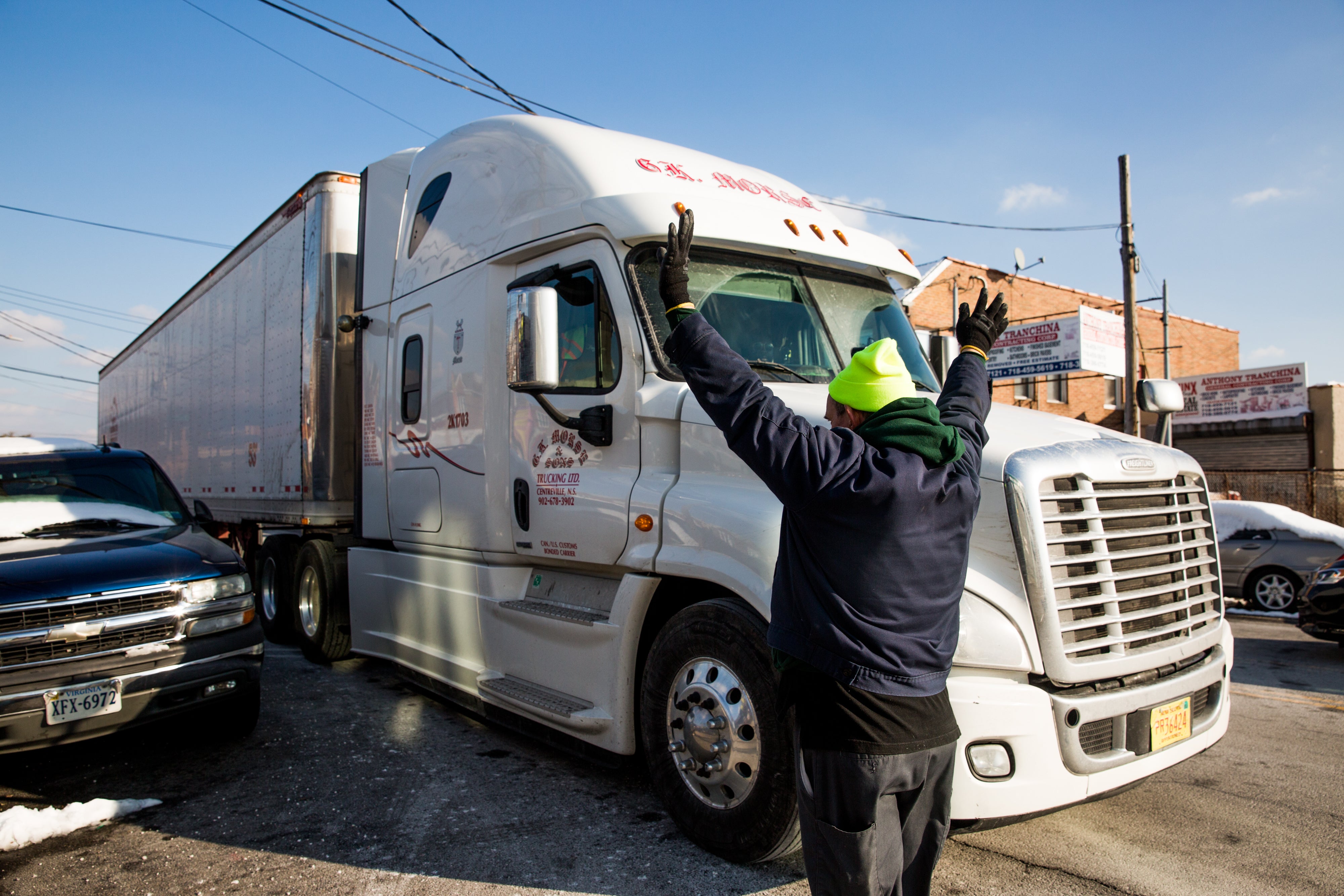 A load of Christmas trees arrives at Greenpoint Trees lot in Queens.

By the time Roberts and his truck finally pulled up to the Greenpoint Trees lot in Queens, Stephen Leddick was becoming anxious. Leddick, the owner, figures he needs a supply of about 300 trees to meet demand.

That morning, he had just 30 firs. His other lot in Brooklyn was stripped bare.

To supplement his stock, Leddick bought 80 trees from the Brooklyn Terminal Market. But they were not cheap: He paid an 80 percent premium over the cost of buying and shipping a fir from Silver’s Farm. 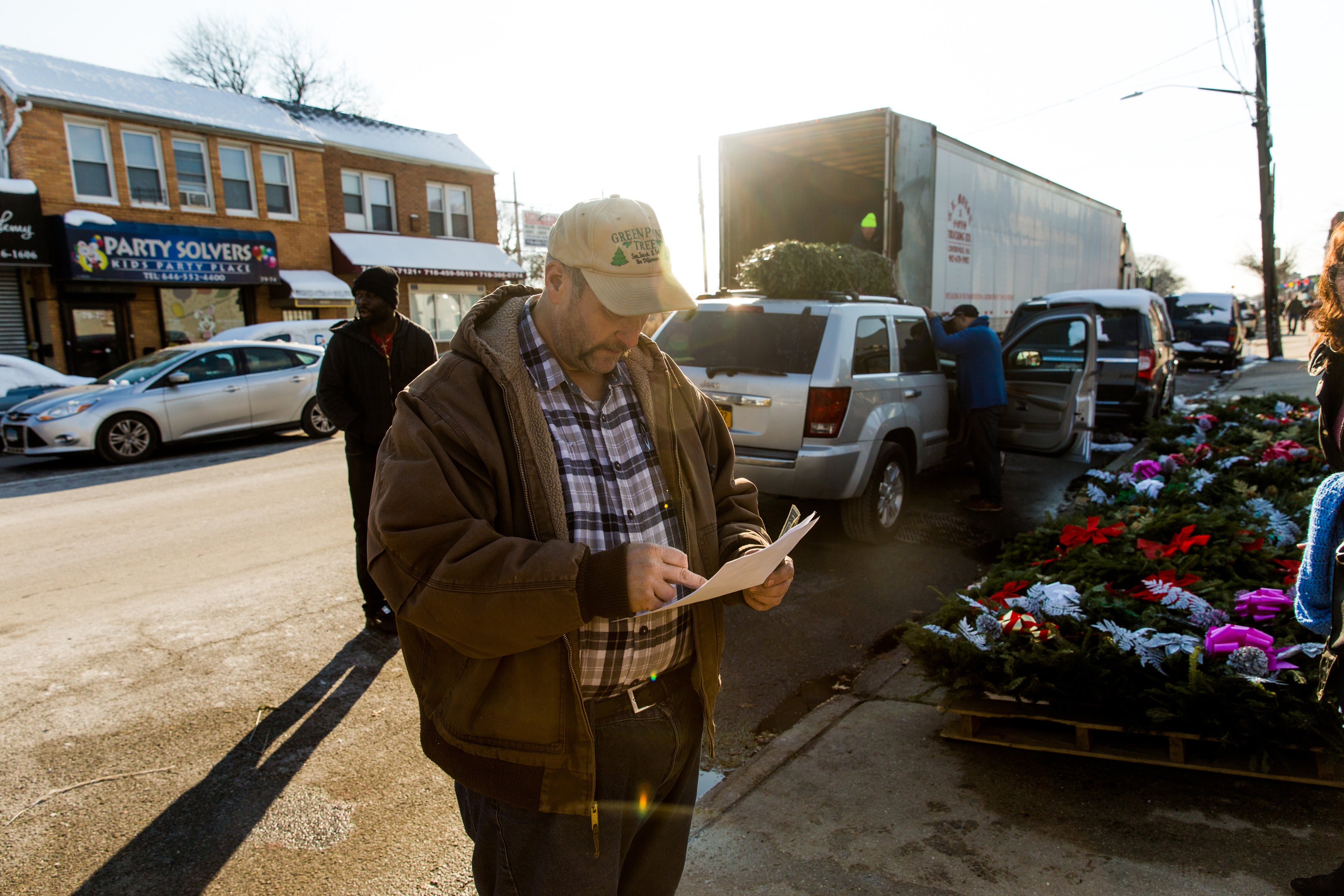 Stephen Leddick, a Christmas tree seller in New York, checks the manifest while taking a delivery of trees from truck driver Keron Roberts.

The 24-hour Queens lot, bunched onto a sidewalk near the Atlas Park Mall, has no permit to operate. Few Christmas tree sellers in New York do.

A quirk in the local administrative code allows the seasonal entrepreneurs to set up coniferous trees for sale on any public sidewalk in December without getting permission from the city.

Christmas trees are unloaded at Stephen Leddick’s lot in Queens.

Some sellers take advantage of the lack of paperwork, disappearing once the season ends and stiffing their suppliers, Leddick said — quickly adding that he was not one of them.

A week earlier, Maichin purchased grave blankets from Leddick for her father, who is buried in the cemetery nearby. Today, she came for trees, and haggled for three, one for each floor of her brick town house in Ridgewood, ultimately paying $45, $65 and $75. 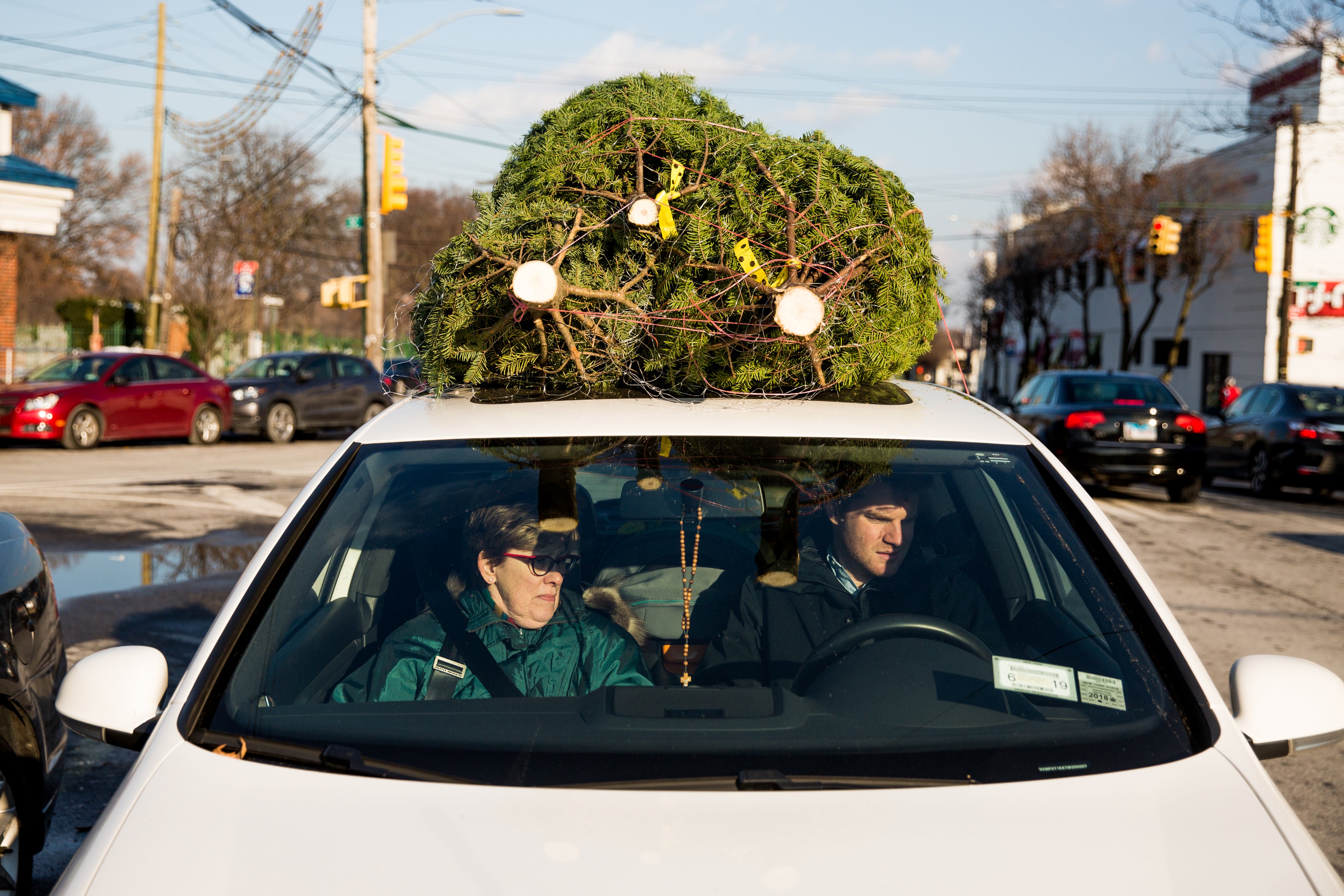 Lisa Maichin and her son-in-law Keaton Babb drive off with their Christmas trees at a lot in Queens.

Leddick opened the Brooklyn lot in 1990 and the Queens location in 2005. Someday, he said, he would love for one of his sons to take over the business, allowing him to open his own “soup to nuts” gardening center. But for now, with multiple children on the college track, he cannot spare the capital.

Besides, working 18 hours a day at the lots and at his day job as a construction superintendent, he is simply too tired. 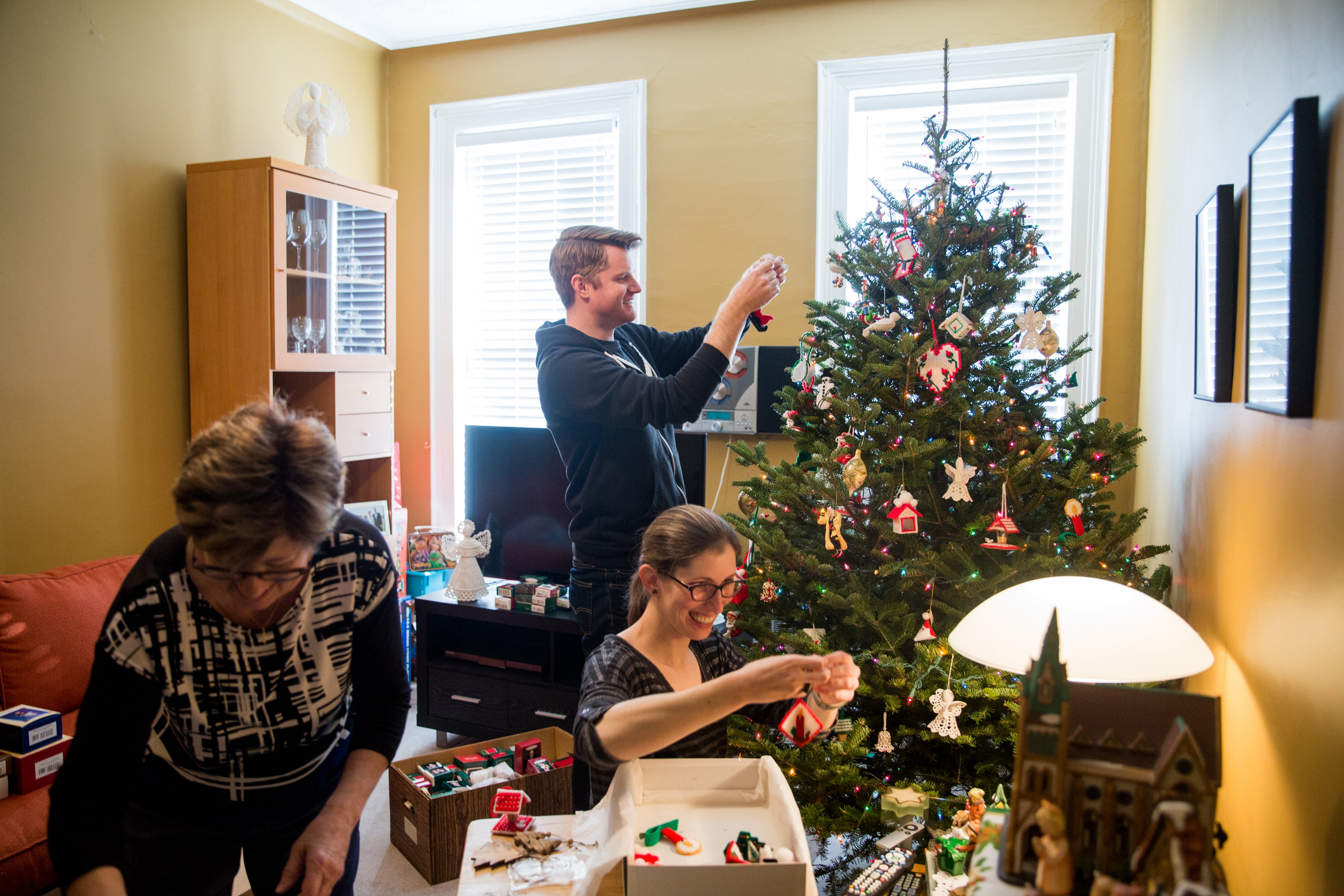 The Maichin family put up ornaments on one of their Christmas trees.

The next day, Maichin and her family began decorating the tree on the top floor, in a living room ringed with family portraits and wedding photos. The group — Maichin, her daughter Melissa Babb, son-in-law Keaton Babb and infant granddaughter, Karolina, observant in her bouncer seat — rifled through a collection of family ornaments compiled over three decades.

Many of them were knitted by Maichin’s mother, who lives downstairs.

Maichin’s parents, who were Austrian immigrants, bought the house when she was in fourth grade. A recently retired administrative assistant, she now barely recognizes her neighborhood.

But the family vowed to retain its community spirit, pledging to patronize Greenpoint Trees again next year.

“We try to shop small and shop local whenever we can,” Melissa Babb said, adding, sheepishly, “with the exception of Amazon.”