WASHINGTON (AP) — Michael Avenatti wants to be clear: He does not bluff.

A year ago, the attorney was in the closing days of a jury trial, facing off against a company he had accused of making faulty surgical gowns. When the other side questioned his plans to bring a plant manager in from Honduras to testify, Avenatti hopped on a plane to Central America to persuade the man to come to Los Angeles and take the stand.

“We did our homework. We did what we needed to do. We put him on on a Friday afternoon. And it was devastating to the defense,” said Avenatti, who went on to win a $454 million jury judgment.

Daring Trump to underestimate him, Avenatti, 47, says this case is a natural fit for a “dragon slayer” who has spent his career trying to help Davids fight Goliaths.

So far, the say-anything president has been conspicuously quiet on Daniels, though the White House says he denies her claims. Daniels made her case in a widely viewed interview with CBS’ “60 Minutes” that aired Sunday, saying that she had sex with the married Trump once in 2006 and that a man threatened her with physical harm in 2011 if she went public with her story. Trump lawyer Michael Cohen paid her $130,000 days before the 2016 presidential election as part of a nondisclosure agreement she is seeking to invalidate.

Avenatti said on NBC that there was “no question” Trump knew about the agreement. On Daniels’ behalf, he offered to return the $130,000. He teased that Daniels had been “physically threatened.” He tweeted a 2011 photo of her strapped to a chair taking a polygraph test about Trump.

He has appeared more than once on CNN alongside Cohen’s lawyer, David Schwartz. The two got into a heated spat this week in which Avenatti bombarded his sparring partner with chants of “Thug! Thug! Thug!”

Avenatti will not detail exactly how he first connected with Daniels, but he insists there are no secret financial interests paying him or Daniels.

Those who know Avenatti are not surprised to see him taking on this fight.

“Michael was chomping at the bit to get involved in litigation from the first day he walked into law school,” said Jonathan Turley, a George Washington University law professor who taught Avenatti. “He thrives on the pressures that come with litigation.”

Past cases have pitted Avenatti against Hollywood stars, corporations, even the National Football League.

William Cornwell, an attorney in Boca Raton, Florida, called him “one of the most talented trial attorneys I’ve ever had the experience of trying a case against.”

Outside the courtroom, Avenatti has boundless energy for any number of high-stakes interests. In his free time, he turns to fast cars, participating in more than 30 professional sports car races in the United States and Europe since 2010. Several years ago, he bought a Seattle coffee shop chain in a deal that saw him partnering with — and then sparring with — actor Patrick Dempsey. Avenatti said he sold his own share of the troubled chain and now just offers legal assistance.

He survives on four or five hours of sleep a night, throws around phrases like “Life is not a dress rehearsal” and often ends his tweets with “#basta” — enough.

A graduate of the University of Pennsylvania — which also counts Trump as an alumnus — and GWU law school, Avenatti said his drive to take on the powerful dates to his teenage years when he saw his father unexpectedly lose his job, something he said was “devastating” to his family.

As Avenatti’s profile has grown, Trump’s followers on Twitter have taken notice and tried to establish that Avenatti is a Democratic operative. His own website mentions that he worked for Chicago Mayor Rahm Emanuel before Emanuel worked for the Clinton and Obama administrations. Avenatti says he was an investigator of political campaigns and corporations around the mid-1990s and hasn’t communicated with Emanuel since 2007.

An Associated Press review of federal records shows that Avenatti has not made individual political donations since 2007. From 2003 to 2007, he gave $5,750 to an assortment of California and national Democratic Party candidates, including the presidential campaigns of John Kerry, John Edwards and Dick Gephardt.

Avenatti denies that the Daniels case has anything to do with politics and says he even supports some things Trump has done as president, including deregulation and tax cuts.

Still, he says he and Trump are not the same kind of guy.

“I’m not a guy that was born with a silver spoon in my mouth and a real estate portfolio in Manhattan,” he said. “I’m a street fighter with an Ivy League degree.” 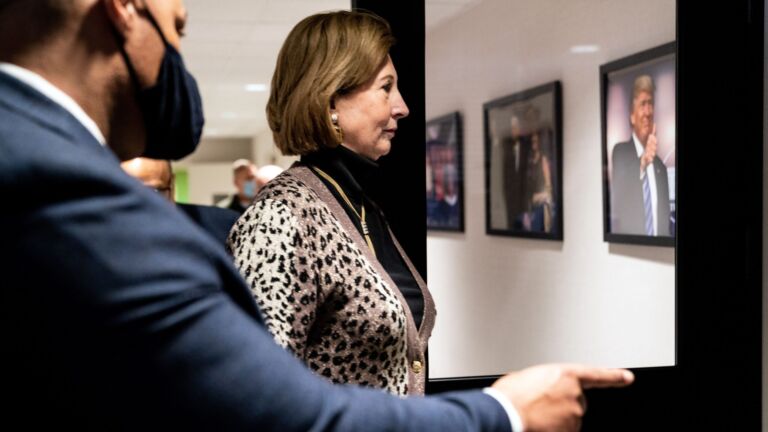