SANTA FE, Texas (AP) — The Texas student charged in the school shooting at Santa Fe High School described planning the attack in private journals, including a plan to kill himself, posted an image on Facebook of a ‘‘Born to Kill’’ shirt and used his father’s shotgun and pistol in the rampage that left 10 dead and 10 wounded, authorities said Friday.

A motive wasn’t immediately clear, but Gov. Greg Abbott said Dimitrios Pagourtzis, 17, wrote about planning the attack in journals on his computer and in his cellphone that police obtained. That was inconsistent with the portrait painted by his friends — a reserved young man, an athlete who had discussed wanting to own guns but who was said not to have given warning signs of impending violence.

‘‘Not only did he want to commit the shooting but he wanted to commit suicide after the shooting,’’ Abbott said, adding that Pagourtzis told authorities he ‘‘didn’t have the courage’’ to take his own life.

President Donald Trump ordered flags to be lowered to half-staff in honor of the victims and their families. 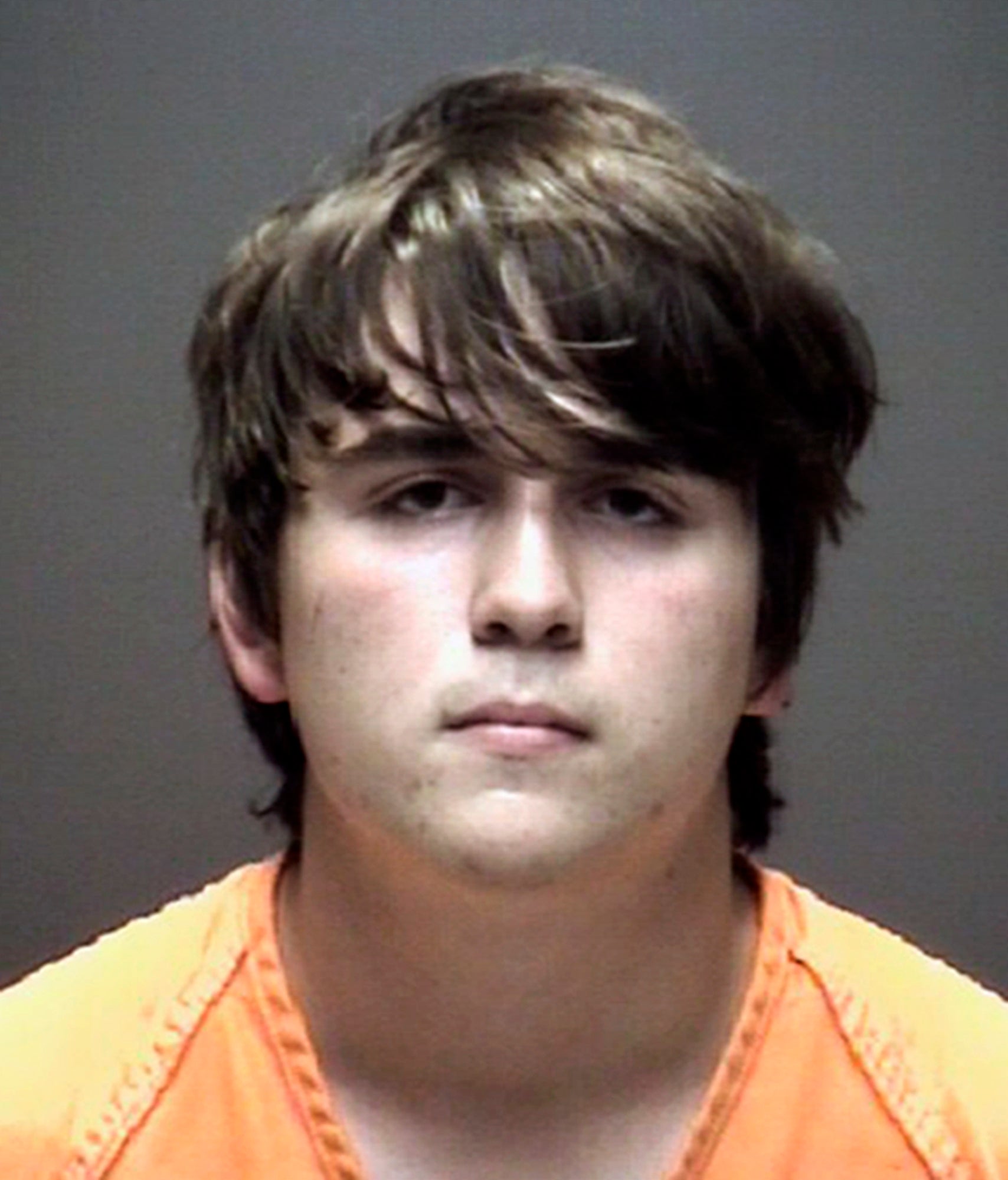 Pagourtzis was held without bond in the Galveston County jail on charges of capital murder, said the county sheriff, Henry Trochesset. Abbott said the two guns used in the attack were owned legally by the suspect’s father. It was not clear whether the father knew his son had taken them.

The governor also said explosive devices including a Molotov cocktail had been found in the suspected shooter’s home and a vehicle as well as around the school and nearby.

Abbott said at a news conference that ‘‘unlike Parkland, unlike Sutherland Springs, there were not those types of warning signs.’’ He was referring to the Feb. 14 school shooting in Florida and one in November inside a church in a town near San Antonio. Abbott said the early investigation showed no prior criminal history for Pagourtzis — no arrests and no confrontations with law enforcement.

That same Facebook profile that included pictures of the ‘‘Born to Kill’’ shirt described Pagourtzis as planning to enter the U.S. Marine Corps next year, but the Marine Corps told The Associated Press it has reviewed its records and found no one by that name as either a recruit or a person in their delayed entry pool.

A woman who answered the phone at a number associated with the Pagourtzis family declined to speak with the AP.

‘‘Please don’t call us. Give us our time right now, thank you,’’ she said.

Classmates described Pagourtzis as quiet, an avid video game player who routinely wore a black trench coat and black boots to class. He had played football on the school’s junior varsity squad and danced as part of a church group. Those who know him expressed shock he might be involved in the killings.

In addition to Pagourtzis, a second person was detained in relation to the attack. That person was not identified.

Branden Auzston, 17, a junior at Santa Fe High School, said he was sitting in his history class watching a movie when he heard the fire alarm. At that moment, he thought it was just a fire drill, so he and his girlfriend, Daisy Sullivan, walked outside the building with other students. But Auzston said he thought it was odd the school was having another fire drill after having had one about two weeks ago.

‘‘We go outside like normal. We’re told to get in the grass,’’ he said.

Auzston said once he was outside, he heard two bangs but thought it was either a door slamming or the lid of a dumpster slamming down.

Then he heard three more bangs, and panic set in.

‘‘Then I see Mr. Vaughn run hysterically and screaming, ‘Just run.’ At that point you have 500 students just running off to get as far off as possible.’’

Daniel Vaughn is a history teacher at the high school.

David Marshall, the University of Texas Medical Branch’s chief nursing officer, said Santa Fe school resource officer John Barnes, the first person to engage the suspected shooter, was in surgery for injuries from a gunshot wound to the arm. The shot damaged the bone and a major blood vessel around his elbow.

Tristen Patterson, a 16-year-old junior at Sante Fe, considered Pagourtzis a friend. He said Pagourtzis was into video games that simulated war, and that he sometimes talked about guns — firearms that he liked or wanted to get. ‘‘But he never talked about killing people or anything like that,’’ Patterson said.

He said Pagourtzis didn’t show signs of being bullied but also rarely talked about himself. In one of their classes, Pagourtzis would sometimes enter the room ‘‘acting a little bit down or sad. A little bit sluggish,’’ Patterson said.

Father Stelios Sitaras of Assumption of the Virgin Mary Greek Orthodox Church in Galveston, Texas, said he met Pagourtzis when the young man danced with a group as part of an annual festival in October. He said the Pagourtzises are members of a nearby parish.

Sitaras said he had never heard of the teen being in any sort of trouble.

‘‘He is a quiet boy,’’ the priest said. ‘‘You would never think he would do anything like this.’’

Michael Farina, 17, said he grew up with Pagourtzis and would play video games with him. He said Pagourtzis knew a lot about guns and remembered him asking which one he should get when he was older.

‘‘I’m kind of dumbfounded. We didn’t get any warning,’’ Farina said.

He said a black trench coat and black boots was Pagourtzis’s regular outfit to school. ‘‘I guess you could say it was his kind of style,’’ Farina said. He said he wasn’t someone who got into trouble and described him as a ‘‘run of the mill’’ student.