ST. AUGUSTINE, Fla. (AP) — A 23-year-old man was injured after breaking into an alligator farm in Florida and jumping into a pond full of crocodiles, police said.

Police officers responding to reports of vandalism early Tuesday at the Alligator Farm Zoological Park found the underwear-clad man with an injured leg crawling across a nearby yard.

Officers found two rubber Croc shoes and a pair of shorts inside the newly-opened Nile crocodile enclosure, St. Augustine police spokeswoman Cecilia Aiple told The Florida Times-Union . They also saw a bloody trail leading to the top of a nearby structure. Outside, in a neighboring yard, officers found Brandon Keith Hatfield. He was arrested, charged with vandalism and taken to a hospital where he tried to escape before getting caught in a retention pond lined with barbed wire, police said.

Hatfield told investigators he had been bitten by an alligator. They pieced together the details based on the evidence and the call reporting the suspicious man crawling in the yard.

“He … took a jump into a pond infested with big crocodiles,” Aiple said.

John Brueggen, director of the alligator farm, told the newspaper that Hatfield apparently got inside the park on Monday night and damaged the snack bar before going into the crocodile enclosure, called “Oasis on the Nile.”

“He jumped off a 5- to 6-foot structure into about 2 feet of water, then climbed up on the 20-foot structure later, which we know from the blood trail,” Brueggen said. “In our 125-year history, this is the first time anyone has tried to go swimming with the crocodiles.”

According to the arrest report, security video showed a 9-foot (2-meter) crocodile lunging at the man who escaped to the edge of the pool. When he sits on the bank of the pool, the “crocodile locks onto his left foot.”

Hatfield caused about $5,000 in damage, authorities said. He was arrested and is being held without bond. Records don’t list an attorney for him. 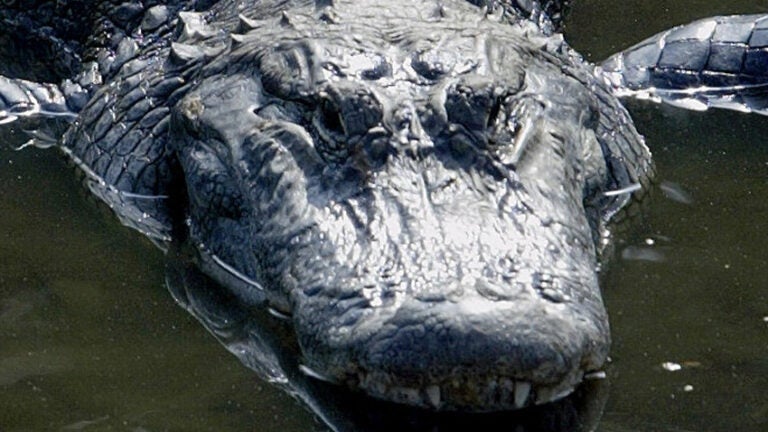 A man was hunting hogs in Florida. Then he was bitten by an alligator.