JUPITER, Fla. — Something was amiss at a massage parlor near one of the wealthiest barrier islands in Florida.

First, a health inspector spotted several suitcases. Then she noticed an unusual stash of clothing, food and bedding. A young woman who was supposed to be a massage therapist spoke little English and seemed unusually nervous.

The inspector reported her findings to the police. They would eventually learn that her suspicions were right: The women were not just employees: They were living in the day spa, sleeping on massage tables and cooking meals on hot plates in the back. Some of them had had their passports confiscated.

The inspector’s suspicions prompted a sprawling investigation across four Florida counties and two states — Florida and New York — over nearly eight months, resulting in the disruption of what authorities say was a multimillion-dollar human-trafficking and prostitution operation.

Beyond the lurid celebrity connection, however, lies the wretched story of women who the police believe were brought from China under false promises of new lives and legitimate spa jobs. Instead, they found themselves trapped in the austere back rooms of strip-mall brothels — trafficking victims trapped among South Florida’s rich and famous.

“I don’t believe they were told they were going to work in massage parlors seven days a week, having unprotected sex with up to 1,000 men a year,” said Sheriff William D. Snyder of Martin County, whose office opened the investigation. “We saw them eating on hot plates in the back. There were no washing machines. They were sleeping on the massage tables.”

The women were shuttled from place to place — not only to nearby parlors but also across the state, Snyder said. Sheriff’s deputies in Orange County, Florida, became involved in the investigation when women from the state’s Treasure Coast region were traced back to the Orlando area.

Snyder said he believed at least some of the women were working to pay off debt owed for what it cost to bring them to the United States. In some cases, the women’s passports were taken away. Traffickers cycled women in and out of parlors every 10 or 20 days, Snyder estimated. Kraft was among the hundreds of men charged with paying for sex in one of spas targeted by officials.

Yet making a trafficking case remains difficult, in part because the women who were victims may not want to cooperate with the police. Only one has been talking to deputies, Snyder said. He had lined up about a dozen Mandarin interpreters, but many other women refused to speak and were let go with an offer of assistance.

“I would never consider them prostitutes — it was really a rescue operation,” the sheriff said, training his anger at the men whose demand for sex kept the massage parlors in business. “The monsters are the men,” he added.

In addition to arresting men ranging in age from their 30s to at least one in his 80s, police charged several women who appeared to be overseeing the operation with racketeering, money laundering and prostitution.

Snyder said investigators, who worked with Immigration and Customs Enforcement, estimated the trafficking ring to be a $20 million international operation. Men paid between $100 and $200 for sex, the sheriff said; between $2 million and $3 million has been seized in Florida, he said, including a safe stuffed with Rolex watches. The lobby area of the now closed Orchids of Asia Day Spa on Saturday.

State Attorney Dave Aronberg of Palm Beach County, whose office leads a human-trafficking task force with the FBI, said trafficking foreigners to work in places like massage parlors can be more difficult to root out than trafficking, for example, American girls who are recruited in person or online.

“They come from countries where the police are part of the problem, and they’re smuggled into the country,” Aronberg said.

Laura Cusack, a social worker in charge of the human-trafficking prevention and education program at Place of Hope, an agency for foster children and trafficking victims in Boca Raton, said foreign victims were often threatened by traffickers in their home countries.

Havens, the former Citigroup executive, was elevated to the post in 2011 by his longtime confidant, Vikram Pandit, Citi’s chief executive. The two became friends as senior executives at Morgan Stanley before they both left in 2005 to start Old Lane Partners, a hedge fund that was acquired by Citigroup two years later for $800 million. Both resigned from Citi on the same day in 2012, after the Federal Reserve indicated Citi was not healthy enough after the financial crisis to start paying more money back to shareholders.

Through a spokesman, Kraft, 77, denied engaging in illegal activity, and Childs in a statement to Bloomberg also denied the charges. 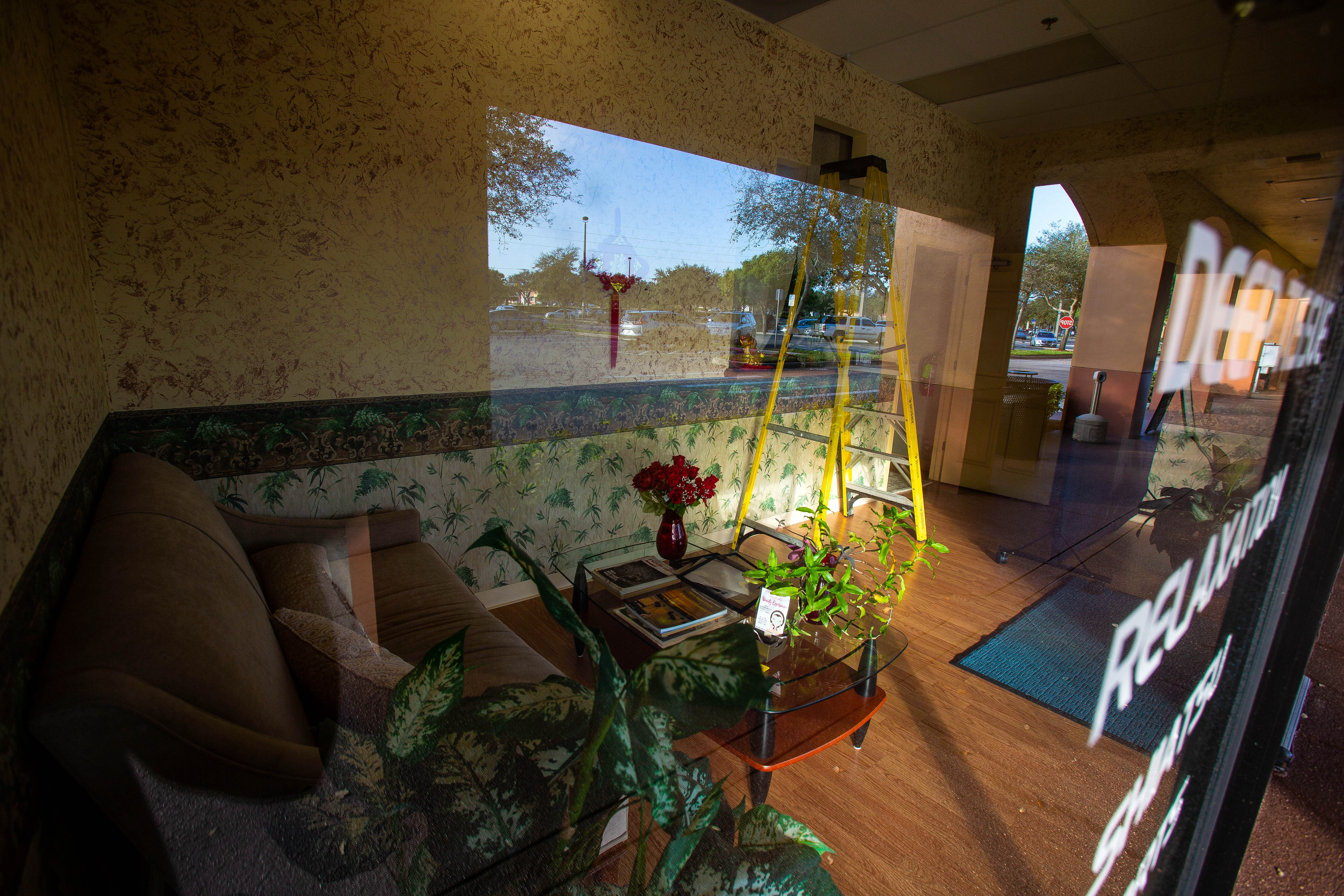 The investigation began in July at Bridge Day Spa in Hobe Sound, Florida, where a health inspector noticed an unusual supply of clothing, food, bedding and luggage full of condoms.

That such a lucrative trafficking network existed near the ritzy enclaves of Jupiter Island, home to the likes of golfer Tiger Woods, and Palm Beach, home to President Donald Trump’s Mar-a-Lago estate, seemed unfathomable to some of the gawkers who posed for selfies — and in some cases cracked off-color jokes — Friday outside the Orchids of Asia massage parlor in Jupiter, the enterprise that officials said Kraft had visited.

But Palm Beach was also the place where a well-connected billionaire financier from New York, Jeffrey E. Epstein, was accused a decade ago of molesting dozens of underage girls — some of them runaways or foster children who are vulnerable to sex trafficking. A federal judge ruled Thursday that prosecutors violated Epstein’s victims’ rights by failing to inform them of a plea deal that would protect him from sex-trafficking charges.

The massage-parlor investigation began farther north, in Hobe Sound, a strip of mainland in Martin County where on July 6 the health inspector reported the signs of potential trafficking at the Bridge Day Spa, according to the arrest affidavit for one of the men. Sheriff’s deputies identified the spa’s owner and another nearby property under her name. They searched online forums where users posted about sex acts performed at the massage parlors. Based on the evidence they collected, they obtained a warrant to conduct surveillance.

That approach was far more labor-intensive than past investigations, in which undercover deputies would go into the parlors and arrest women for prostitution, said Snyder, a former Republican state representative who helped write Florida’s law against human trafficking.

“I made this decision that we had enough of that: Let’s go after the traffickers,” he said. “I feel, on some level, extremely dissatisfied that I can’t do more. I know that we don’t even make a dent.”

The shuttered Orchids of Asia Day Spa on Friday.

In the case of the Orchids of Asia parlor in Jupiter, where services were listed for $59 for half an hour or $79 for an hour, an arrest affidavit for the women managing the spa detailed a similar investigative approach. Police watched men going into the spa for 30 to 45 minutes at a time.

Once they left, officers followed the men, pulled them over for traffic violations and confronted them about paying for sex. That evidence led to warrants for surveillance cameras, which police secretly installed inside the massage parlors — apparently under the ruse of a possible bomb threat.

All of the men arrested in Jupiter were filmed paying for manual or oral sexual stimulation, according to police. Snyder said the sex acts his deputies recorded in Martin County included sexual intercourse.

Law enforcement spent several weeks identifying the clients, and the women managing the trafficking victims, as well as tracing their finances. Police and prosecutors wrote up their criminal charges and raided the massage parlors Tuesday.

By then, however, some of the women they had identified as victims had been moved elsewhere. New women had taken their place. 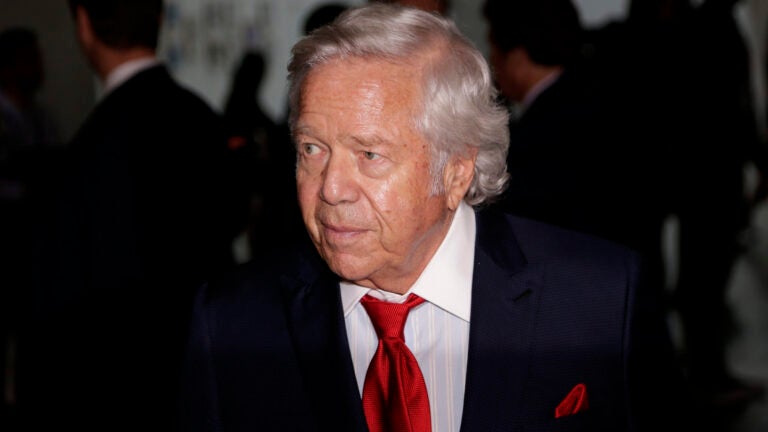