LAS VEGAS (AP) — Nevada gambling regulators fined casino mogul Steve Wynn’s former company a record $20 million on Tuesday for failing to investigate claims of sexual misconduct made against him before he resigned a year ago.

The penalty against Wynn Resorts Ltd. ends an investigation that began after The Wall Street Journal reported that several women said the company founder harassed or assaulted them.

Wynn Resorts will keep its gambling license under the Nevada Gaming Commission settlement reached last month that left the amount of a fine to be determined by the four current commissioners.

Steve Wynn himself is not part of the Wynn Resorts settlement.

He resigned as board chairman and company CEO in February 2018 following reports that several women said he harassed or assaulted them. Wynn also sold his shares in the company. He has denied the allegations.

Wynn Resorts acknowledged in the settlement agreement that several former board members and executives knew about but failed to investigate complaints including one that led Wynn to pay $7.5 million in 2005 to a former salon employee who alleged he raped her and that she became pregnant as a result.

Documents say the company also failed to investigate a cocktail server’s allegation that from 2005 to 2006 Wynn pressured her into a nonconsensual sexual relationship. Wynn paid a $975,000 private settlement to that woman and her parents, the settlement states.

“The company’s initial response during this period was driven by Mr. Wynn’s adamant denial of all allegations,” said a Wynn Resorts statement provided by company spokesman Michael Weaver. It admitted a “short-sighted focus on initially defending Mr. Wynn, rather than reassuring employees of the company’s commitment to a safe and respectful work environment.”

The company points to wholesale changes in the boardroom and executive offices since the allegations were made public, including hiring a new chief executive, requiring new sexual harassment prevention training for all employees and adding a women’s leadership council to promote equality in the workplace.

“In sum, these 25,000 employees, led by CEO Matt Maddox and a reshaped board of directors, are the company that stands before the commission today, and not Steve Wynn,” the company said in its Jan. 25 written agreement to settle the case.

A company settlement also is pending in Massachusetts, where gambling regulators launched a similar probe a year ago of whether Wynn Resorts should be allowed to operate a more than $2 billion waterfront casino resort slated to open in June in the Boston area.

Wynn sued to block the release of a Massachusetts Gaming Commission report on that investigation, arguing it contains confidential information that is protected by attorney-client privilege. A Nevada state court judge has temporarily blocked release of that report. A hearing in that case is scheduled Monday.

A former shareholder alleged in a case filed in December that his stock plummeted in value because company officials concealed information about accusations against Wynn.

Records show that Wynn Resorts traded at more than $200 per share before the Wall Street Journal report, and closed at about $165 after Wynn resigned. 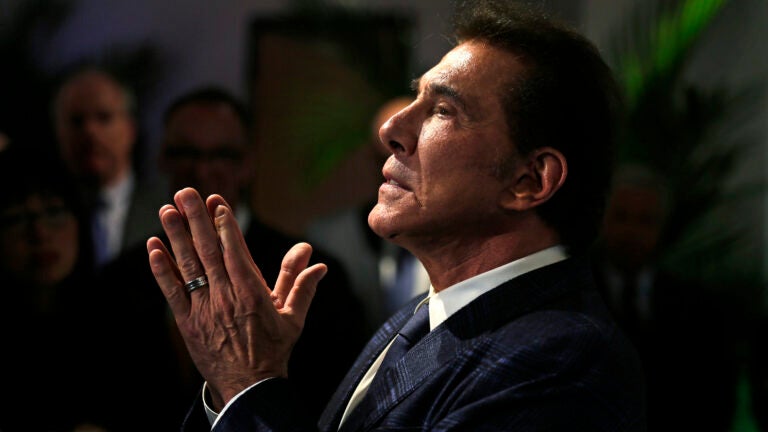 US sues casino mogul Steve Wynn over relationship with China