On the grainy surveillance footage, it looked like the woman driving a white Jeep Wrangler was just looking for the best place to ditch a load of trash.

She drove up to a row of dumpsters outside an auto-parts store in Coachella, California, and hopped out with a plastic bag. She looked inside one bin, but she moved on, tossing her bag at the next dumpster, which already overflowed with refuse.

It was a simple, seemingly innocuous act of disposal.

And that’s what, authorities say, makes it so chilling.

Because it wasn’t everyday detritus inside that bag; instead, it was full of puppies – seven of them, all just days old, said investigators with the Riverside County Department of Animal Services.

The incident, which happened Thursday, set off a mad dash for information on the woman driving the Jeep, and occasioned a countrywide outpouring of support for the puppies, terrier mixes that officials said were about 3 days old.

On Monday, authorities arrested Deborah Sue Culwell, a 54-year-old Coachella resident whom they had identified as a suspect earlier that day. She faces seven counts of felony animal cruelty.

The young dogs – which would still fit snugly in the palm of a human hand – survived, thanks to a passerby who found them. They’re now about a week old.

“We’re talking about seven pups tossed in the garbage like they were trash,” said John Welsh, a spokesman for the animal services agency, in an interview. “It’s a pretty serious case as far as animal cruelty goes.”

Typically, animal cruelty cases in the Southern California county don’t result in much jail time, but, he said, this may be an exception.

It’s the second case of puppy dumping in a month, reported The Desert Sun, noting a March incident in which animal services found two puppies in a trash bin at a recycling center in the same county.

But last week’s case was notable because authorities rarely find a suspect. The head of animal services, Chris Mayer, said he has already talked with the District Attorney’s Office about building a case.

“There is no excuse for dumping puppies,” Mayer said in a statement. “This was a shameful act.”

It was nearly a deadly one, too.

The plastic bag was sealed when the woman threw it away – plus, it was a blistering day in Coachella, the city that shares a name with a music festival in the desert nearby, with temperatures reaching the upper 90s that afternoon. The dogs were dehydrated and malnourished.

If a man, whom police identified only as “John,” hadn’t passed by soon after and heard the dogs’ cries, Welsh said, they could’ve died.

“He just happened to be in the right spot at the right time,” he said.

John was apparently rummaging through the trash when he found the bag and took it inside the auto shop, the animal services news release said. Veterinarians then treated the puppies and animal services transferred them to a local rescue group that is caring for them.

“The Good Samaritan played a major role in saving theses puppies’ lives,” Mayer said in the statement. “His actions were humane and heroic.” 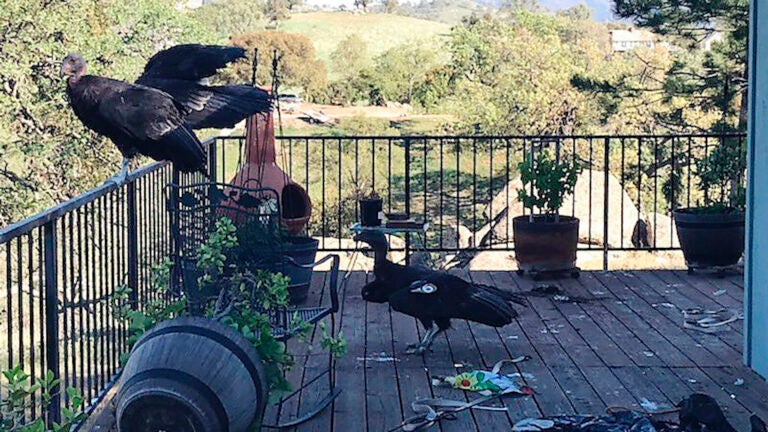 Only a few hundred California condors live in the wild, but about 20 teamed up to trash one woman’s deck