Amid the debate on the Alabama Senate floor over America’s most restrictive abortion law, state Sen. Linda Coleman-Madison, D, appeared to be losing patience.

She was one of just three women to vote Tuesday on HB 314, which would outlaw abortions even in cases of rape and incest. And more than two hours into the debate, she had a few questions for state Sen. Clyde Chambliss, R, one of the bill’s key Republican backers. Earlier, he had explained the law wouldn’t affect women until they “are known” to be pregnant.

What, exactly, did that mean? Coleman-Madison asked.

Coleman-Madison rested her chin in the palm of her hand, looking bored.

To Coleman-Madison, the moment crystallized a problem that has plagued women’s reproductive health debates over the years in Alabama’s legislature and beyond: They are typically dominated by male politicians. On Tuesday, that was in sharp focus. All 25 votes cast in favor of the bill were from white Republican men.

Coleman-Madison and Democratic state Sen. Vivian Davis Figures, the only women who spoke during the four-hour debate, acknowledged in interviews with The Washington Post that the divide on the issue is primarily one of ideology rather than gender; the Republican sponsor of the bill in the Alabama House, for example, is a woman, and Republican Gov. Kay Ivey is expected to sign it.

But both said the dearth of women’s voices in the Alabama legislature, particularly on an issue as intimate as pregnancy, has created a serious representation problem. While women comprise 51 percent of Alabama’s population, they make up just 15 percent of the legislature – among the worst gender ratios in the country, according to the National Conference of State Legislatures. Coleman-Madison compared Tuesday’s all-male yea vote to a “dentist making a decision about a heart surgery.”

“At the end, it’s the concept of strength in numbers,” said Coleman-Madison who, like Figures, personally opposes abortion but doesn’t believe in making the procedure illegal. “That’s why we need more women to run for office. These decisions are going to be made whether we like it or not, and more likely we’re not going to like it when decisions like this one, about a woman and her health, are being made by all the men.”

Tuesday marked the third time in the past month that a state legislature passed a restrictive abortion law, all of which have largely been seen as a vehicle for challenging Roe v. Wade in the newly balanced Supreme Court.

The Alabama abortion bill is the most harsh yet. It would allow abortion only if the mother’s health was in critical danger, banning it virtually at the moment of conception. It does not penalize women for abortions but could send doctors who perform them to prison for up to 99 years, more than rapists face in most cases. In Ohio, a law signed last month by Gov. Mike DeWine, R, outlaws abortion as early as a fetal heartbeat can be detected, before many women even know they’re pregnant (also without exception for rape or incest). And in Georgia, a new law signed last week by Gov. Brian Kemp, R, outlaws abortion after six weeks, again before many women know.

4. Republican leadership would do well to heed this warning: the women of this state will reclaim their rights after they have claimed your seats.#gapol pic.twitter.com/wItkLh00mj

In those states as well, men voting on the measures heavily outnumbered women. Male legislators in favor of such bills often argue that the issue of abortion is one of morality and that it is a topic both men and women should equally be allowed to debate.

But then, of course, come the questions like Coleman-Madison’s: “How many times have you actually carried a baby?” as Georgia state Rep. Kim Schofield, D, asked a male Republican lawmaker at one point.

Women on both sides of the aisle have long used their personal experiences with pregnancy to support or oppose restrictive abortion laws. For example, Iowa state Rep. Amy Sinclair, R, said hearing her son’s heartbeat on an ultrasound when she was pregnant at age 19 profoundly affected her concept of when life begins. By contrast, former Democratic state Rep. Wendy Davis of Texas and Georgia state Rep. Park Cannon, D, both used their experiences with abortions to oppose restrictive laws in 2013 and this year, respectively.

But in states where personal stories about abortion are not likely to sway the vote, female lawmakers who support abortion rights have sometimes filed protest bills or even made gynecology presentations to make a point.

In Texas in 2011, for example, state Rep. Sid Miller, R, proposed a bill requiring women to undergo ultrasounds 24 hours before getting an abortion to “make sure she knows what she is doing,” as Texas Monthly reported. But under questioning by a group of female lawmakers, Miller admitted he didn’t know whether at eight to 10 weeks a woman would need a traditional ultrasound or a more invasive transvaginal sonogram. (It was the latter.) State Rep. Carol Alvarado, D, whipped out a transvaginal probe to help provide Miller a visual.

“What would a woman undergo in your bill?” she asked.

“Actually, I have never had a sonogram done on me, so I’m not familiar with that exact procedure, on the medical procedure, how that proceeds,” Miller, now the state agriculture commissioner, sheepishly responded.

Figures took the same approach Tuesday afternoon, filing an amendment to the bill that would make it a felony for a man to have a vasectomy. It failed.

“It was just to prove a point,” she told The Washington Post. “Put yourself in our shoes. I tell them, there’s no law on the books anywhere in this country that mandate what a man can and can’t do with his body, yet for us there are a number of them. … They’re just so hellbent on doing what they want to do that they ignore all of that.”

On Tuesday night, numerous female lawmakers described the passage of the Alabama bill as an assault on women’s rights, and an unconstitutional attempt to revert to a time of DIY abortions.

“I’ve lived in that America,” Sen. Elizabeth Warren, D-Mass., wrote on Twitter, “and let me tell you: We are not going back – not now, not ever.”

“This is a war on women, and it is time to fight like hell,” said Sen. Kirsten Gillibrand, D-N.Y.

Figures said that after more than 20 years of being one of a few women in the state senate at any given time, she no longer feels exasperated by the lack of women – only because she got used to it. “It’s more disappointment,” she said. “You feel disappointed that you’re living in 2019 and you’re dealing this.”

But from the Alabama Senate floor Tuesday, Coleman-Madison offered a prediction.

“Now, we understand the women in this chamber are a minority,” she said, “but one of these days that’s going to change. And Sen. Figures’s amendment might just get passed.” 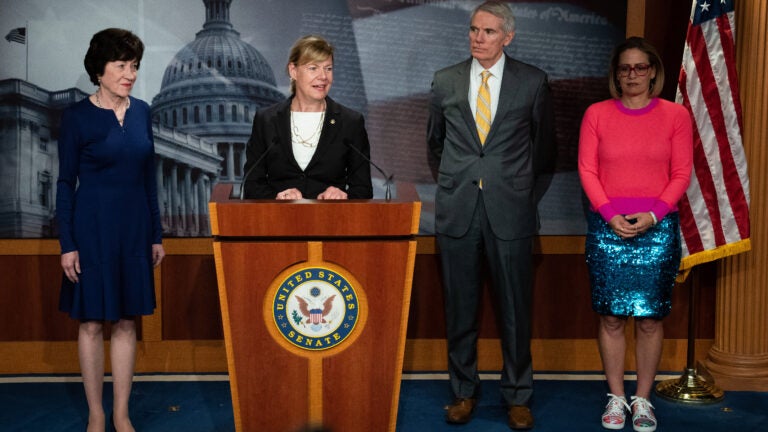