“In light of recent rallies, I would like you to enjoy tonight’s gathering, but I encourage you to please chant responsibly,” he said, staring into the camera with mock seriousness.

The advisory, Colbert clarified, stemmed from one event in particular — a rally President Donald Trump hosted in Greenville, North Carolina, on Wednesday night during which his supporters debuted a new chant.

For 13 seconds, the collective voices of thousands shouted “Send her back!,” directed at Rep. Ilhan Omar, D-Minn., a Somali-born refugee who became a U.S. citizen at the age of 17. The chant echoed widely condemned racist comments made by Trump earlier this week about Omar and three other minority congresswomen. On Thursday, the president attempted to distance himself from the words yelled at the rally and falsely insisted that he tried to quell the cries, telling reporters he “felt a little bit badly about it.”

“Sometimes I think this guy thinks cameras don’t exist,” Comedy Central host Trevor Noah said of Trump on Thursday night. “He didn’t stop anything. He was basking in that moment like an iguana soaking up racist sun.”

As the country grapples with Trump’s attacks against the four congresswomen, late-night hosts — all frequent critics of the president — have added their voices to the fray. On Thursday, their reactions to the rally chant and Trump’s defense ranged from disbelief to outrage.

“Wow,” Noah remarked after playing a video of the chant on his show.

“It almost makes you miss the innocent days when all Trump’s crowd wanted to do was imprison a woman without trial,” he said, referencing the “Lock her up!” chant that regularly targeted Hillary Clinton at Trump rallies in 2016. “That was horrible, but at least Hillary would get to stay in the country.”

Trump supporters chanting “send her back” about Ilhan Omar almost makes you miss the days when all they wanted was to imprison a woman without trial. pic.twitter.com/3JfI9kykeo

“This is one of the most vile spectacles in modern political history,” he said.

As the crowd shouted, the host pointed out that Trump “just stood by.” Footage of the moment showed the president appearing to take in the chant, turning his head left and right as he stood onstage behind a lectern bearing the presidential seal.

“That’s not how you stop a chant. That’s how you wait in line at the deli for them to call your number,” Meyers quipped before adopting a bored expression and slowly swiveling his head from side to side.

Noah joked that Trump “let that chant go on for so long Usain Bolt could have won a gold medal in that time.” The host then played a video of the Jamaican sprinter racing in the 100-meter dash alongside the rally clip.

“You see that?” Noah said. “Everyone crossed the line before Trump stopped the chant.”

Trump’s attempts to disavow his supporters’ actions also didn’t hold water with Colbert. The CBS host told his audience that the crowd at the event “did a bad thing,” only it was “exactly what [Trump] wanted.”

Colbert drew attention to Trump’s comments at the rally, highlighting the moment the president suggested the four minority lawmakers should leave the country. “If they don’t love it, tell them to leave it,” Trump said at one point.

“Let’s see if the crowd is able to pick up on that subtle messaging,” Colbert said.

Like Noah and Meyers, Colbert didn’t hesitate to point out the inconsistencies between Trump’s actions and his words.

“Wow, Trump supporters did you see him throw you under the bus?” Colbert said after playing video of the president telling reporters that he was “not happy with” the chant and disagreed with it. “Probably not since you have a tire on your face right now.”

Then Colbert called on Trump to “take responsibility for what [he] inspired.”

“You created that crowd,” he said. “You’re like Dr. Frankenstein saying, ‘I didn’t strangle those villagers. It was my monster. All I did was sew together some dead bodies, zap it with lightning, deny it love, set it loose and mention that I knew some people who could use a good strangling.'” 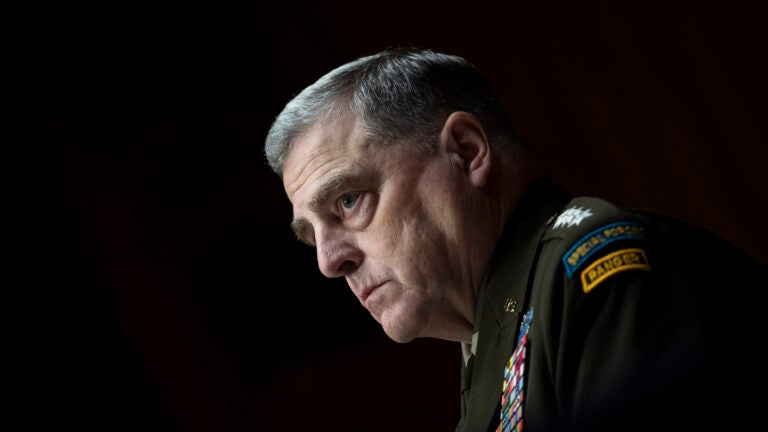