The last time Lisa Diemel heard from her husband, Nicholas, he told her that he and his brother Justin were heading out to a farm in northwest Missouri. It was the last day of their work trip and they had a meeting lined up to discuss a cattle business deal. Once that was over, they would be on a plane back home to Wisconsin.

Nicholas, 35, and Justin, 24, never made their flight on July 21. Numerous calls and texts to their phones went unanswered, and concerned family members quickly reported the men missing, according to WMTV in Madison, Wisconsin. Searches were launched across two counties in Missouri as authorities scrambled to track down the brothers.

“We hope we can get a good resolution to this,” Clinton County Sheriff Larry Fish told reporters in Missouri last week. “We really do.”

But what began as a missing persons case is now a “death investigation,” officials said. On Wednesday, Fish announced that human remains were found this week on a farm in Braymer, Missouri, where the men had gone the day they went missing – the latest major development in a case that has continued to present investigators with more questions than answers.

The human remains, which have not yet been identified, were discovered on farmland used by Braymer resident Garland “Joey” Nelson. The 25-year-old was arrested Friday after he admitted to driving the brothers’ rented truck without permission from the farm to a commuter lot more than 30 miles away and abandoning it there, police said. Investigators described Nelson as “a danger to the community” and noted that he “has tried to mislead law enforcement,” according to a probable cause affidavit obtained by the St. Joseph News-Press. Nelson faces a first-degree felony charge of tampering with a motor vehicle. Records did not indicate whether Nelson has a lawyer.

In 2015, Nelson pleaded guilty to running a three-part cattle fraud scheme that resulted in his victims losing more than $260,000. As part of the scheme, federal prosecutors said, Nelson sold nearly 650 cattle that belonged to other people. He was sentenced to two years in federal prison without parole.

During Wednesday’s brief news conference, Fish said the investigation is still active, noting that authorities are working with forensic doctors to “determine what took place.”

“Local, state, federal and out of state investigators are all working together to bring this case to a conclusion,” he said.

According to WMTV, the Diemel brothers traveled from Milwaukee to Kansas City, Missouri, on July 20. The siblings own a livestock company and spent the weekend traveling around two counties in Missouri meeting with farmers, the Green Bay Press-Gazette reported.

They were due back in Milwaukee around 3:15 p.m. on July 21, but they never arrived, according to the Press-Gazette. The next day, the brothers’ rental truck, a black 2019 Ford F-250, was found ditched in the commuter lot still running with lights on and keys in the ignition, investigators wrote in court records.

“I have no clue what’s going on,” their mother, Pam Diemel, told WGBA. “I can’t believe something like this could happen.”

Please call our TIPS Hotline at 816-632-8477 if you have any information regarding the whereabouts of these two individuals.

GPS data from the truck confirmed that Nicholas and Justin left their hotel shortly before 8:50 a.m. and drove roughly 30 minutes to the farm, the affidavit said. After about two hours, the truck left the farm, but surveillance footage showed that only one person was inside the vehicle. Police said the truck was later located where Nelson “admitted he left it.”

Meanwhile, authorities continued to scour places the brothers had visited during their trip, including the 74-acre tract of land used by Nelson.

“We are checking for buildings, ponds, waste piles,” Fish, the Clinton County sheriff, said at a July 25 news conference. “We’re just looking everywhere we can to try and see if we can’t find these brothers.”

But the hopes of finding the Diemels unharmed were swiftly dashed when just a day later, the search became a “death investigation,” the News-Press reported. On Monday, Fish told reporters that the discovery of the truck and “different leads” prompted them to reclassify the case.

While the identity of the remains and cause of death are still unclear, Lisa Diemel, Nicholas’s wife, petitioned a court in Wisconsin on Tuesday to be named special administrator of the brothers’ estates, the Kansas City Star reported. The petitions, which were supported by the brothers’ parents, note July 21 as the date of death, according to the Press-Gazette.

In an interview with WTMJ-TV shortly after the men disappeared, Lisa Diemel described her husband as “the backbone of this family.”

“Nick and I have four kids,” she said. “Our oldest two children understand the seriousness of this. The youngest two just miss their dad. They cry for him and ask where he is.” 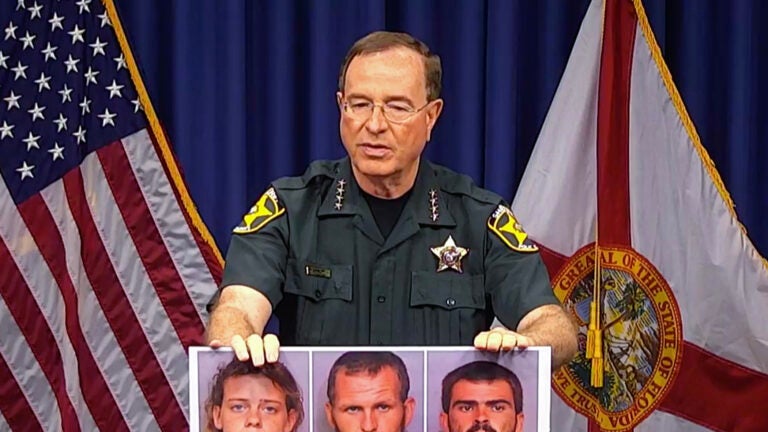 3 charged in ‘massacre’ of 3 friends during Florida fishing trip