At a fashion show in New York last weekend, a tall model walked down a narrow runway flanked by streetwear devotees. He wore white-and-gold sneakers, khaki pants and a dark gray sweatshirt with the hood up. Across his chest, the word “Columbine” jumped out in embroidered white letters surrounded by ripped holes.

He wasn’t alone. Three other models soon strutted the checkered floor, each wearing a hoodie tattered with bulletlike holes and embroidered with the names of the deadliest school shootings in U.S. history.

The co-founder of the fashion label later explained he wanted to “make a comment on gun violence . . . while also empowering the survivors of tragedy.” Instead, the show left victims and their families demanding the company shelve the line and apologize.

“This is just absolutely horrific,” the Vicki Soto Memorial Fund, managed by the family of a teacher who died in the Sandy Hook shooting, tweeted Monday. “A company is mak[ing] light of our pain and other’s pain for fashion.”

The shirts first drew widespread attention Sunday after the brand’s co-founder, Brick Owens, posted photos of the clothes on Instagram. By Tuesday afternoon, the posts had been inundated with criticism from gun violence survivors and victims’ families.

“Under what scenario could somebody think this was a good idea?” tweeted Fred Guttenberg, whose daughter died in the Stoneman Douglas shooting. “This has me so upset.”

Under what scenario could somebody think this was a good idea? This has me so upset. If any of my followers no anybody involved with this clothing line, please ask them to stop it immediately.https://t.co/VzAlog0TCt

The aunt of another student who died in the Douglas high school shooting in Parkland, Florida, told the company, “You should be ashamed of taking advantage of her death to make” money.

@bRicKOwens My 14 year old fashionista niece was murdered in Parkland. She was a professional illustrator and aspired to be clothing designer like you. You should be ashamed of taking advantage of her death to make ? Today, I proudly wear her designs. pic.twitter.com/j8DZ8waROe

Bstroy’s co-founders, Owens and Dieter Grams, met on Myspace as teens and started their label in Atlanta in 2012. They gravitated toward designs that run dark. The brand once staged a fashion show in a funeral home, saying its clothes were designed for a post-apocalyptic world. They make Nikes dipped in concrete, jackets with two hoods and a pair of $1,000 “double-edge” jeans that look like two pairs of pants sewn together at the waists and ankles.

The company once ran a tagline on its site reading, “Bstroy is protected by pointed violence, psychological warfare and Art. All opposition should be organized at the risk of those endangered,” according to the Internet Archive. The brand has sold T-shirts prominently featuring firearms, including preppy crew necks with fencing teams and archers armed with assault rifles instead of foils and bows.

“We are making violent statements,” Grams, who publicly goes by Du, told the New York Times in a feature last week. “That’s for you to know who we are, so we can have a voice in the market. But eventually that voice will say things that everyone can wear.”

Bstroy isn’t the first clothing company to catch heat for potentially profiting from school shootings. In 2014, Urban Outfitters was pilloried online for selling a faded Kent State University sweatshirt that appeared to be splattered with blood. Many observers thought the sweatshirt referenced the Ohio National Guard shooting and killing four students and injuring nine others there during a campus protest in 1970.

Bstroy did not immediately respond to a message late Tuesday, but on Instagram, the company suggested the clothing line, called Samsara, was meant to be ironic.

“Sometimes life can be painfully ironic,” reads a card that features an artist’s statement on the show. “Like the irony of dying violently in a place you considered to be a safe, controlled environment, like school. We are reminded all the time of life’s fragility, shortness, and unpredictability, yet we are also reminded of its infinite potential.”

Owens elaborated on his thinking in an email sent to the “Today” show.

“We wanted to make a comment on gun violence and the type of gun violence that needs preventative attention and what its origins are, while also empowering the survivors of tragedy through storytelling in the clothes,” the designer wrote.

He also suggested that the harsh response to the sweatshirts was rooted in prejudice, because both he and Grams are black men in their late 20s.

“Also built into the device is the fact that our image as young, black males has not been traditionally awarded credit for introducing avant-garde ideas,” Owens wrote. “So many people have assumed our message to be lazy just because of what they’ve been taught about black men. These hoodies were made with all of these intentions in mind, and to explore all of these societal issues.”

Although the company’s early statements indicated that the sweatshirts were created as an art piece for the show and weren’t meant to be sold, Bstroy now says it is considering putting them up for sale.

“The hoodies have only been shown not sold and the school shooting hoodies were initially intended to be just for the show and not to sell but that may change now,” the company told the Cut.

Critics suggested that making money off the line would be an insult to survivors. 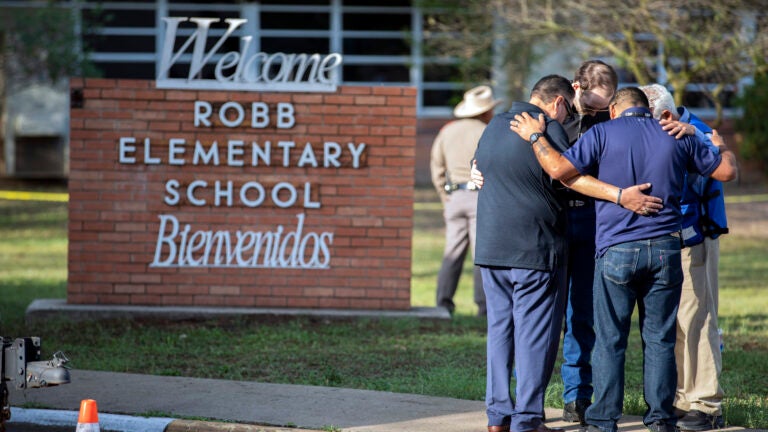