Before her homecoming dance, Darcy Krueger had done the near impossible: Figuring out a semiformal look that was comfortable, stylish and didn’t violate the event’s ban on plunging backs and low-cut dresses. After leaving a store empty-handed, the high school senior settled on a dressy black jumpsuit from her own closet, pairing it with strappy heels, a statement necklace and an elaborate hairstyle.

But when the 17-year-old showed up at the private dance for hundreds of home-schooled students in the Tampa area on Sept. 27, she was turned away at the door. The event’s organizer pointed to the dress code, which stated that young women were required to wear dresses.

“I thought there had to be a misunderstanding,” Darcy’s mother, Melissa Krueger, told Yahoo on Friday. “What century are we in!?”

Her confusion was understandable. Jumpsuits have exploded in popularity in recent years, becoming practically ubiquitous at weddings and other formal occasions. Once associated with the 1970s, the flattering one-piece garments are now a staple of the Oscars red carpet, and white jumpsuits have become a trendy alternative to bridal gowns. And while women have been dressing up in pantsuits and so-called “menswear” for decades, many of today’s teenagers are rejecting traditional gender norms altogether. Last month, Brandon Allen, a gay high school senior in Memphis, accepted the gender-neutral title of “Homecoming Royalty” in a floor-length gown, telling the Commercial Appeal, “I decided to wear a dress because I strongly believe in the fact that I’m a queen.”

Though Darcy received a refund on her $50 homecoming ticket, she and her mother were angered to learn that she wouldn’t be allowed to attend the dance unless she went home and changed first.

“The bigger question is, why can’t a girl wear something other than a dress?” Darcy’s mother told CNN. “This isn’t ‘Little House on the Prairie.'”

Denied entrance to to her Senior Homecoming dance.

Neither had predicted that the 17-year-old’s fashionable wide-legged jumpsuit would be an issue. The dress code for the Tampa Bay Homeschool Homecoming Dance specified that young women were expected to wear semiformal dresses, but the rules seemed mostly intended to ensure that teenagers dressed modestly.

“Please plan your attire within a conservative manner,” a since-deleted Facebook post read. “We do allow strapless and knee length short dresses, as well as 2 piece dresses with less than 2′ gap at midsection. We highly discourage dresses that are too revealing and that are simply too short. Dresses that expose a plunging neckline or backlines are NOT appropriate.”

The guidelines also noted that jeans, T-shirts and baseball caps weren’t allowed, but since Darcy’s dressy jumpsuit would have fit right in at a wedding or any other formal event, neither she nor her mother thought twice about it. “It didn’t cross my mind her outfit would be in violation,” Krueger told NBC’s “Today” show.

From certain angles, Darcy’s flowy bodysuit could have easily been mistaken for an ankle-length dress. But the teenager told “Today” that while she was waiting in line, the event planner, Stephanie Voth, caught a glimpse of her pant legs.

“The moment she saw my legs move, she immediately denied me entrance,” Darcy said. “It felt very dismissive and inconsiderate.”

In an emailed statement to WFTS, Voth defended the policy.

“We have 2 private events every year for our students,” she wrote. “These events have a dress code. This particular event 390 students bought tickets. Only 1 student had to be turned away and it was due to dress code. We offered her an opportunity to come back if she could change into the dress code. We would have loved to had 100% attendance. However, her ticket was refunded after the event and we confirmed that she did not return.”

Darcy told “Today” that she wasn’t willing to go home and change just so she could attend the event.

“That was not an option for me once I realized the only reason I couldn’t go in was because I wasn’t wearing an actual dress,” she said. “I just couldn’t support that idea. My initial reaction was to call my mom since she had dropped me off there to just come and pick me up and go home. I didn’t want to be there anymore.”

Up until that point, the 17-year-old had been excited for the dance, which was supposed to be an opportunity for home-schooled students to experience a traditional homecoming. But she went home upset instead. “Feeling awful,” her mother wrote on Facebook. “#seniorhocoruined.”

By early Monday morning, nearly 500 people had commented on the post, complimenting Darcy’s “stunning,” “amazing” and “classy” jumpsuit. A local photographer, Jennie Ellis, volunteered to do a free photo shoot with the 17-year-old. Others questioned whether the rule was intended to discourage LGBTQ teenagers from attending the dance.

“If you open the door to a girl wearing a pantsuit . . . oh lordy lordy!!” wrote one commenter. “Next thing you know there’ll be a girl in a tuxedo.”

Voth, who could not be reached for comment late Sunday night, told “Today” that the dress code was “submitted and approved by the parents of our community group,” and her role was simply to enforce and execute it.

“The dress code issue was a pantsuit does not qualify as a dress,” she wrote in an emailed statement.

Krueger told Yahoo that her daughter, who has been home-schooled for most of her academic career, has attended multiple events organized by the same group before, but now isn’t sure if she wants to go to her senior prom.

“As of now, Darcy does not plan on attending future events,” she said. “If she is given a sincere apology and the rules are changed to clearly state that girls can wear dressy jumpsuits and pant attire, then she might consider it.” 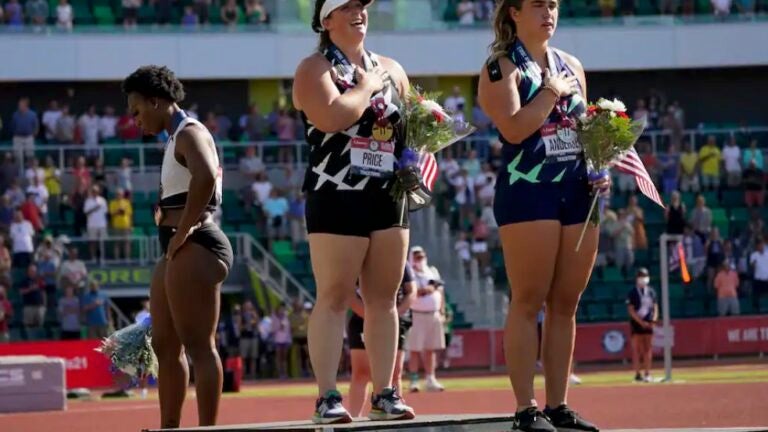 Gwen Berry turns away from flag at U.S. track and field trials: 'I feel like it was a setup'