If the image of House Speaker Nancy Pelosi’s White House meeting with President Donald Trump had been a painting, some say it could have been a masterpiece. Something about the symmetry, the light, and the postures of the figures in the room turned ordinary people into art historians who were captivated by the strength of the composition.

“The juxtaposition of the direction the participants are leaning on opposite sides of the table is a strong dynamic,” rhapsodized one commenter on the Reddit forum called Accidental Renaissance.

“It’s the detail on all the faces that make it. Like the Last Supper,” wrote another.

The Redditors had titled the image “The Meeting,” which sounded both poetic and politically neutral. Of course, Trump titled it “Nervous Nancy’s unhinged meltdown” when he tweeted the image on Wednesday, but Pelosi obviously saw something quite different, since she made it the cover image on her own Twitter account.

Whatever it should be called, the photo seemed to be instantly iconic, especially for supporters of Pelosi, whose defiant posture came across as powerfully symbolic – a woman literally stands up to the president. Trump did not credit the artist in his tweet, but she was later identified as White House photographer Shealah Craighead.

“It shows the ambiguity and the double meaning that a photograph can have,” said Lisa Lipinski, an art history professor at the George Washington University.

But she wouldn’t necessarily classify it as Renaissance. “Rather than saying a Renaissance painting, it’s a classical composition,” she said. “It does look back to Roman painting.”

There are familiar elements in the image. One is Pelosi’s stance, evocative of imagery found throughout art history. Standing with her right arm outstretched and her finger pointed, it’s an example of the adlocutio pose, which artists often portray heroes and leaders. Think of the famous sculptures and paintings of Augustus Ceasar, Napoleon and George Washington. Pelosi’s detractors can rightfully argue that the same pose has been used to elevate controversial leaders in propaganda – you’ll find it in images of Chairman Mao and Kim Il-Sung.

The painting on the wall at the far side of the room, Charles Édouard Armand-Dumaresq’s “The Signing of the Declaration of Independence,” provides an eerie parallel, with several of the founding fathers depicted in the same position as Pelosi. And the figures leaning in on both side give the painting an intensity, with the perfect rows of white-haired men are reminiscent of early American political paintings. A bust of Benjamin Franklin looks on from the right corner.

“It’s all very stately. There’s a decorum to the image,” said Lipinski. “And that the classical setting is a reference to democracy and the republic and all of the iconography that’s part of our visual environment in the architectuire of Washington, D.C.”

The balance of the composition, too, is what makes it rather painterly. The image is almost symmetrical – you could draw a straight line down the middle that would divide the double-faced clock. In Renaissance architecture, symmetry signified the triumph of intellect and the perfection of god’s creation.

“Symmetry signifies rest and binding, asymmetry motion and loosening, the one order and law, the other arbitrariness and accident,” wrote the Austrian art historian Dagobert Frey, who – it should be noted – helped the Nazis loot the art museums in Poland.

Symmetry also has a stillness to it, which may be contributing to the interpretation of this photo.

“This is a rather quiet image on the surface, said Lipinski, “which may be why people are saying it’s like a painting.”

It’s also an image with gravitas. Al Acres, chair of the Georgetown University department of art and art history, said the painting’s setting and context make it a clear example of the genre of history painting, which aims to capture definitive moments.

“History painting had long been regarded as the highest aspiration of painting,” said Acres. “This is a picture that screams that there is a story in play. It’s very clear that this is not just a moment of daily life that’s been captured. This announces itself.”

When we say that photographs look like paintings, it can be a reflection of their composition – but what we’re actually doing is ascribing them permanence. Like “Washington Crossing the Delaware” or the court paintings of European kings, a painting shapes the memory of political leaders for future generations. “The Meeting” – if we want to call it that – will endure because it encapsulates the conflicts of Trump’s presidency into a single image.

“The Renaissance, it was really about intellect rather than emotion,” said Lipinski. Which, when you think about how Trump alleging Pelosi’s “meltdown” turned into a story of his own temper, “is rather ironic.” 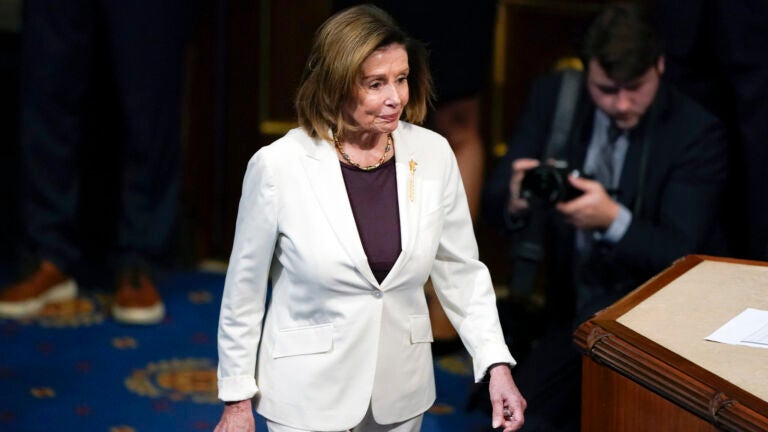