The name, World War Zero, is supposed to evoke both the national security threat posed by the earth’s warming and the type of wartime mobilization that Kerry argued would be needed to stop the rise in carbon emissions before 2050. The star-studded group is supposed to win over those skeptical of the policies that would be needed to accomplish that.

Former presidents Bill Clinton and Jimmy Carter are part of the effort. Moderate Republican lawmakers like Arnold Schwarzenegger, the former governor of California, and John Kasich, the former governor of Ohio, are on the list. Stars like Leonardo DiCaprio, Sting and Ashton Kutcher round out the roster of more than 60 founding members. Their goal is to hold more than 10 million “climate conversations” in the coming year with Americans across the political spectrum.

With a starting budget of $500,000, Kerry said, he and other coalition members intend to hold town meetings across the country starting in January. Members will head to battleground states key to the 2020 election, but also to military bases where climate discussions are rare and to economically depressed areas that members say could benefit from clean energy jobs.

“We’re going to try to reach millions of people, Americans and people in other parts of the world, in order to mobilize an army of people who are going to demand action now on climate change sufficient to meet the challenge,” Kerry said in an interview.

The launch of the new group on Sunday comes as diplomats gather in Madrid on Monday for global climate negotiations aimed at strengthening the 2015 Paris Agreement, from which President Donald Trump has vowed to withdraw next year. Earlier this week the United Nations found that the world’s richest countries, responsible for emitting more than three-fourths of planet-warming pollution, are not doing enough to keep Earth’s temperature from rising to dangerously high levels. Net carbon emissions from the two largest polluters, the United States and China, are expanding.

Sarah Matthews, a spokeswoman for Trump’s reelection campaign, said in a statement that the administration “continues to advance realistic solutions to reduce emissions while unleashing American energy like never before.” Asked to comment on the new bipartisan group, she also criticized efforts to force the United States to cut emissions, arguing “the largest emitters like China and India won’t do the same.”

Schwarzenegger in an interview this week dismissed as “bogus” the Trump administration’s argument that China must do more to curb emissions before the United States acts.

“I always say to myself, what is happening here? America never ever in its history has said, ‘Let some other country do something first.’ We should lead,” he said.

Kerry said while individual members might personally promote specific climate policy proposals, like a tax on carbon dioxide pollution, or the Green New Deal, the coalition is not aimed at promoting any particular plan.

“We’re not going to be divided going down a rabbit hole for one plan or another,” he said.

The Green New Deal envisions addressing climate change and income inequality in tandem, with a federal job guarantee and federal mandates like ensuring the country’s power and electricity systems run entirely on renewable energy by 2030. The Sunrise Movement, a climate activist group that promotes the Green New Deal, has been critical of global warming efforts that do not embrace that vision, but its leaders held their fire on Kerry’s group.

Some members of Kerry’s coalition hold positions that many in the environmental movement oppose, like support for natural gas as a transition fuel from coal.

Combustion of natural gas emits about half as much carbon dioxide as coal and 30% less than oil, and its expansion is widely credited for helping the United States curb emissions in the past decade. It also produces methane, a fast-acting greenhouse gas with enormous short-term impacts on the climate.

U.N. scientists have said the world needs to cut carbon emissions in half by 2030, and must eliminate them by 2050 to limit warming to relatively safe levels. To do that, the United States would need to phase out all fossil fuels, including gas, as rapidly as possible.

Kasich said in an interview that he believed in finding a consensus among Americans to tackle climate change, and saw a solution in both putting a price on carbon and increasing the research, development and deployment of renewable energy. He also said natural gas would continue to play a part, especially gas produced by hydraulic fracturing, or “fracking,” which has brought jobs to his state.

“If I’ve got to sign up to be an anti-fracker, count me out,” Kasich said.

Katie Eder, founder of The Future Coalition, a network for youth-led organizations that helped organize climate strikes around the country in September, supports the Green New Deal and is a member of Kerry’s coalition. She said people who cared about climate change needed to look past their differences.

“While I may be disagreeing with some of the things that other folks involved in World War Zero believe, that doesn’t mean we can’t work together,” she said. “Collaboration is our key to survival.” 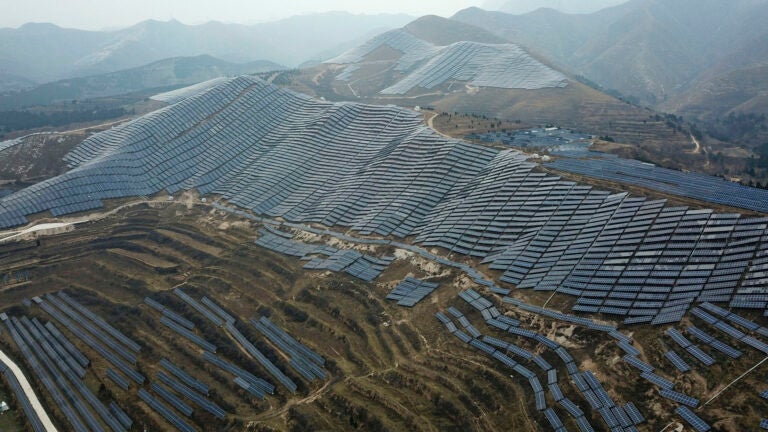 China’s climate paradox: A leader in coal and clean energy