CONCORD, N.H. – Democrats braced themselves Tuesday night for a long and divisive contest for their party’s presidential nomination after New Hampshire voters added new uncertainty to a race already scrambled by last week’s caucuses in Iowa.

Sen. Bernie Sanders, I-Vt., who won Tuesday night, has staked his claim as the favored candidate of the party’s liberal wing and a threat to win the nomination. But his performance in New Hampshire was hardly overwhelming and far short of what he accomplished here four years ago.

Yet if Sanders is the candidate of the liberal wing, those who are more moderate are still divided in their choice. The existence of that competition, and questions about each of the candidates seeking to become the alternative to Sanders, heightened the discontent about where this race might be heading.

The likely prospect now is that Sanders and several other candidates will divide the vote and delegates the rest of this month and into March, when more than 60 percent of the pledged delegates will be chosen. With support among the center-left candidates divided, Sanders could emerge from Super Tuesday with a lead in delegates. He would then be in a position to do what few Democrats thought possible before the campaign started, which is win the nomination — but not without a major fight.

A week ago, Iowa Democrats shook up the race by giving former South Bend, Indiana, mayor Pete Buttigieg the narrowest of victories in the contest for so-called state delegate equivalents. That propelled the 38-year-old into the top ranks of the field, and he continued his once-improbable march as he was giving Sanders a serious challenge in the Granite State.

Buttigieg will use those results to claim the race is now a two-person contest. But New Hampshire voters produced a plot twist that was wholly unforeseen two weeks ago, lifting Sen. Amy Klobuchar of Minnesota, who ran fifth in Iowa, into the competition here with Sanders and Buttigieg. After being written off, Klobuchar has suddenly made herself a factor in the race, though she is still someone with major question marks about her candidacy and what comes next.

Democrats got to this position in large part because of the collapse of former vice president Joe Biden. Weeks ago, he was intending to fill the role of Sanders’ principal rival. But the voters in Iowa and New Hampshire rejected Biden in such numbers that, for now, he has been relegated to also-ran status, his candidacy in a perilous state from which it will be difficult to recover.

All of this could be good news for Mike Bloomberg, the former New York mayor, who has chosen to skip the first four contests and begin his campaign in the states that vote March 3.

But it is good news for Bloomberg only if he can quickly make himself the principal alternative to Sanders. With Buttigieg and now possibly Klobuchar in the mix, that won’t be easy.

Bloomberg has resources that Buttigieg and Klobuchar can only dream of having. But as a onetime Republican, he is not a natural fit in the Democratic Party. As a multibillionaire in a party that includes many voters who decry the influence of big money in politics, he will be accused of trying to buy the nomination.

Sanders has already taken aim at him, but the resentment against his candidacy is not limited to those who back Sanders, if private conversations with a number of Democrats on Tuesday are any indication.

A year ago, Democrats were celebrating their victories in the 2018 midterms. Today they are deeply worried about 2020. President Donald Trump is seizing on every benefit incumbency offers and adding to his advantage with an enormous war chest and a skilled reelection operation. The Trump team is on offense like no other campaign in recent memory, savoring what it sees as disarray among Democrats.

Fears among Democrats of a Trump victory in November have grown in the wake of his acquittal in the impeachment trial in the Senate, leaving many demoralized and many voters in New Hampshire uncertain where to turn.

Half the electorate there made a decision in the last few days, according to the network exit poll conducted by Edison Research. The desire to find the one candidate who could assure victory in the fall and the fear of getting that decision wrong left many voters here in near-paralysis until primary day arrived.

Beyond Biden, the New Hampshire results were also bad news for Sen. Elizabeth Warren of Massachusetts, who had expected to be in a duel for supremacy with Sanders here. This state has often treated candidates from neighboring states well, but that wasn’t the case Tuesday for Warren. Nonetheless, the unpredictability of the Democratic contest provides little incentive to others who have run poorly to quit the race before Super Tuesday.

Nevada and South Carolina, the next two states on the calendar, offer a dramatically different demographic mix than Iowa and New Hampshire, with Latinos and African-Americans now coming to the fore. The demographics of those states will test Buttigieg and Klobuchar, neither of which has yet shown an ability to attract the support of minority voters.

Biden, who has bet his candidacy on his support from African-Americans and to some extent Latinos, made clear Tuesday night that he hopes for a better finish next week in Nevada, which then could boost his chances in South Carolina. Whether after two dismal finishes he can do that is questionable. Warren, after a disappointing third in Iowa and a weak result in New Hampshire, has, like Biden, put herself in a deep hole with no obvious comeback opportunities.

Many strategists in the party anticipated a muddled campaign that would drag into the spring, but no one expected that it would look quite like this. The nightmare scenario for Democrats is what comes after the early states, if the delegates are divided among several candidates.

The Democrats face a version of what Republicans went through in 2016. Trump benefited because no single rival could consolidate the anti-Trump vote. Democratic rules are different. Delegates are allocated proportionally. That makes it difficult to gain a big lead, but even a small one can become an insurmountable obstacle to those trailing.

As the votes were being counted Tuesday, some Democrats were already talking about the possibility that the nomination contest could go all the way to the party convention in Milwaukee, at which time the choice could be whether to ratify the plurality leader in delegates or hand it to someone else. Either choice could rupture the party.

One strategist who fears the impact on the party of a Sanders nomination said the only hope of stopping him might be for Democrats to rally around Bloomberg.

“I think we’re getting to the point where either we all consolidate behind Mike Bloomberg or Bernie Sanders becomes our nominee,” said the strategist, who asked not to be identified to share his assessment of the race.

As things stand now, it’s hardly clear how that scenario could be engineered.

The various scenarios sketched out by Democrats on Tuesday night left another veteran of Democratic presidential campaigns deeply pessimistic.

“We are facing such an awful president and the worst, scariest person we ever faced, and we had the best field we ever had and look at where we are,” this strategist said. “Shame on us.” 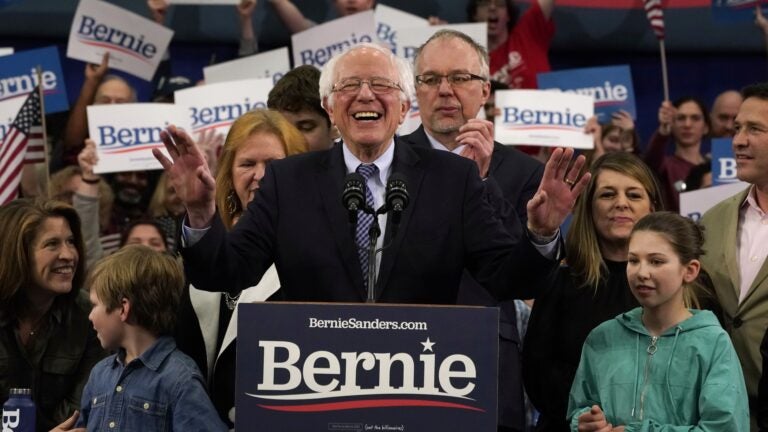