Voters in the first-in-the-nation primary in New Hampshire weighed in on the presidential race Tuesday, and unlike in Iowa last week, we actually got results.

Bernie Sanders: After winning the most votes but having Pete Buttigieg pull out a delegate win in Iowa, Sanders was the first clear and unmistakable winner of a state in the nominating process. It might not be a big surprise given he won the state by 22.4 points in 2016 and is a senator from Vermont, a neighboring state, but it’s a win. And it cements him as one of two front-runners in this race — if he’s not even a slim favorite at this very early juncture.

Making things better for Sanders is how the rest of the field shook out. Buttigieg seemed to cede some support to Amy Klobuchar after Friday’s debate, but they finished second and third, respectively, while the other neighboring-state senator, Massachusetts’s Elizabeth Warren, finished well behind. To the extent this race focuses on the top three finishers in New Hampshire moving forward, Sanders won’t have to deal with his ideological competitor in Warren, while Buttigieg and Klobuchar fight it out for more middle-of-the-road voters. (He might even benefit from Andrew Yang dropping out Tuesday night, given that he could be a logical ideological landing spot for them and that Yang’s supporters are so enthusiastic.)

Amy Klobuchar: Perhaps the biggest question heading into Tuesday was not who would win, but who would finish third: Joe Biden, Warren or Klobuchar? But the Minnesota senator arguably needed it more than the others, and she got it — by a wide margin. She turned a strong debate performance Friday into legitimate and instant momentum, with polls this weekend showing her rising into the low teens. She did even better than that.

Iowa was a disappointment for her. She finished fifth there, despite being from a neighboring state. New Hampshire should at least give her a platform in this race in the weeks ahead, which isn’t a complete given for the candidates who failed to nab a top-three spot.

Pete Buttigieg: His loss of ground to Klobuchar in the final days shouldn’t obscure the improbability of what he just accomplished — a delegate win in Iowa and a close second-place finish in New Hampshire (Buttigieg trailed Sanders by less than two points when the race was called). Not bad for the young mayor of a relatively small city in Indiana. Buttigieg seemed to have a shot at winning New Hampshire as the Iowa results trickled in last week, but losing narrowly to a guy who won the state by a big margin last time is hardly a failure. In fact, it was a strong night for Buttigieg. Next though, he’s got to contend with the newly relevant Klobuchar — and his shortcomings with minority voters.

Primaries: Hey, guess what: They run more smoothly! This will come off as gratuitous after the beating Iowa has taken over the past week for its caucus debacle, and it’s not like we didn’t expect New Hampshire to handle its vote-counting business. But Tuesday was a reminder of how much simpler it can all be when you just let people vote and then count those votes.

A brokered convention: Five big-name candidates plan to press forward after New Hampshire (regardless of their chances). And starting Super Tuesday on March 3, Mike Bloomberg’s name will be on the ballot, and he could also carry significant delegates. It seems every four years we talk about a potential brokered convention, but this year it’s as likely as ever. A candidate needs a majority of delegates heading into Milwaukee this summer, and it’s worth keeping an eye on that count, starting now.

Joe Biden: No surprise here, but it’s worth registering just what a disappointment the results were for Biden. After a fourth-place finish in Iowa last week, he’s in the single digits in New Hampshire – an unquestionably troubling start for the man who looked like the leading candidate for much of the race.

Biden tried to downplay his impeding doom in the Granite State by ditching it on primary night and flying off to South Carolina. He’s trying to project that he’s in the race for the long haul. But this is a guy who two weeks ago polled in the 20s in New Hampshire falling way back. The question now is whether a candidate who never raised money like the front-runner can make it to the first Southern primary in 18 days — and whether he will be a viable choice by that time. (Even if he wins in South Carolina, he’ll only have three days before Super Tuesday to capitalize — not much time to raise and spend money.) The calendar has worked against Biden, in some respects, because there aren’t many black voters in Iowa and New Hampshire. But there is a difference between finishing second or third in those states and not even placing. As troublingly for him, he’s even losing his lock on the black vote, with a national poll this week showing him in a virtual tie with Bloomberg. Not good, all around.

“It ain’t over, man,” Biden maintained in South Carolina on Tuesday night. “We’re just getting started.” We shall see.

Elizabeth Warren: As a neighboring-state senator who once polled in the lead in New Hampshire, fourth or fifth place just isn’t good. There is arguably even less of a path forward for her than for Biden, given she was already falling behind the pace nationally, in Nevada and in South Carolina as of last month. Unlike Biden, it’s not clear where she might plausibly find a victory.

Democrats’ diversity: This race once featured five candidates on the debate stage from racially diverse backgrounds. It won’t have any moving forward. Andrew Yang dropped out of the race on Tuesday night, shortly after polls closed, joining Cory Booker, Kamala Harris and Julián Castro on the sidelines. Rep. Tulsi Gabbard, D-Hawaii, meanwhile, is still in the race, but showed no pulse Tuesday in a state where she invested heavily. Former Massachusetts governor Deval Patrick got a late start and is still a candidate, but he has yet to register a blip in the race or give us any reason to think he will. Minority voters will start mattering big time in this race starting in Nevada; minority candidates will be all but absent.

Moving to the state: Speaking of Gabbard, she became the latest in a long line of candidates to literally move to an early state in hopes of making it their calling card and failing. She campaigned in New Hampshire on more than 100 days over the last year and got 3% to show for it. Making matters worse, it should have been a good state for her, given its libertarian streak, open primary and lack of a real GOP contest. That meant the Fox News favorite could have ostensibly drawn some crossover voters, but whatever strategy she had clearly didn’t work there.

The other billionaire: Even as Bloomberg has shown real momentum, the other billionaire in this race has basically been lighting his money on fire. Tom Steyer has spent nearly as much as Bloomberg — almost $200 million — and he’s been in the low single digits in both Iowa and New Hampshire. President Donald Trump wasn’t exactly wrong in this tweet:

“Impeachment King Steyer (how did that work out?) spent 200 Million Dollars and got less than 1% of the vote in Iowa, and only 3% of the Vote in New Hampshire. Could it be that something is just plain missing? Not easy to do what I did, is it?,” Trump tweeted.

Michael Bennet: Michael Bennet, we hardly knew ye. It’s tough to think back to a sitting senator who made less of a showing in a campaign and yet actually stuck around for the votes. The Coloradan registered four votes in the final count in Iowa — not a typo — and was well below 1% in New Hampshire. The one recent comparison that comes to mind is Biden in 2008, but at least he got 1 percent in Iowa and took the hint by dropping out. 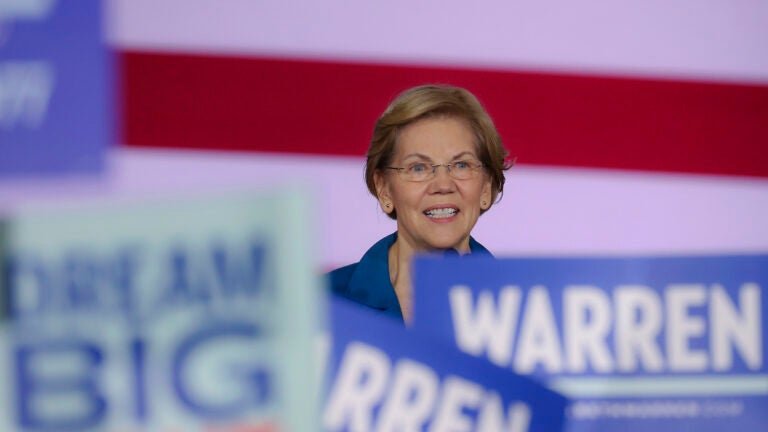