President Donald Trump spoke positively about the work of an extremist conspiracy-theory group, expressed skepticism about mask-wearing, rebuked his own FBI director, and attacked the legitimacy of the 2020 election in a televised town hall forum Thursday, forgoing a focused campaign appeal. Instead, he further stoked the country’s political rifts as his Democratic opponent, Joe Biden, pushed a deliberate overture anchored in concerns over public health.

Trump’s defensive performance came on a night that was supposed to feature a debate between him and Biden, but that morphed into a long-distance study in contrasts on different television networks after the president declined to participate in a virtual debate.

On the central issue of the election, the coronavirus pandemic, the two candidates appeared to inhabit not just different television sets but different universes. Biden has made the full embrace of strict public health guidelines the centerpiece of his candidacy, while Trump has continued to defy even the recommendations of his own government on matters as basic as the use of masks — a pattern that persisted in their opposing events Thursday.

In perhaps his most incendiary remarks, Trump repeatedly declined to disavow QAnon, a pro-Trump internet community that has been described by law enforcement as a potential domestic terrorism threat. The president professed to have no knowledge of the group, and as a result could not disavow it, but then demonstrated specific knowledge of one of its core conspiracy theories involving pedophilia that is entirely false.

“I know nothing about it,” Trump said. “I do know they are very much against pedophilia. They fight it very hard.”

When NBC anchor Savannah Guthrie pressed Trump to reject the community’s essential worldview, and described some of its most extreme and bogus elements, the president gave no ground: “I don’t know,” he insisted. “No, I don’t know.”

At the moment that Trump was effectively defending a fringe corner of the internet, Biden, the former vice president, was speaking about corporate tax rates and citing the business-analysis service Moody’s, underscoring the extraordinary gulf separating the two candidates in their worldviews, policies and connections to factual reality.

“It’s about growing the economy,” Biden said, a political platitude that would fit in any ordinary election year — and an illustration, in some ways, of Biden’s central campaign promise: to restore stability and a measure of predictability to the White House.

With less than three weeks left in the presidential campaign, there was no sign from the town hall events that either candidate was diverging from the political tracks they laid down months ago, with Biden hewing close to a set of broadly popular views on economic and public health issues and Trump improvising freely, admitting no fault in his own record and hurling various forms of incendiary provocation.

Indeed, their opposing presentations gave the impression that, had the two men been onstage together Thursday evening, it might have unfolded much like their previous debate, which saw Trump hectoring and interrupting Biden for most of an hour and a half.

Biden, seated in a chair at the National Constitution Center in Philadelphia, sought to connect with the voters sprinkled throughout a mostly empty auditorium by making constant references to his plans to confront the major challenges facing the nation, including the coronavirus, school and business reopenings. He concluded many of his lengthy responses by expressing hope that he had answered the voters’ questions.

Trump, by contrast, repeatedly flashed impatience with Guthrie’s persistent questioning, sounding especially exasperated when she asked him to condemn white supremacy (“I denounce white supremacy, OK?” he replied.) When Guthrie asked him repeatedly for specific information about his recent medical problems, the president largely resorted to generalities and declined to say if he had taken a coronavirus test on the day of his first debate with Biden.

Asked about a recent New York Times investigation that revealed he had paid minimal or no income taxes for years, Trump attacked the reporting and claimed falsely that it was “illegal.” He denied owing any money to Russians and briefly appeared to promise Guthrie he would “let you know who I owe” money to, but his verbiage was not entirely clear, and at one point he delivered a kind of miniature filibuster by listing various properties he owns.

In his appearance, Biden also confronted a number of issues that have been challenging for him to address throughout the campaign, including his views on expanding the Supreme Court and his record on the 1994 crime bill. Under questioning he appeared to say that he would clarify his position on expanding the Supreme Court before Election Day. And he also seemed to briefly acknowledge that it was a mistake to support the crime bill, a measure in which he played a central role, though he went on to immediately suggest the perceived problem came in how the states implemented it.

“Yes it was,” he said, when asked if it was a mistake to support it. “But here’s where the mistake came: The mistake came in terms of what the states did locally.”

There was virtually no overlap in how Trump and Biden addressed the subject of the coronavirus.

Biden, for his part, lashed virtually every aspect of the president’s handling of the health crisis, including his language on masks.

“The words of a president matter,” Biden said. “When a president doesn’t wear a mask or makes fun of folks like me when I was wearing a mask for a long time, then, you know, people say, ‘Well, it mustn’t be that important.’”

The former vice president noted his own consultations with medical experts and emphasized his deference to scientific judgment on confronting the virus and trusting a potential vaccine, while jabbing some of Trump’s more outlandish commentary on the virus, such as his suggestion that ingesting disinfectant could help with the virus.

“Crazy stuff,” Biden said. “I’m not being facetious, though, I mean he actually said these things.”

Even as the disease continues to tear through the country, Trump insisted that the United States was “rounding the corner” in its bout with the pandemic and urged people to “use the word cure” in reference to emerging therapies to treat the virus, even though no treatment has emerged that meets that description.

The president again criticized state leaders for ordering lockdowns and singled out Gov. Gretchen Whitmer of Michigan, who was recently the target of a kidnapping plot by anti-government militants, for personal attack. And despite briefly expressing support for mask-wearing, Trump quickly equivocated.

“On the masks, you have two stories,” Trump said, claiming falsely that most people who wear masks contract the virus.

Perhaps notably, Trump said he would commit to a peaceful transfer of power after the election — a promise he declined to make in the first debate — though he quickly added the qualification that he would insist on an “honest election” and raised unsubstantiated theories about voter fraud. When Guthrie pointed out that FBI Director Christopher Wray had said there was no sign of such widespread voter misconduct, the president shot back, “Then he’s not doing a very good job.”

The unusual split-screen spectacle came about, like so much else in the 2020 campaign, as a result of the coronavirus pandemic and Trump’s resistance to following the public health guidelines outlined by scientists and medical experts in his own administration. After the president tested positive for the coronavirus this month, the Commission on Presidential Debates announced that the second scheduled encounter between Trump and Biden would take place virtually, for safety reasons. Trump refused to participate in such an event, leading to its cancellation.

But the president appeared to have second thoughts about scrapping one of only a few remaining opportunities to present a side-by-side contrast with a challenger who is well ahead in the polls. Trump and his campaign demanded that the commission revive the debate, as an in-person event, and when that plea yielded no results the president scheduled a town hall forum with NBC to compete with one Biden had already arranged on a different network.

Biden had less to lose from a relatively muted evening, since he is consistently ahead of Trump in national and swing-state polls while millions of Americans are already casting their ballots through early and mail-in balloting.

The dueling town hall events came amid Trump’s first week back on the campaign trail after his three-night hospitalization in early October and his recovery the next week. The president has been determined to return to campaigning as usual despite the apparent severity of the health issues he confronted, aware that time is running short and perhaps eager to dispel any perception among voters that he might be physically frail.

In his campaign events, Trump has appeared neither frail nor mindful of the pandemic as a general matter. His campaign has not enforced a policy of mask-wearing or social distancing, leading to packed events at airport hangars in states like Iowa and Florida that are confronting rising case counts. The president has continued to predict that the virus will soon disappear, despite mountains of evidence to the contrary.

The Biden campaign, already framing the race as a referendum on Trump’s handling of the public health crisis, has accentuated the contrast between Trump’s indifference to health guidelines and the former vice president’s more cautious approach.

Biden, who served for decades as a U.S. senator from Delaware and has strong institutionalist instincts, has previously expressed strong opposition to expanding the Supreme Court. But in recent weeks, as Republicans have rushed into a Supreme Court confirmation process even with voting underway, Biden has repeatedly dodged questions on the issue of court packing, insisting that his focus is instead on potential judicial threats to the Affordable Care Act and at times responding brusquely when pressed on the issue.

On Thursday, though, under repeated questioning from the moderator, George Stephanopoulos, Biden appeared to commit to clarifying his position before Election Day.

“You’ll come out with a clear position before Election Day?” the moderator pressed.

“Yes, depending on how they handle this,” Biden said while discussing the nomination process of Judge Amy Coney Barrett. He also repeated his view that he has “not been a fan of court packing.” 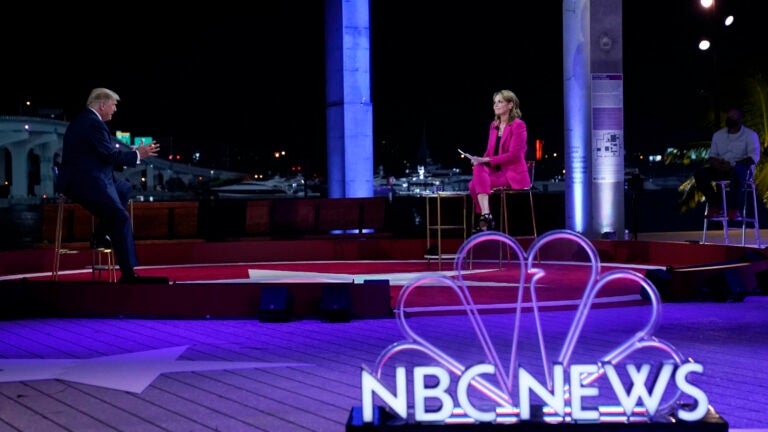