WASHINGTON – The polls are once again delivering feel-good boosts to Democrats: Joe Biden beats President Donald Trump by 10, 11 or 12 points nationally, depending on the day. His edge in Michigan, Pennsylvania and Wisconsin averages eight. Experts promise better than 4-in-5 odds of a new president next year.

But then the partisans remember that they have been here before, four years ago this week. The conflicting emotions can be overwhelming.

“I am feeling anxious and trapped between a sense of unbridled optimism and sheer dread,” said Abington Township, Pa., Commissioner Bill Bole, who like many Democrats never thought Trump could defeat Hillary Clinton in 2016 and was stunned when he did.

“It’s really tough to live in this sort of bifurcated state of watching the polls and trying to glean trends from them but also not really incorporate them into your thinking,” he said.

Bole is not alone. Democrats went to the polls last time certain that they would elect the first woman ever to become president, and got surprised with a Trump upset. This time they feel the push coming from a thousand miles away. The worry is visceral and widespread, unassuaged by Biden’s lead in the polls.

“Because of what happened to us in 2016, folks still remain cautious,” said Michigan Democratic Party Chair Lavora Barnes. “Nobody is taking anything for granted, even the folks that we’re meeting at doors and talking to on the phones.”

With the benefit of hindsight, even the most partisan tacticians caution that the election result remains unknown. Polling, which has consistently shown Biden well ahead and en route to winning in the electoral college, is but a snapshot, with a built-in margin of error that can go either way or not at all. Voting may have begun, but there are still weeks to go, and voters have changed their minds before.

“I don’t know anyone in my Democratic pollster world who is sitting 100% comfortably or anything like that,” said Nick Gourevitch, a partner at Global Strategy Group who has been polling on the presidential race. “Biden seems in better shape, but it is still a polarized country and a Trump win is still within the realm of possibility.”

This uncertainty has become a point of leverage for Trump, who has always dismissed polls that reflect badly on him as “fake” efforts to suppress his voters. It has also become a rallying cry for Democrats, who have been warning the country — and their own voters — against complacency.

Privately, Trump’s advisers are less bullish than the boss, admitting that he is behind in several key states. But they believe he can close the gap over the next 15 days, and have no interest in broadcasting anything short of certainty.

“The mainstream news media has spent the last four years trying to destroy and defeat President Trump, so why would anyone put faith in polling paid for by these same organizations?” Trump campaign spokesman Tim Murtaugh said. “The president is going to be reelected.”

On the Biden side, the creeping sense of deja vu has become a dominant feeling.

“The thing is, people don’t react logically. They react emotionally to this,” said Ed Rendell, a former Pennsylvania governor and top Biden surrogate who has been trying to calm nervous Democrats by pointing the better polling, lack of a strong minor-party candidate, and some promising early-voting figures when compared with four years ago.

“And emotionally, you see the same scenario developing all over again.”

Biden campaign manager Jen O’Malley Dillon has been telling donors, activists and voters to assume that the current polling leads will not last, even as the campaign also argues that Trump’s approach to campaigning with large crowds in the midst of a surging pandemic is exactly the opposite of what swing voters want to see. She has said Biden does not have a double-digit lead.

“National polls tell us very little about the pathway to 270 electoral votes,” O’Malley Dillon wrote Saturday in a memo to donors. “We also know that even the best polling can be wrong, and that variables like turnout mean that in a number of critical states we are functionally tied.”

The Democratic super PAC Priorities USA has for a year included slides in its presentations predicting the election’s outcome in a shock scenario – in which Biden gets three percentage points less of White working class support than polling suggests and the turnout among people of color is four percentage points lower than predicted.

As of Oct. 9, that scenario gave Biden 257 electoral votes and Trump 239 electoral votes, leaving three states — Nevada, Pennsylvania and Michigan — as too close to call. A jump ball to 270.

That doesn’t mean that Biden’s advantage is a mirage, just that the reality is more complicated and less conclusive that many would like at this point, say public opinion experts on both sides of the political divide.

Polling shows Biden’s position stronger on several fronts than Clinton’s advantage at this point in 2016, including in the national polls, which do not always correlate to electoral college outcomes.

“You get a much different sense that the concrete has settled in this race because views of Trump are so intensely negative, but they are not intensely negative with Biden,” said John Anzalone, a top pollster for the Biden campaign. “In ’16, Trump and Hillary’s negatives were essentially identical.”

Anzalone points to Biden’s leads among independents, seniors, White college graduates and suburban voters, all of which Clinton lacked. There is also a much smaller minor-party vote evident this cycle, removing a crutch that helped Trump win states such as Wisconsin with 47% of the vote.

But even Anzalone does not describe himself as above the stress that afflicts many in his party.

“The only answer to that is to have a healthy supply of alcohol on election night,” he jokes. “It is OK.”

Anita Dunn, a senior adviser to the Biden campaign, said Democrats have been much more cautious in 2020 in their polling assumptions, and intentionally less dependent on polling as a bellwether than the Clinton effort four years earlier.

“Their mistake was they believed them in 2016 and thought she was going to win based on polling,” Dunn said. “I think the lesson has been learned that polls that are three weeks out are a snapshot of a race three weeks out.”

Pollsters also have learned from their mistakes in the 2016 race, which revealed huge differences in the electorate depending on educational attainment, which many surveys had not factored in.

“Adjusting for over representation of college graduates was critical, but many polls did not do it,” concluded a report after the last election from the American Association of Public Opinion Research, which included input from The Washington Post’s polling team.

Since then, some of the most prolific state polls, including Monmouth University’s, have started to weight their samples by educational attainment to make sure they are not falling prey to survey bias based on voters with more degrees being more likely to answer their phones. Yet several firms have not, including Marist College, Mason-Dixon and EPIC-MRA, which conducts Michigan polls for the Detroit Free Press.

Trump-supporting partisans note other factors that they believe will swing the result in their direction.

Four years ago, three weeks out from the election, Hillary Clinton was up 12 points in Michigan and seven points in both Pennsylvania and Wisconsin, according to the RealClearPolitics Average. Trump won all those states, with final-week polls showing Clinton’s advantage fading.

One Trump campaign adviser, who spoke on the condition of anonymity because the person was not authorized to speak publicly, remembers thinking after reviewing the data after the final debate in 2016 that Clinton would win. But some voters changed their minds, and undecideds broke away from the Democrat.

“Nobody should be comfortable. It’s very similar to what we saw four years ago,” the person said.

Democrats have long said Trump’s ascent in the final days of that campaign was boosted by an announcement by FBI Director James Comey that the agency was looking anew at emails related to her private computer server.

That circumstance will not afflict Biden, though Trump continues to talk about Hillary Clinton’s time in office and has recently fixated on emails allegedly contained in a laptop once owned by Biden’s son Hunter.

Biden enters the final weeks with a lead in Pennsylvania that is slightly narrower, according to The Post analysis, than it was for Clinton three weeks before the 2016 election.

Other factors that are hard to predict are what impact Trump’s massive investment in voter turnout and registration will play in the final result, and whether the president’s recent return to holding mass rallies will create a sense of momentum.

“We know the president being on the road moves numbers combined with an aggressive ground game, which Joe Biden doesn’t have,” Trump campaign adviser Corey Lewandowski said.

Democrats share some of this concern. They have watched their voters turn out early this year, embracing vote by mail and other forms of early voting – but will not know until Election Day whether those early votes cannibalize the numbers they might otherwise have seen on Election Day. Republicans, by contrast, expect most of their voters to turn out on Election Day.

“We’re sort of like a high-jumper jumping as high as we can without yet knowing how high the bar will be because Republicans will set that on Election Day,” said Wisconsin Democratic Party Chair Ben Wikler. “The sense among Democrats is a deep-rooted sense that anything could go wrong at every moment, so we have to do everything we possibly can.”

Bole, 47, the township commissioner in Pennsylvania, still becomes emotional as he tells the story of his young daughter waking up the morning after Election Day in 2016 and asking: “Did our girl win?” Before the returns came in, he was “100%” certain that Clinton would defeat Trump, he said.

Bole won office last year, and he has watched a “strong blue wave” sweep over Pennsylvania’s Montgomery County and other suburban communities, signaling a rejection of Trump. But that is not enough for him to be certain this time.

“I think a little bit of the reticence this year has to do with not knowing what lives between those polls,” he said of the surveys that keep coming in. “How many voices aren’t lining up for parades? Or phone banking? How many people are just waiting in the wings and are going to go quietly cast their vote and tip this one direction or the other?” 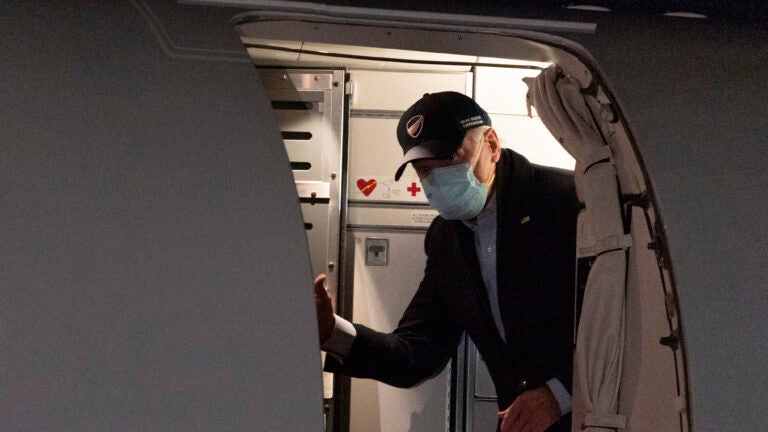