Newly confirmed U.S. Supreme Court Justice Amy Coney Barrett will immediately be embroiled in some of the nation’s biggest legal battles, including cases that could determine whether the president who nominated her gets four more years in the White House.

Barrett, 48, who will take her seat just a week before Election Day, joins a court already deliberating pending voting disputes from North Carolina and Pennsylvania. She could play a pivotal role in any post-election legal fights, and will take part when the court hears a challenge to the Affordable Care Act a week after the election.

The Republican-controlled Senate confirmed Barrett on an almost party-line 52-48 vote Monday night. Barely an hour later, she appeared alongside a beaming President Donald Trump at the White House, where arch-conservative Justice Clarence Thomas administered one of the two required oaths of office.

Barrett, who can start work Tuesday after she takes her second required oath in a private ceremony at the court, vowed to stay above politics.

“The oath that I have solemnly taken tonight means at its core that I will do my job without any fear or favor and that I will do so independently of both the political branches and of my own preferences,” Barrett said at the White House.

Never before has a justice joined the Supreme Court so close to an election — or with a president openly saying he might need the new member’s vote to win another term. Barrett was studiously noncommittal when Democrats asked at her confirmation hearing whether she would disqualify herself from cases over the election. Federal law gives justices broad latitude to decide when to recuse.

For months, Trump has claimed, despite scant evidence, that mail-in voting would lead to widespread election fraud, and has been laying the groundwork for a legal fight.

Barrett “will make an outstanding justice on the highest court in our land,” Trump said Monday. “This is a momentous day for America, for the United States Constitution, and for the fair and impartial rule of law.”

The Supreme Court is already addressing pre-election skirmishes over the rules for casting and counting ballots in the contest between Trump and Joe Biden, the Democratic nominee. Just minutes before the Senate confirmed her, the court issued a 5-3 decision rejecting a Democratic attempt to revive an extension for the receipt of mail ballots in Wisconsin.

Elevating Barrett helps fulfill a long-standing Republican goal of transforming the federal bench into a conservative legal bulwark. With the clearest antiabortion record of any high court nominee in decades, her appointment is a major victory for evangelical Christian groups that are a crucial voting bloc for Trump as he heads into Election Day trailing Biden.

Barrett’s confirmation came just 38 days after the death of Justice Ruth Bader Ginsburg, who for 27 years anchored the court’s liberal wing. All Democrats in the Senate voted against Barrett’s confirmation, as did Susan Collins, R-Maine, objecting to confirming a justice so close to the election.

“The rushed and unprecedented confirmation of Amy Coney Barrett as associate justice to the Supreme Court, in the middle of an ongoing election, should be a stark reminder to every American that your vote matters,” Biden said in a statement released by his campaign late Monday night.

Democrats used procedural delays and a Judiciary Committee boycott to protest a process they say unfolded with undue haste after Ginsburg’s death, and as voting was underway to elect a new president and one-third of the Senate.

“The Senate has never confirmed a Supreme Court justice so close to the election,” Senate Democratic leader Charles Schumer said after the vote.

The ACA fight will test Democratic contentions that Barrett is a likely vote to overturn the law and its protections for preexisting conditions. The Trump administration is urging the court to declare the law invalid.

Barrett once criticized Chief Justice John Roberts Jr.’ reasoning in his pivotal 2012 opinion upholding the core of the law, also known as Obamacare. At her confirmation hearing, she said those comments weren’t pertinent to the latest case.

Barrett could have to make a key decision on abortion in a matter of days. The court is scheduled to consider at a private conference on Friday whether to hear Mississippi’s defense of a law that would ban most abortions after 15 weeks of pregnancy.

Mississippi is asking the Supreme Court to say for the first time that states can ban abortions even before the fetus becomes viable. Four justices would have to agree for the court to take up the case.

And on Nov. 30, she and her colleagues will hear an expedited Trump administration appeal on the president’s bid to exclude undocumented immigrants from the census count. The court is likely to decide that case, which could affect the allocation of congressional seats and federal dollars, by the end of the year.

Barrett’s election-season nomination and the rapid confirmation process drew the ire of Democrats. They pointed to the refusal of Senate Republicans to even give a hearing to President Barack Obama’s nominee, Merrick Garland, to fill a vacancy that arose in February 2016.

While the number of justices has been set at nine since 1869, the Garland experience and the Barrett nomination have ignited a campaign by Democratic activists to expand the court.

Biden has said he would appoint a commission to consider court reform, while Schumer has said everything would be on the table next year if Democrats take back the Senate. 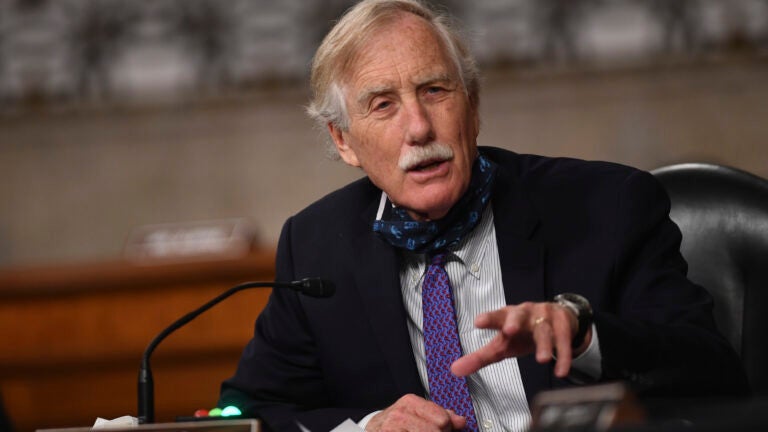