WASHINGTON — The mob of Trump supporters pressed through police barricades, broke windows and battered their way with metal poles through entrances to the Capitol. Then, stunningly, they breached the “People’s House” itself, forcing masked police officers to draw their guns to keep the insurgents off the chamber floor.

“I thought we’d have to fight our way out,” said Rep. Jason Crow, D-Colo., a former Army Ranger in Iraq, who found himself captive in the House chamber.

What unfolded at that point, at times on national television, was a tableau of violence and mayhem that shocked the nation, one of the most severe breaches of the Capitol since the British invaded during the War of 1812 and burned it down.

An armed standoff ensued in the House chamber, with police officers drawing their weapons. A pro-Trump protester casually monkeyed around at the dais of the Senate. Intruders in Speaker Nancy Pelosi’s suite overturned desks and smashed photos. Others ripped artwork in Senate hideaway offices.

“This is what the president has caused today, this insurrection,” Sen. Mitt Romney, R-Utah, said as he and other senators were hustled off to a secure location. 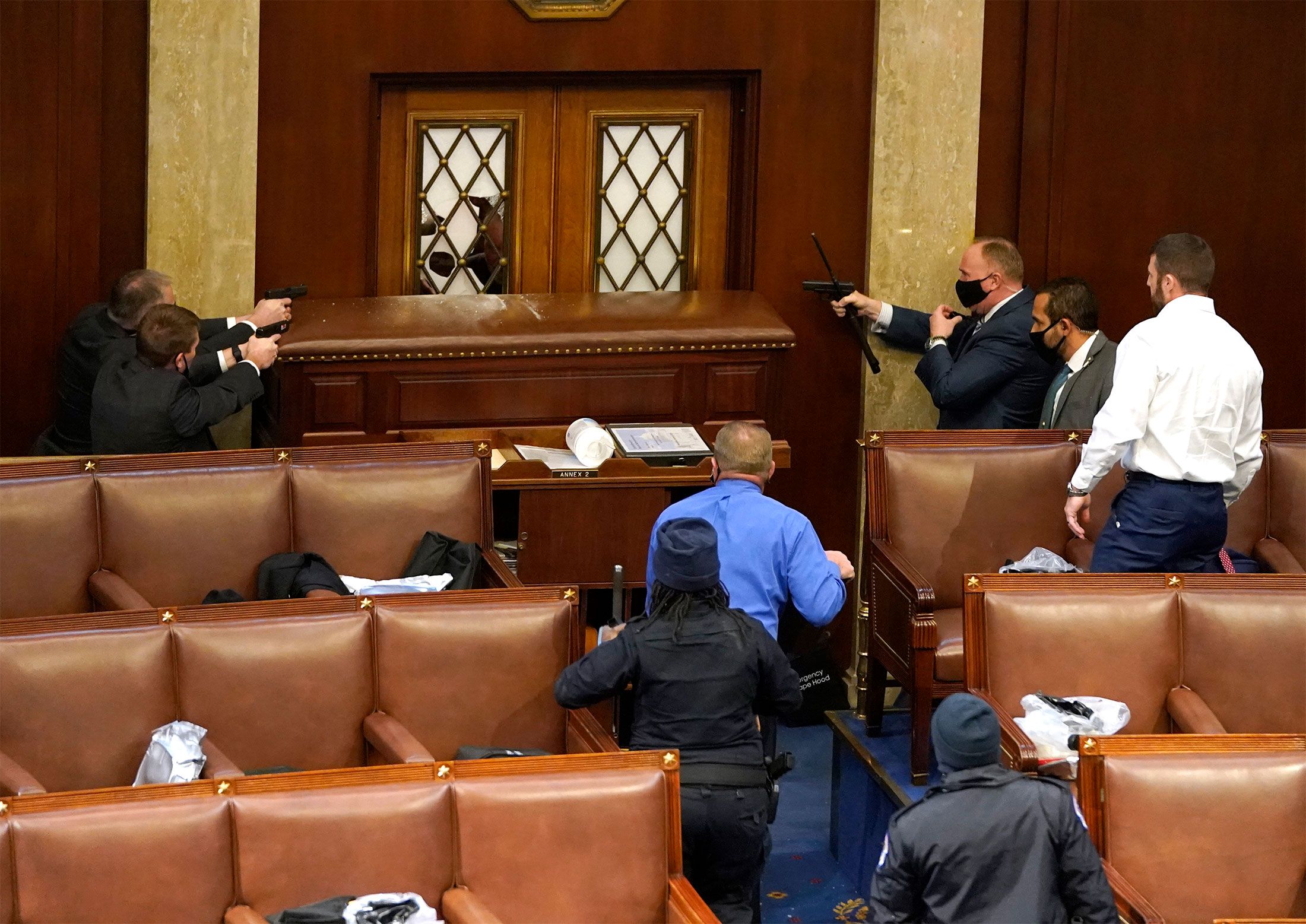 Capitol police officers point their guns at a door that was vandalized in the House Chamber.

Some of the protesters gawked at the grand and storied building they had unlawfully flooded while others looked at it with contempt.

“I don’t trust any of these people,” said Eric Martin, 49, a woodworker from Charleston, South Carolina, as he marveled at the opulence of the Capitol and helped a friend wash pepper spray from his eyes. “Absolute power corrupts absolutely.”

But if some only stared at the Capitol, others resorted to violence. A woman inside the building was shot and later died, the District of Columbia police said, and multiple officers were injured. Two explosive devices were found around noon near the headquarters of the Republican National Committee, then destroyed by a bomb squad. And the federal authorities arrested a 70-year-old man from Alabama near the Capitol in possession of a firearm and materials to make several Molotov cocktails.

By Wednesday evening, the scene outside the Capitol had calmed, after Capitol Police, supplemented by FBI agents and Homeland Security officers with members of the National Guard on their way, squeezed protesters from every corner of the Capitol to the majestic Rotunda, then persuaded them to leave.

Before that was mayhem. At one point, as lawmakers and staff members were rushing out of a Senate chamber under assault, aides rushed back to grab boxes containing the Electoral College certificates, making sure that the protesters could not literally steal the results of the election.

It began around 1 p.m., when a mass of Trump supporters, some in camouflage and armed with baseball bats or knives, left the National Mall and, encouraged by President Donald Trump, ascended on the Capitol complex. Leaders exhorted the crowd through megaphones, “This is our house” and “Move forward!”

The few police officers standing on the steps of the Capitol were overwhelmed. Their flash bang grenades only invigorated the protesters. Around 2:30 p.m., an entrance near the west side of the Capitol descended into chaos as a wave of Trump supporters wearing Make America Great Again apparel pressed passed police barricades.

On the east side of the complex, people banged on the glass windows. Crowds charged past the front columns, and some pressed their faces into the glass. Others in camouflage used poles to batter an entrance to the building, breaking it open. The crowd then rushed through, passing through metal detectors as one man blared a Trump speech about the “stolen” election through a speaker.

For about an hour, the Trump loyalists went in and out of at least one entrance of the Capitol with little disruption from the police.

As debate progressed in the House chamber over a Republican protest of Arizona’s Electoral College votes for President-elect Joe Biden, few lawmakers knew of the commotion. But Capitol Police officers were quietly locking down the building, instructing everyone in the hallways to shelter in place and preparing reporters for the possibility of doing so in the chamber.

Soon, a nervous energy pulsed through the room. The police began to close the gallery doors, which had remained open to allow for better ventilation as lawmakers streamed in. Congressional leaders were quickly ushered out, as staff aides urged lawmakers in the gallery and on the floor to remain calm.

“This is because of you,” Rep. Dean Phillips, D-Minn., yelled from the gallery at his Republican colleagues.

Rep. Elissa Slotkin, D-Mich., and a former Pentagon official, was on her way to the House chamber when she heard screaming, breaking glass, and what sounded like a flash bang. She returned to her office, locked the door, offered shelter to a colleague and began working the phones.

One of her first calls was to Gen. Mark Milley, chairman of the Joint Chiefs of Staff, to plead for help from the National Guard.

“I said, ‘Mark, I absolutely understand that you are between a rock and a hard place. But we need help here. There are weapons,’” she said.

In the House, just after 2:30 p.m., a police officer stepped on the dais and informed lawmakers that they might need to duck under their chairs.

“We now have individuals that have breached the Capitol building,” he said, warning them to be prepared to relocate to the cloakrooms. “They are in the Rotunda.”

Rep. Ruben Gallego, D-Ariz., a veteran, jumped on the arm rests of chairs and began directing members to move calmly and quickly from the chamber. Frantic shouting filled the room as lawmakers struggled to unfold the plastic bags that they were instructed to put over their heads in case of tear gas. Police officers and members of the floor staff began yelling for lawmakers to exit.

A wooden chest was pushed in front of the main doors to the chamber. Security officers drew their guns, pointing and shouting at the entrance, as lawmakers, staff aides and reporters cowered in the top levels of the chamber. There was a bang, and everyone was told to get down.

Shortly after 2:45, the evacuation resumed. With the police in the lead, guns drawn, the lawmakers entered a scene of havoc, Crow said. Some police officers scrambled to barricade other doors to block pro-Trump extremists. Others pinned some protesters to the ground to allow the lawmakers to pass.

“We heard yelling through the halls,” said Crow, who said he brought up the rear to ensure all the members made it to safely. As the police led the members down stairwells and into the subterranean maze of tunnels to a secure location, Crow said he called his wife in Colorado, who had been watching the scene on television. 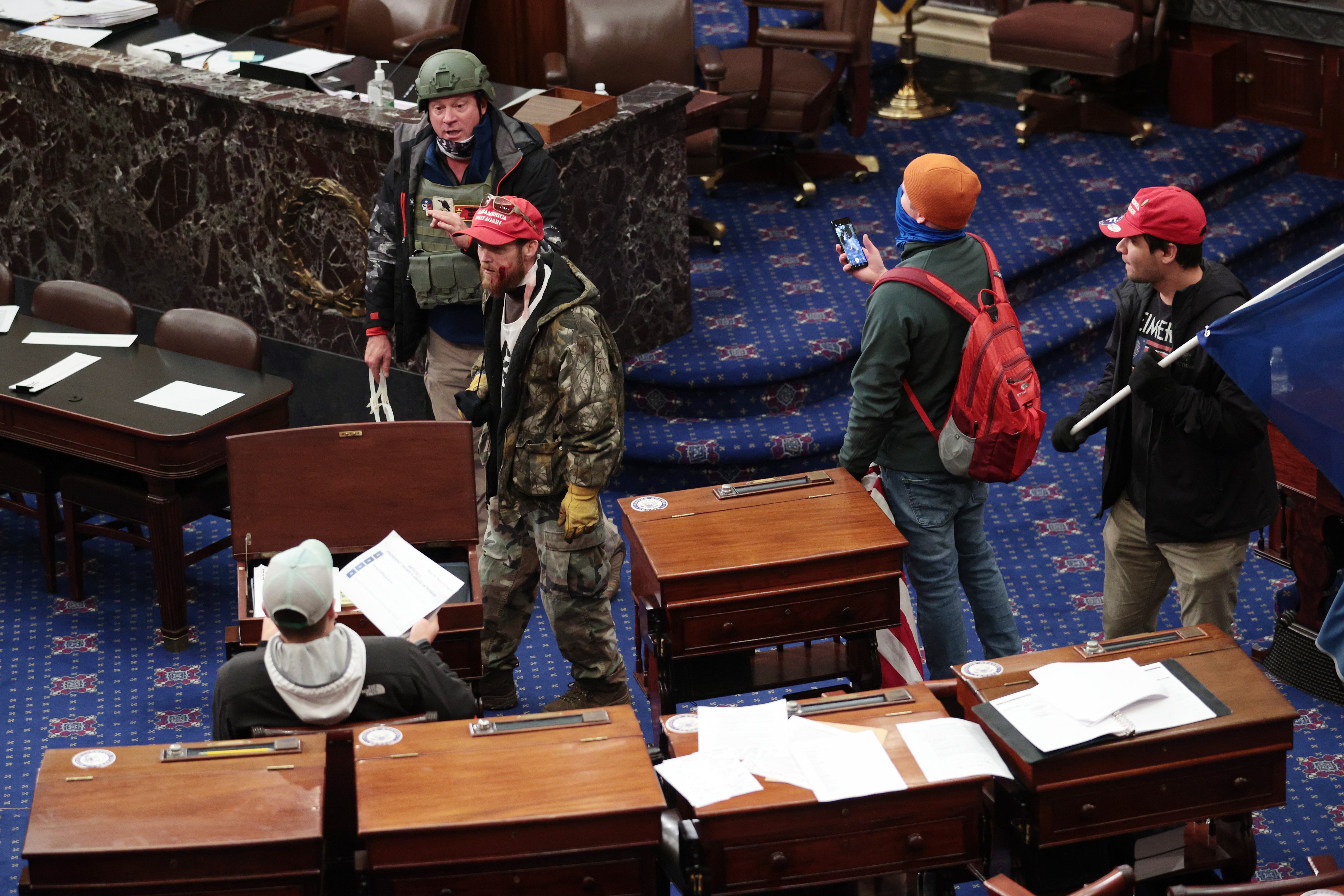 Pro-Trump extremists storming the Senate chamber. In a surreal scene of mayhem on Wednesday, hundreds of protesters roamed the halls of the Capitol, taking photos and breaking into offices.

But the mob continued to stream in. A young man in a red baseball hat was helping people through a broken window. Inside, two large wooden desks were on their sides, broken. Two large panels of glass were crushed on the colorful tile floor.

In a surreal scene of chaos and glee, hundreds of Trump loyalists roamed the halls, taking photos and breaking into offices. No police officers were in view. In a room where there were images of mountains and maps of Oregon on the wall, a man in a leather jacket ripped a scroll with Chinese characters. A young man put a framed picture of the Dalai Lama in his backpack.

“We’re claiming the House, and the Senate is ours,” shouted a sweaty man in a checked shirt, shouted, stabbing his finger in the air.

Nearby in the first-floor Crypt, the heart of the Capitol building, the police appeared to be overwhelmed. One wiped tear gas from his eyes.

When a man approached to ask where the bathroom was, he said softly, “We just need you guys to get out of here safely.”

An officer with the U.S. Capitol Police tried to reason with the crowd.

“You guys just need to go outside,” he said to a man in a green backpack. Asked why the police were not forcing the mob out, the officer said, “We just got to let them do their thing for now.”

Another officer stood by a stairway, watching everything unfold and answering a few questions, including directing a woman to the bathroom. One protester came up to him and shouted in his face, “Traitor!” When another man approached to apologize to the officer, the officer replied, “You’re fine.”

“Everybody’s been OK today, except that guy,” he said, motioning to the yeller.

Most of the crowd in the Crypt just milled around. A young man in a red Trump hat smoked a cigarette. Several men shouted and screamed. A man in a backpack with two American flags jumped up and down underneath a chandelier, yelling, “Whose house,” as the crowd answered, “our house.” The sound boomed and reverberated around the tile and marble, as the police looked on.

Around 3:30 p.m., about 25 police officers had entered the Crypt and started asking people to move back. A few minutes later, dozens more, wearing riot gear and some in gas masks, ejected the roughly 150 protesters in the Crypt. But not before one man marched through the halls of Congress with a Confederate flag while another protester raised a Trump flag from the balcony of the Capitol.

Protesters repeatedly exited from the building bearing trophies that they had torn off walls. A few carried “Area Closed” signs that they had snatched and then stormed past. But it was objects stolen from Pelosi’s office were especially popular.

One man emerged from the risers set up on the steps of the Capitol, wielding a piece of a wooden plaque that marked the entrance to Pelosi’s office.

He held it up like a trophy, as hundreds of people on the steps below cheered wildly. “Not our speaker!” shouted one woman. “Get her out!” shouted another man.

Another man, Richard Bigo Barnett, 60, stood outside the Capitol, his shirt ripped open and his chest bared to the cold, bragging about how he had gotten into the speaker’s office. He was brandishing an envelope with the speaker’s letterhead.

“I left a quarter on her desk for it,” he said, adding, “I wrote her a nasty note, put my feet up on her desk.”

Others turned their vitriol on the police.

“We backed you,” one man shouted at the line of officers outside. “Traitors!”

By 7 p.m., the presence of police officers and federal agents had drastically increased along the National Mall. Officers pushed back against aggressive protesters as they prepared for the possibility of more potential unrest overnight.

At the Capitol, lawmakers prepared to resume their session counting electoral votes that would end the Trump presidency.

“We want to go back,” Crow said. “And finish the business of the people to show that we are a democracy, and that the government is stronger than any mob.” 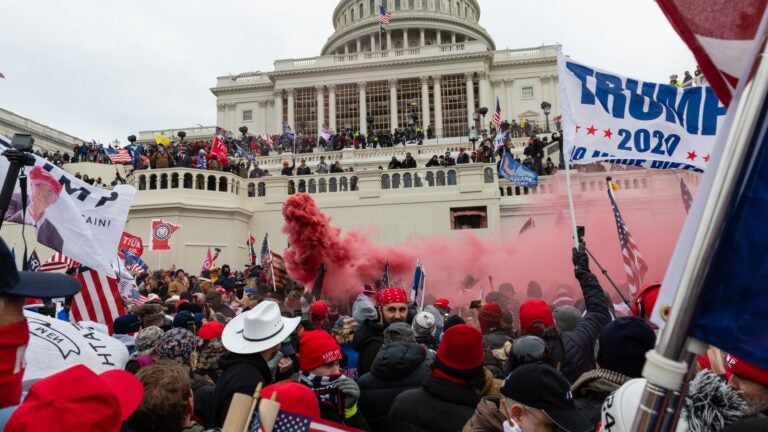