Anyone who traveled from Massachusetts to Washington, D.C., with the intent of participating in Wednesday’s violent attack on the Capitol will face prosecution in the Bay State, U.S. Attorney Andrew Lelling said Thursday.

“The Constitution protects the right to freedom of speech and assembly,” Lelling said in a statement “What it does not protect is a violent assault on government institutions. Americans on the right and left must re-learn the difference. Anyone who traveled from Massachusetts with the intent to commit such crimes will be prosecuted in the District of Massachusetts.”

Scores of rioters supporting President Donald Trump stormed the Capitol building Wednesday afternoon, forcing lawmakers to hide and evacuate and, for a time, disrupting the process of certifying the Electoral College results. Congress returned late in the evening, confirming the victory of President-elect Joe Biden during Thursday’s early morning hours.

In the aftermath of the attack on the Capitol, federal law enforcement officials issued statements declaring that those involved with the breach, destruction, and violence would be held accountable and prosecuted.

The FBI asked anyone with information about participants and instigators to contact them.

The FBI is seeking to identify individuals instigating violence in Washington, D.C. We are accepting tips and digital media depicting rioting or violence in and around the U.S. Capitol on January 6. If you have information, visit https://t.co/buMd8vYXzH.

In a statement, FBI Director Christopher Wray called the attack on the Capitol a betrayal of the values of democracy:

The violence and destruction of property at the U.S. Capitol building yesterday showed a blatant and appalling disregard for our institutions of government and the orderly administration of the democratic process. As we’ve said consistently, we do not tolerate violent agitators and extremists who use the guise of First Amendment-protected activity to incite violence and wreak havoc. Such behavior betrays the values of our democracy. Make no mistake: With our partners, we will hold accountable those who participated in yesterday’s siege of the Capitol.

Let me assure the American people the FBI has deployed our full investigative resources and is working closely with our federal, state, and local partners to aggressively pursue those involved in criminal activity during the events of January 6. Our agents and analysts have been hard at work through the night gathering evidence, sharing intelligence, and working with federal prosecutors to bring charges. Members of the public can help by providing tips, information, and videos of illegal activity at fbi.gov/USCapitol. We are determined to find those responsible and ensure justice is served.

Acting Acting General Jeffrey Rosen said in a statement that arrests and charges will be made in the “coming days and weeks”:

Yesterday, our Nation watched in disbelief as a mob breached the Capitol Building and required federal and local law enforcement to help restore order.  The Department of Justice is committed to ensuring that those responsible for this attack on our Government and the rule of law face the full consequences of their actions under the law.  Our criminal prosecutors have been working throughout the night with special agents and investigators from the U.S. Capitol Police, FBI, ATF, Metropolitan Police Department and the public to gather the evidence, identify perpetrators, and charge federal crimes where warranted.  Some participants in yesterday’s violence will be charged today, and we will continue to methodically assess evidence, charge crimes and make arrests in the coming days and weeks to ensure that those responsible are held accountable under the law.

Four people died in the attack on the Capitol, including a woman in a crowd of people storming the building who was shot by Capitol Police. Authorities said the three other people died of medical emergencies, which have not yet been specified by officials.

D.C. police said Thursday that 68 people had been arrested by the department, with an additional 14 arrested by Capitol Police. More than 50 police officers were injured in the assault, several of whom are hospitalized. 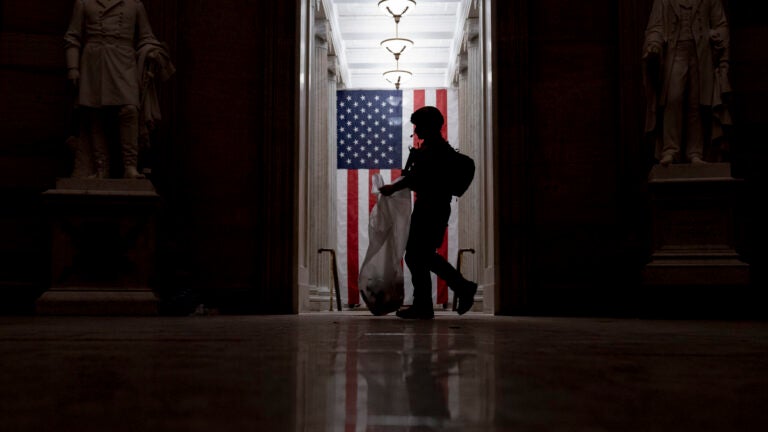 Photos: What the Capitol looked like after it was stormed by the pro-Trump mob