Twitter’s extraordinary action against President Donald Trump on Friday night was driven both by the violent rampage of his supporters in Washington and what the company said was a looming “secondary attack” on the U.S. Capitol and state government facilities next weekend – a finding that tracks with the open threats of violence independent researchers have also found across the Web.

Calls for widespread protests on the days leading up to the inauguration of President-elect Joe Biden have been rampant online for weeks. These demonstrations are scheduled to culminate with what organizers have dubbed a “Million Militia March” on Jan. 20 as Biden and Vice President-elect Kamala Harris are to be sworn in on the same Capitol grounds that rioters overran on Wednesday.

As with the online chatter ahead of that assault on the Capitol, these calls to action have bristled with violent talk and vows to bring guns to Washington in defiance of the city’s strict weapons laws. Twitter cited some of these posts in its announcement Friday night stripping Trump of his account and preventing him from creating new ones in the future. Some event listings are openly discussing delivering “justice” for Ashli Babbitt, a rioter and Air Force veteran who was fatally shot by police inside the Capitol on Wednesday.

“Plans for future armed protests have already begun proliferating on and off-Twitter, including a proposed secondary attack on the US Capitol and state capitol buildings on January 17, 2021,” Twitter’s announcement said Friday night, noting two recent Trump tweets it said were “likely to inspire others to replicate the violent acts that took place on January 6, 2021.”

Citing the potential for Trump’s words to incite others – even in the absence of clear references to violence – took Twitter’s enforcement actions to a restrictive new level, as commentators noted Friday night. But the fear that Trump’s social media postings were fueling violent action appears to be well founded by what researchers have detailed in their monitoring of far-right conversation online.

A detailed new analysis of such posts, by Alethea Group, an organization combating disinformation that draws its name from the Greek word for “truth,” found abundant evidence of threatening plans on a range of platforms large and small. The aggressive and often hateful chatter has appeared on both mainstream sites such as Twitter and Facebook and niche, conservative sites such as TheDonald.win and Parler.

“REFUSE TO BE SILENCED,” said one online post cited by Alethea Group, calling for an “ARMED MARCH ON CAPITOL HILL & ALL STATE CAPITOLS” for January 17, the last Sunday of Trump’s polarizing presidency. Another post calling for action at “DC & All State Capitols” and signed by “common folk who are tired of being tread upon” declares: “We were warned!”

“So much of the conversation right now is the general making of threats,” said Cindy Otis, vice president for analysis at Alethea. “There’s a risk of these particular dates leading to violence because that the kind of amped-up conversation we’re already seeing from people.”

Representatives for Parler did not respond Saturday morning to requests for comment. An unnamed moderator for TheDonald wrote an accusatory email in response to a request for commentthat used an obscenity to describe Washington Post reporters but did not respond to the substance of the query.

The Alethea report lists events planned for Jan. 17, as well as the day before the inauguration and on Inauguration Day itself. The specified locations include the U.S. Capitol and National Mall in Washington, the Utah Capitol in Salt Lake City, and locations in Pittsburgh and Columbus, Ohio. Some events, including an “Armed March on All State Capitals,” include localized events in all 50 states.

A post about the event in Pittsburgh included pictures of stockpiles of ammunition, the Alethea report said. An online militia forum called for recruits in Kentucky because “diplomatic efforts have been exhausted.”

“A popular guerilla [sic] onslaught is a nightmare for them,” said the anonymous writer of one post on the encrypted messaging service Telegram about the scattered militia events. “Is the military going to deploy in mass everywhere? They can’t.”

The report, while culled from public posts, also notes a shift toward communicating in closed, private groups on encrypted platforms such as Signal, suggesting there is significantly more organizing happening beyond the view of independent researchers and, likely, to authorities as well. 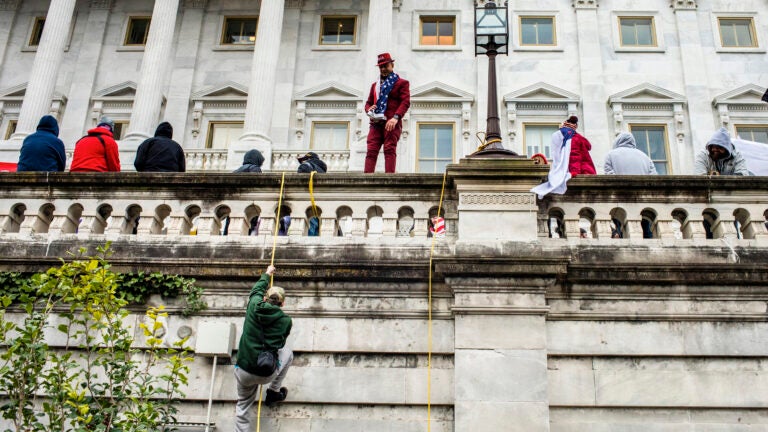 Man sentenced to 41 months for assaulting officer in Capitol riot