“It’s not often that you wake up on a morning feeling like this,” she said.

Gorman said she was overjoyed and shocked when she was approached by the Presidential Inaugural Committee about participating in the ceremony.

“I had not been expecting that at 22 they would trust me with such an honor,” she said. “And I was also daunted at the same time. I was honestly scared of writing such a poem. I wasn’t sure if I could do it justice, but I’m so glad that I put my best foot forward and did it.”

The 22-year-old had some items to comfort and empower her during her performance, including a ring given to her by Oprah in the shape of a caged bird, honoring Gorman’s idol and fellow inaugural poet Maya Angelou.

“In that way, I could feel like I had Maya close and continuing her tradition,” the poet said. “Oprah also bought my earrings as well. She was just so generous in making sure I felt prepared both emotionally and fashionably for the moment.”

Gorman, who became the the National Youth Poet Laureate while a student at Harvard, told Roberts that like Biden, she struggled with a speech impediment through her childhood, dropping several letters including the ‘R’ sound.

“It would take until probably I was 20, meaning that I couldn’t say words like ‘poetry’ or even ‘Gorman,’ which is my last name,” she said. “And I had to really work at it and practice to get to where I am today.”

At moments, she said she questioned why given her relationship with the sound, she chose to put the word “rise” in the inaugural poem several times. But at the same time, she said reciting the poem felt like a full circle moment.

“If I’d written this poem three years ago, I wouldn’t have been able to say it,” she said. “So it was me rising, I think, as well as the country at that time.”

“I wasn’t sure if I could do it justice. But I’m so glad that I put my best foot forward and did it.”@TheAmandaGorman shares what it was like to read her poem on inauguration. https://t.co/sMdO00lklJ pic.twitter.com/hYKLUky2Jf

“If I wrote this poem three years ago, I wouldn’t have been able to say it.”

Inaugural Poet @TheAmandaGorman, who has overcome a speech impediment, says it was a “full circle moment” to recite her poem at Biden’s inauguration. https://t.co/sMdO00lklJ pic.twitter.com/Fxr0kqJ4cS

“Keep changing the world, one word at a time.”

Inaugural Poet @theamandagorman shares that the caged bird ring she wore at the inauguration was a special gift from @Oprah!

It is tribute to her idol Maya Angelou, who wrote “I Know Why the Caged Bird Sings.” ❤️ https://t.co/sMdO00lklJ pic.twitter.com/jeLWiRNR8h

In interviews with both Good Morning America and CBS This Morning, Gorman said she has hopes of running for president herself one day — maybe in 2036.

“I’ll be back,” she told CBS This Morning. “This will be the first rodeo but it won’t be the last one.”

22-year-old inaugural poet @TheAmandaGorman captivated the nation yesterday with her performance of “The Hill We Climb.”@AnthonyMasonCBS shares more of his conversation w/ Gorman, who spoke about waiting to tell her mom the big news & how she plans to run for president one day. pic.twitter.com/ISJF2IVdNe 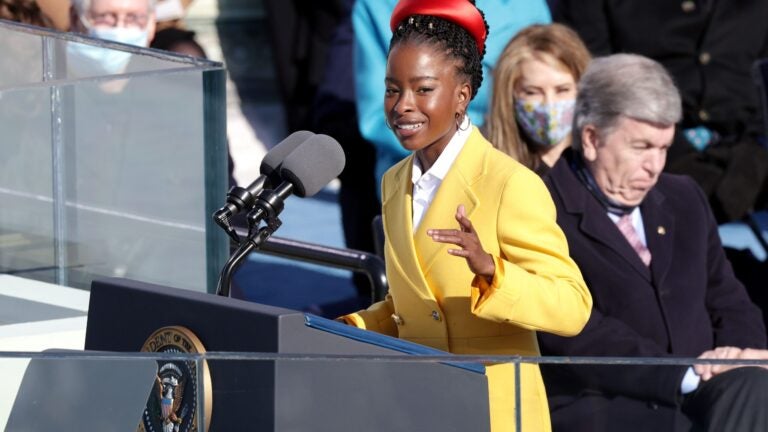