The GameStop stock surge has benefited small-scale investors, many of them surprised at their unlikely windfalls. Perhaps none so much as a 10-year-old boy from San Antonio, Texas.

The fifth grader was gifted 10 GameStop shares, each at $6.19, as a Kwanzaa present from his mother in December 2019. She bought the stock simply because her son liked to buy video games at the store and she wanted to teach him a little about the stock market.

In a matter of minutes this week, Jaydyn Carr became an unexpected beneficiary of the market mayhem, as his $60 stake in the video game retailer grew to $3,200.

“Is this really happening right now?” Jaydyn’s mother, Nina Carr, remembers asking herself. “I couldn’t believe it was true.”

Carr, 31, was working in her home office on Wednesday when a slew of news alerts about GameStop’s Reddit-spurred surge started appearing on her phone. Her jaw dropped.

Once she absorbed the news, she sprinted to her son’s bedroom.

“I was so excited for him,” she said. In simple terms, she described to Jaydyn what happened to his GameStop shares and why they suddenly skyrocketed.

“She was saying that stocks hardly ever go up this way, so if I wanted to sell it, we should sell it now,” Jaydyn said.

Ultimately, the choice was his.

“It wouldn’t be fair for me to make the decision on his behalf,” Carr explained. And besides, she added, “if he lost the money, it would have been a lesson learned.”

So, she asked her only child the burning question: “Do you want to sell or stay?”

To her relief, Jaydyn decided to sell.

“I was so excited. I thought it wasn’t even reality,” Jaydyn said.

Carr then walked her son through the selling process, and he cashed out his shares. The plan is to put $2,200 in Jaydyn’s savings account, and then invest the remaining $1,000 as a mother-son team.

When Carr bought the 10 GameStop shares in 2019 as a Kwanzaa gift, she certainly did not anticipate the value would one day spontaneously soar, she said. Her sole intention in purchasing the stock was to teach her then-eight-year-old son about Ujamaa, which means, “cooperative economics.” It’s one of the seven principles of Kwanzaa.

“The goal was to ensure he knows the value of a dollar and how to manage money,” Carr said, explaining that Ujamaa is the idea of sharing wealth, while also strengthening personal finances and self-reliance.

Beyond relating the gift to the deeper meaning of the holiday, Carr said that since Jaydyn’s father passed away in February 2014, it’s been a priority for her to educate her son about money management.

“I am very frugal, and saving is a big part of what I do. Being the only parent, I want to set a good example for him,” she said. “I got into finance when his dad passed away. I wanted to make sure his future was in good hands.”

According to Jaydyn, he has already learned a lot from his mom: “She is always teaching me what to do in emergencies in life and how to save money to one day buy a car and a house,” he said.

Carr – who is a public health nutritionist and runs her own business – felt the gift was an opportunity to reinforce the importance of investments, she said.

As for deciding which company to invest in, the choice was obvious: Jaydyn is a video game enthusiast, so “we were always in and out of GameStop, constantly getting different video games,” Carr explained. “I thought, how can I mix our principles of Kwanzaa with something I know he really wants?”

In an effort to ensure her son still had a proper present to open, “I had to figure out something to give this kid to unwrap,” she recalled. “I printed out a template and filled in his information, put it in a picture frame, and wrapped it up.”

While the gift may not have been the Xbox One he was hoping for, “he was definitely excited because it had GameStop’s name on it,” said Carr.

Plus, Jaydyn was especially jazzed after his mother explained to him that he owned a small portion of a company he loves.

More than two years later, the frame still sits in a place of honor in Jaydyn’s bedroom. Now, though, it carries new meaning – a memento of a once-in-a-lifetime experience.

While market manipulation is not a new phenomenon, the “magnitude, scale and speed of this was unprecedented,” said Veljko Fotak, a finance professor at the University of Buffalo.

Although the scheme is problematic in many ways, Fotak said, “I think the more kids learn and the more they understand the markets, the better equipped they are to plan for their own retirement, and the better off we are as a society.”

For Jaydyn, this is just the beginning. He’s already got big plans: “I am now looking for companies that pay dividends,” he said confidently. 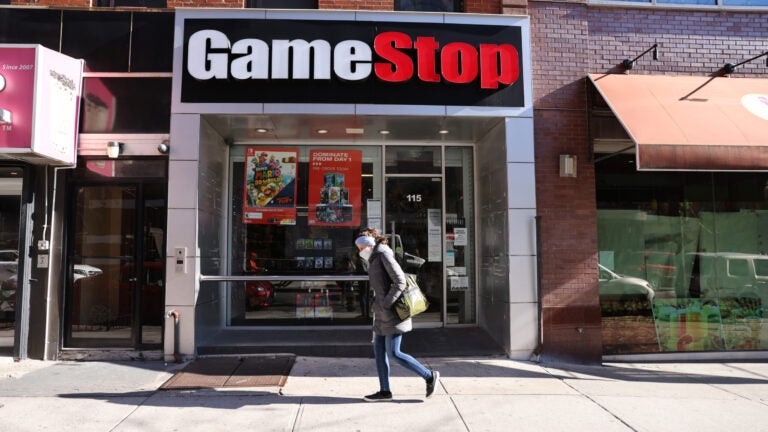 How Mass. Reddit user ‘Roaring Kitty’ and his friends roiled the markets