Lou Dobbs, one of former President Donald Trump’s most loyal media supporters, abruptly lost his pulpit Friday when Fox Business canceled his weekday television show, which had become a frequent clearinghouse for baseless theories of electoral fraud in the weeks after Trump lost the 2020 presidential race.

Dobbs’ decadelong tenure at the network ended with little warning — a guest host filled in for his Friday slot — only a day after election technology company Smartmatic filed a defamation lawsuit against Rupert Murdoch’s Fox Corp. and Fox News.

The suit, which seeks damages of at least $2.7 billion, also named Dobbs as an individual defendant along with two other Fox anchors, Maria Bartiromo and Jeanine Pirro. Smartmatic specifically cited Dobbs’ program, which by late last year had become so packed with falsehoods about Trump’s defeat that Fox Business was forced to run a fact-checking segment debunking some of its own anchor’s assertions.

Executives at Fox did not elaborate Friday about why they had canceled Dobbs’ program, which was the top-rated show on Fox Business and drew a bigger audience than its competition on CNBC. The network said in a statement that it regularly reviewed its programming lineup.

“Plans have been in place to launch new formats as appropriate postelection, including on Fox Business,” the network said. “This is part of those planned changes.”

A person familiar with Fox’s decision said the network’s concerns about Dobbs predated this week’s filing of the Smartmatic lawsuit. But the person, who requested anonymity to describe private personnel matters, conceded that Dobbs’ extreme and unrepentant endorsements of Trump’s false election claims had imperiled his position, as did other moments. For instance, on the day of siege at the U.S. Capitol, Dobbs described protesters as merely “walking between the rope lines.”

The cancellation came as lawsuits and legal threats are rippling the landscape of media organizations popular with right-wing viewers. Dominion Voting Systems has sued two lawyers who represented Trump, Rudy Giuliani and Sidney Powell, over false claims they made on Fox News and other outlets that the company aided President Joe Biden’s victory, and it is considering additional litigation.

Dobbs, 75, rose to fame as a CNN anchor, becoming a mainstay of television business news. He began hosting his Fox program in 2011, lured by the network’s co-founder Roger Ailes, and was watched by a soon-to-be-very influential fan: Trump, who shared Dobbs’ right-wing values, particularly the anchor’s hard-line stance against unchecked immigration.

The men also shared an interest in questioning President Barack Obama’s birthplace, a canard that helped lead to Dobbs’ exit from CNN in 2009.

At the White House, Trump came to see Dobbs’ program as required viewing; his allies learned that an appearance on “Lou Dobbs Tonight” would guarantee attention in the West Wing. The president even patched in the television host during some policy discussions with his White House staff.

Trump, who was barred from Twitter last month, has been circumspect since leaving the White House in what subjects he comments on. But roughly an hour after the news of Dobbs’ departure broke, the former president issued a statement to The New York Times.

“Lou Dobbs is and was great,” Trump said. “Nobody loves America more than Lou. He had a large and loyal following that will be watching closely for his next move, and that following includes me.”

The loyalty went both ways. As recently as Thursday, his final day on Fox Business, Dobbs spoke disparagingly of Republican Party leaders for, in his view, showing insufficient loyalty to Trump. He described Sen. Mitch McConnell and Rep. Kevin McCarthy, the Republican leaders in Congress, as “toadies for the Democratic Party.”

Dobbs remains on contract with Fox, but the network has no plans to put him back on the air, according to a person briefed on its plans. For now, a rotating group of hosts will replace Dobbs in his 5 p.m. slot. Anchors Jackie DeAngelis and David Asman will sit in for him next week. (“Lou Dobbs Tonight” repeats at 7 p.m.) The cancellation was reported earlier by the Los Angeles Times.

The Smartmatic lawsuit filed Thursday cited a false claim from a November episode of “Lou Dobbs Tonight”: that Hugo Chávez, the former president of Venezuela, had a hand in the creation of Smartmatic technology, designing it so that the votes it processed could be changed undetected. (Chávez, who died in 2013, did not have anything to do with Smartmatic.)

The Chávez claim was made by Powell, who worked as a lawyer for Trump and was a frequent guest on Dobbs’ program. She was also sued by Smartmatic on Thursday, along with Giuliani. Dobbs was also cited in the lawsuit for using the phrase “cyber Pearl Harbor” to describe a supposed vote-fraud conspiracy, borrowing language used by Powell.

There are signs that the other hosts named in the suit, Bartiromo and Pirro, may be in a more favorable position with Fox management than Dobbs.

It was clear weeks ago that defamation suits from Smartmatic and Dominion could be imminent. Since then, Bartiromo was picked to audition for a new 7 p.m. program on Fox News, and Pirro debuted a new travel program, “Castles USA,” on the Fox Nation streaming service, in which she visits castles around the country.

Fox has pledged to fight the Smartmatic litigation, saying in a statement: “We are proud of our 2020 election coverage and will vigorously defend this meritless lawsuit in court.”

Don Herzog, who teaches First Amendment and defamation law at the University of Michigan, said it was possible that canceling Dobbs could aid Fox in its defense of the lawsuit. If Dobbs had continued to discuss Smartmatic or promote allegations of election fraud on his program, the network could have been liable for each new claim, Herzog said.

Fox officials could also argue that the lawsuit made them aware of untruths that Dobbs had helped spread. And in a trial atmosphere, the cancellation of Dobbs’ program might help convince jurors that the network was acting in good faith.

Such was the sudden nature of Dobbs’ exit that even the anchor who filled in for him on Friday, Asman, did not appear to have been briefed on the news.

At the end of the 5 p.m. broadcast, Asman smiled at the camera, wished his viewers a happy weekend, and added a parting note:

“Lou will be back on Monday.” 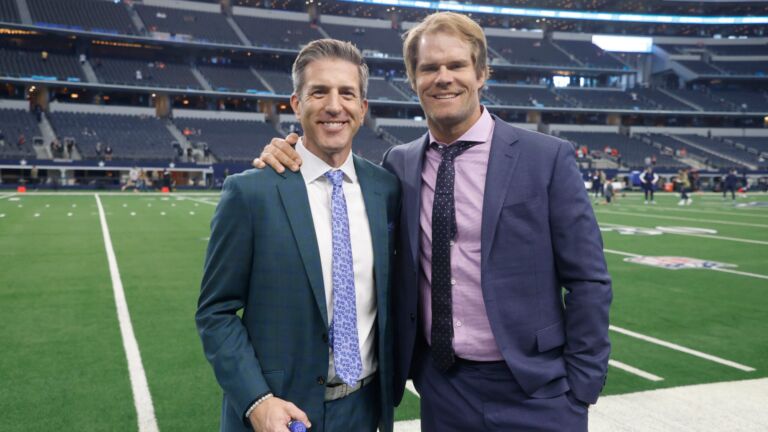 Fox has done well replacing Joe Buck on its baseball and football broadcasts, and other thoughts