Abraham Sanchez knew exactly how he wanted to spend his stimulus check.

Like millions of Americans, he had begun dabbling in the stock market during the pandemic. So, soon after $1,400 from the federal government landed in his bank account last week, Sanchez, a 28-year-old trumpet player in Sacramento, California, moved all but $200 of it into his Robinhood online trading account. He then used most of it to buy 80 shares of AMC Entertainment, the struggling movie theater chain.

“I was like, ‘You know what? Whatever. I’ll give it a shot,’” he said. When the stock rose last week after AMC announced it was preparing to reopen theaters in California, Sanchez gained $170 on paper. “It was kind of nice,” he said. The shares have since fallen, but he is still sitting on a paper profit of about $120 and does not plan to sell.

Sanchez is by no means wealthy. While the pandemic halved what he used to make from his gig in a brass band, he gets by because of his day job as a store manager. He worries that the pandemic might flare up again or cost him his job. But Sanchez, who lives with three roommates, did not need the stimulus money to make ends meet. So he was willing to gamble.

“If I were to lose a good sum of money, it wouldn’t be good,” Sanchez said. “But I’m willing to take the risk, you know, if it can put me ahead for the next couple of months.”

The speculative appetite of small investors like Sanchez may seem at odds with an economy still reeling from a pandemic that has killed more than a half-million Americans, decimated jobs and snuffed out businesses and livelihoods. But one of the biggest tools deployed by the U.S. government to cushion the economic blow — stimulus payments — is also driving a huge surge in investing by small traders.

Analysts at Deutsche Bank recently estimated that as much as $170 billion from the latest round of stimulus payments could flow into the stock market. They conducted a survey of retail traders in which respondents said they planned to put roughly 40% of any payment they received — or $2 of every $5 — into the stock market. Traders between the ages of 25 and 34 said they expected to put half of their stimulus check into stocks.

“That could lead to a bit more mania, speculation in the market,” said Patrick Fruzzetti, managing director and partner at Hightower Advisors, an investment firm. The “stimmies,” he said — using a popular online term for stimulus checks — will go into people’s trading accounts, and “they will trade.”

For a decade before the pandemic, small investors accounted for roughly one-tenth of trading activity in the stock market. But in the last year, they have become responsible for close to one-quarter, according to Goldman Sachs analysts.

Individual traders were behind the sudden surge this year in the value of GameStop, a troubled video game retailer, which forced some big Wall Street traders into losses. Their trading helped push the S&P 500 index up nearly 80% since it hit bottom last March. They have even driven up the price of Bitcoin and other cryptocurrencies.

All told, the federal government has doled out as much as $3,200 in direct payments to individuals who meet the criteria for stimulus money, starting with $1,200 checks as part of the CARES Act last April. Those payments helped many people stay afloat, but they also padded the incomes of some who never lost their jobs or their savings. And with travel halted, restaurants shut and normal activity nearly at a standstill, the stock market got a big cut of the money intended to restart the economy.

The willingness of millions of Americans to use emergency federal assistance as play money for speculation speaks to the unique nature of the current economic downturn and the government response to it.

While about 9 million jobs have disappeared since the onset of the pandemic, those losses have been unevenly distributed. Low-paying industries such as bars, restaurants and tourism, which depend on large gatherings, have borne the brunt, while well-paying jobs in the professional services sector have been resilient as people switched to working from home.

In the interest of speed, however, the federal rounds of assistance have been aimed broadly, distinguishing little between those who have lost jobs and those who remain financially healthy. The result is that, as a whole, the American public has rarely been more financially secure. Between April and January, government transfers exceeded wage and income loss by about $800 billion, according to Fitch Ratings, leading to a boom in savings.

“I cannot stress enough how unusual this recession has been,” said Vincent Deluard, global macro strategist at StoneX, a brokerage firm. “This is the first recession in the history of mankind where people have gotten significantly richer than they had been at the beginning of the recession.”

Typically, during economic downturns, people cling to cash, cut spending on nonessentials and hunker down until there are signs of a recovery. Stock prices usually suffer. During the 2008 financial crisis, for example, the S&P 500 collapsed nearly 57% from its peak to its March 2009 nadir. It took four years for the index to return to its previous peak.

The current crisis started this way, too. In February and March last year, the S&P 500 plunged nearly 34% as panicked investors sold shares. The market began reversing course in late March after the Federal Reserve cut interest rates to nearly zero and restarted programs that pumped money into financial markets.

Big Wall Street investors, comforted by the Fed’s moves, barreled right back into the stock market. But alongside the whales were minnows.

In March, Google searches for “how to buy stock” soared. Account openings at brokerage firms shot up. Trading in tiny amounts of stock options — a favorite of retail traders — picked up. The brokerage industry’s shift, in recent years, to a commission-free trading model pioneered by Robinhood, the preferred app of young investors, helped the boom. So did social media, which enabled millions of people stuck at home to research stock trading ideas, exchange tips and brag about their wins.

“Threw my stimmy into the stock market and damn, it’s been a beautiful morning,” Sanchez, the trumpet player, wrote on Twitter on Monday.

The Treasury Department began distributing the latest round of payments last weekend, and roughly 85% of U.S. households will ultimately receive them. The latest round follows payments in April and January, when a total of more than $400 billion was sent out.

For Victoria Brown, a 25-year-old in Wilmington, Delaware, with a secure job in government, the $1,400 stimulus check is more of an opportunity than a lifeline. She has already moved the money into her Robinhood account and plans to use some of it to buy the stock of Zomedica, a pet health company she owns 1,000 shares of.

In a recent note to clients, market analysts with JPMorgan found that the intensity of retail trading in the stock and options markets “has exhibited correlation with previous rounds of U.S. stimulus checks.”

In April, more than $3 trillion in government transfer payments poured into bank accounts of Americans, mostly through $1,200 checks. The S&P 500 surged nearly 12.7% that month, in a rapid snapback from a 12.5% fall last March.

In January, almost $2 trillion in government transfer payments were sent to Americans after the December passage of a further $600 in stimulus checks. That month, retail trading activity exploded. The passage of the Biden administration’s American Rescue Plan, with the latest stimulus, could prompt another retail surge.

Andre Pierre is waiting for his check. Employed full time and living with his parents in Brooklyn, he envisions using some of it to buy stocks.

He started trading in October after watching the market run higher for months. He began with electric-vehicle stocks such as Nio, then transitioned his holdings into Apple. Now he is eyeing a few stocks in the marijuana industry. 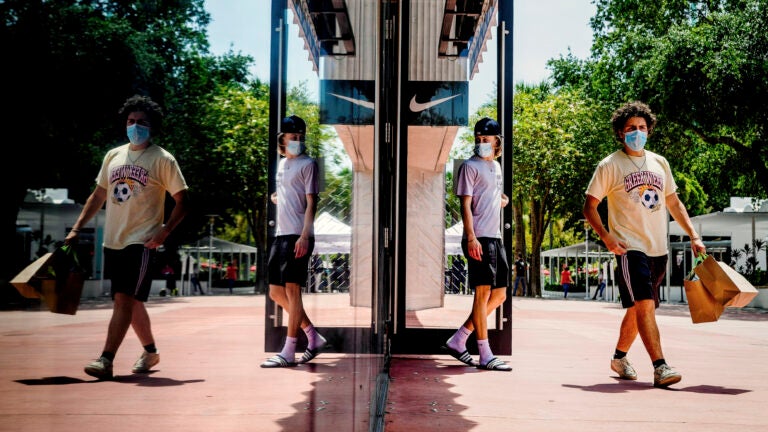