Apollo 11 astronaut Michael Collins, who piloted the ship from which Neil Armstrong and Buzz Aldrin left to make their historic first steps on the moon in 1969, died Wednesday of cancer, his family said. He was 90.

Photo 1: Kat Vinson
Photo 2: One of our all time favorite photos thanks to @TimeLifeUS

Collins was part of the three-man Apollo 11 crew that effectively ended the space race between the United States and Russia and fulfilled President John F. Kennedy’s challenge to reach the moon by the end of the 1960s.

Though he traveled some 238,000 miles to the moon and came within 69 miles, Collins never set foot on the lunar surface like his crewmates Aldrin and Armstrong, who died in 2012. None of the men flew in space after the Apollo 11 mission.

“It’s human nature to stretch, to go, to see, to understand,” Collins said on the 10th anniversary of the moon landing in 1979. “Exploration is not a choice really — it’s an imperative, and it’s simply a matter of timing as to when the option is exercised.”

In a statement, acting NASA administrator Steve Jurczyk said: “Whether his work was behind the scenes or on full view, his legacy will always be as one of the leaders who took America’s first steps into the cosmos.”

“I guess you’re about the only person around that doesn’t have TV coverage of the scene,” Mission Control radioed Collins after the landing. 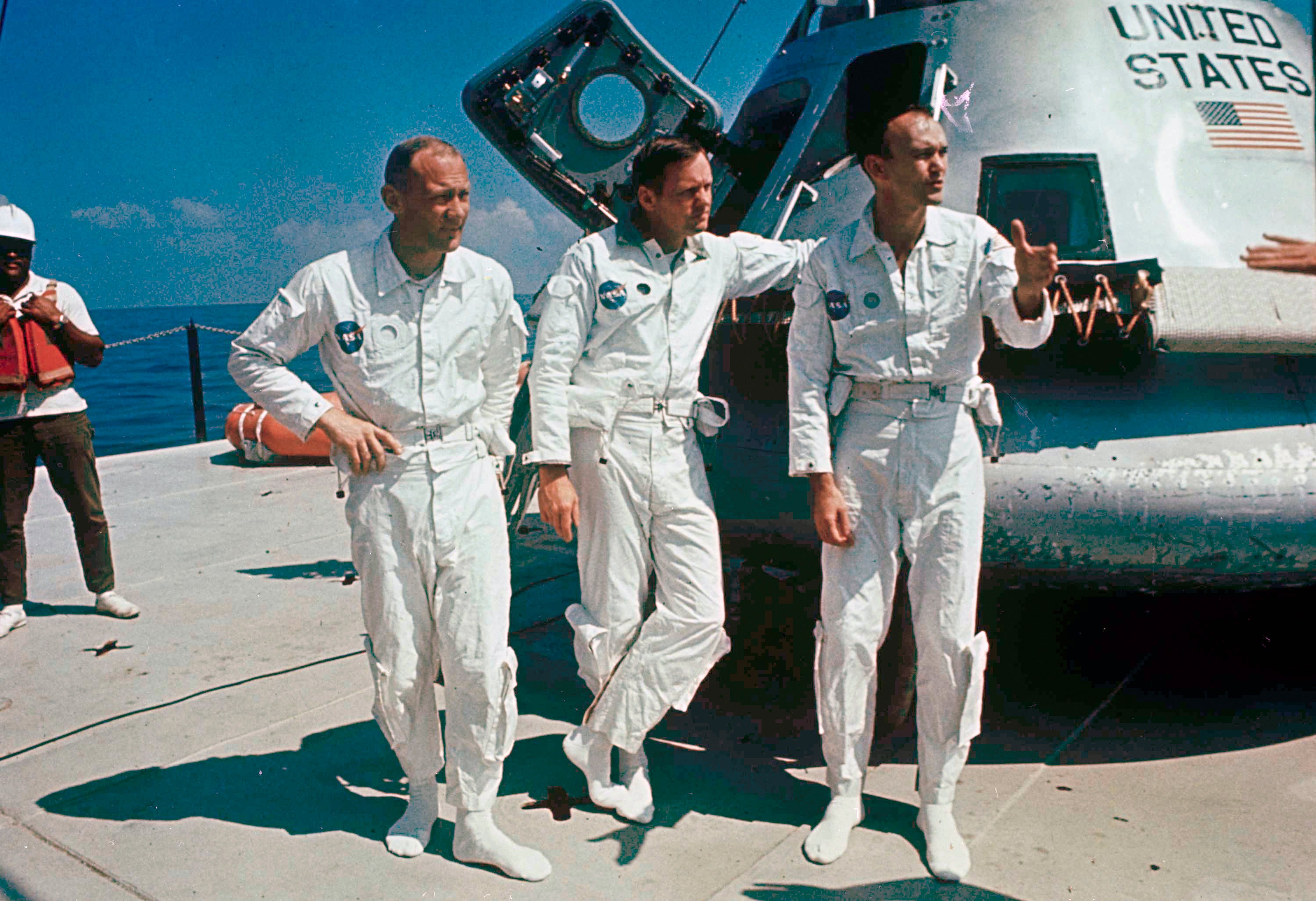 In this 1969 photo, Apollo 11 astronauts, from left, Buzz Aldrin, Neil Armstrong, and Michael Collins stand next to their spacecraft.

Collins was alone for nearly 28 hours before Armstrong and Aldrin finished their tasks on the moon’s surface and lifted off in the lunar lander. Collins was responsible for re-docking the two spacecraft before the men could begin heading back to Earth. Had something gone wrong and Aldrin and Armstrong been stuck on the moon’s surface — a real fear — Collins would have returned to Earth alone.

Though he was frequently asked if he regretted not landing on the moon, that was never an option for Collins, at least not on Apollo 11. Collins’ specialty was as a command module pilot, a job he compared to being the base-camp operator on a mountain climbing expedition. As a result, it meant he wasn’t considered to take part in the July 20, 1969, landing.

“I know that I would be a liar or a fool if I said that I have the best of the three Apollo 11 seats, but I can say with truth and equanimity that I am perfectly satisfied with the one I have,” he wrote in his 1974 autobiography, “Carrying the Fire.” “This venture has been structured for three men, and I consider my third to be as necessary as either of the other two.”

Collins was born in Rome on Halloween 1930. His parents were Virginia Collins and U.S. Army Maj. Gen. James L. Collins. After graduating from the U.S. Military Academy in 1952, a year behind Aldrin, Collins joined the Air Force, where he became a fighter pilot and test pilot.

John Glenn’s 1962 flight making him the first American to orbit the Earth persuaded Collins to apply to NASA. He was accepted on his second try, in 1963, as part of the third group of astronauts selected. Collins’ first mission was 1966′s Gemini 10, one of the two-man missions made in preparation for flights to the moon.

Along with John Young, Collins practiced maneuvers necessary for a moon landing and performed a spacewalk during the three-day mission. During the spacewalk, he famously lost a camera, which is frequently cited as one of the items of “space junk” orbiting Earth.

On Jan. 9, 1969, NASA announced that Collins, Armstrong and Aldrin would be on the crew of Apollo 11, the United States’ first moon landing attempt. Of his fellow Apollo 11 astronauts, Collins said they were: “Smart as hell, both of them, competent and experienced, each in his own way.” Still, Collins called the group “amiable strangers” because the trio never developed as intense a bond as other crews.

Of the three, Collins was the acknowledged jokester. Aldrin called him the “easygoing guy who brought levity into things.” In summarizing Kennedy’s famous challenge to go to the moon, for example, Collins later said: “It was beautiful in its simplicity. Do what? Moon. When? End of decade.”

The Apollo 11 crew trained for just six months before launching on July 16, 1969, from Florida’s Cape Canaveral. The mission insignia — an eagle landing on the moon with an olive branch in its talons — was largely Collins’ creation.

Collins said one of the things that struck him most was the way the Earth looked from space — peaceful and serene but also delicate.

“As I look back on Apollo 11, I more and more am attracted to my recollection, not of the moon, but of the Earth. Tiny, little Earth in its little black velvet background,” Collins said while marking the mission’s 50th anniversary in 2019.

In contrast, he said the moon seemed almost hostile. In fact, it was considered so hostile that on their return, Collins, Armstrong and Aldrin all spent several days in a quarantine trailer. They received visitors, including President Richard Nixon, staring through a window.

When the group was finally deemed safe, they went on a world tour, visiting 25 countries in just over five weeks.

Collins often remarked that he was surprised that everywhere they went people didn’t say “Well, you Americans finally did it.” Instead, they said, “Well, we finally did it,” meaning “we” humans.

Early on, Collins said Apollo 11 would be his last mission, though officials at NASA wanted him to continue flying. Collins soon left NASA and joined the State Department as assistant secretary for public affairs. Though he enjoyed the people he later wrote that “long hours in Washington flying a great mahogany desk” didn’t suit him.

After about a year he left and joined the Smithsonian Institution. There, he led a team responsible for planning and opening the Smithsonian’s Air & Space Museum, where the Apollo 11 capsule and artifacts now reside, including some of Collins’ personal items from that mission — flight checklists, his toothbrush, razor and a tube of Old Spice shaving cream.

Along with his autobiography, Collins wrote a book on his experience for younger readers, “Flying to the Moon: An Astronaut’s Story.” In a 1994 preface to the book, Collins urged more spending on space exploration and on a manned mission to Mars.

“I am too old to fly to Mars, and I regret that. But I still think I have been very, very lucky,” he wrote. “I was born in the days of biplanes and Buck Rogers, learned to fly in the early jets, and hit my peak when moon rockets came along. That’s hard to beat.” 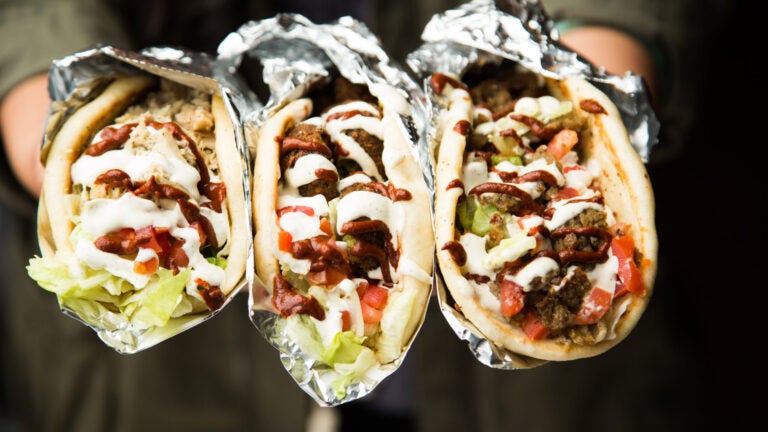 The Halal Guys opens in Cambridge this weekend