Debris from a large Chinese rocket landed in the Indian Ocean near the Maldives early Sunday, China’s space administration announced.

It said most of the debris had burned up on re-entry. It was not immediately clear whether any of what remained had landed on any of the Maldives’ 1,192 islands.

The rocket, a Long March 5B, launched the main module of China’s next space station, Tiangong, on April 29. Usually, the large booster stages of rockets immediately drop back to Earth after they are jettisoned, but the 23-ton core stage of the Long March 5B accompanied the space station segment all the way to orbit.

Because of friction caused by the rocket rubbing against air at the top of the atmosphere, it soon began losing altitude, making what is called “uncontrolled reentry” back to Earth inevitable. The chances that debris would strike anything or hurt anyone were slight, but not zero, and people around the world kept a wary eye on its trajectory for days.

China’s space administration, which had said nothing about uncontrolled reentry until Sunday, announced that the debris had entered the Earth’s atmosphere over the Mediterranean before flying over the Middle East and coming down near the Maldives, south of India. People in Israel and Oman reported sightings of the rocket debris on social media.

Jonathan McDowell, an astrophysicist at the Center for Astrophysics in Cambridge, Massachusetts, who tracks the comings and goings of objects in space, said on Twitter that an ocean splashdown had always been the most likely outcome but that the episode raised questions about how China designs its space missions.

“It appears China won its gamble (unless we get news of debris in the Maldives),” he wrote. “But it was still reckless.”

What is the rocket, and what was it launching?

Long March 5B is China’s largest rocket and one of the largest in use by any nation. The country’s space program needed a large, powerful vehicle to carry Tianhe, the main module of Tiangong, the new space station, which is to be operational by 2022 after more pieces are launched and connected in orbit.

The full rocket contained multiple pieces. Several smaller side boosters dropped off shortly after the launch, crashing harmlessly in the Pacific Ocean. (Disposing of used, unwanted rocket pieces in the ocean is a common practice.) But the core booster stage — a 10-story cylinder weighing 23 tons empty — carried the Tianhe module into orbit.

In recent decades, rocket stages that reach orbit typically fire the engine again after releasing their payloads so that they drop out of orbit, aimed at an unoccupied area like the middle of an ocean.

China did not do that for this launch

Has this happened before, and will it happen again?

China has a long history of letting pieces of its space equipment come down where they may.

Rockets from one of its principal launch sites, the Xichang Satellite Launch Center in Sichuan province, routinely fell on rural areas downrange, occasionally causing damage. China has since moved many of its launches, including the Long March 5B’s, to a new site in Wenchang, a city on Hainan, an island off the southeastern coast.

Last year, the first launch of a Long March 5B rocket lifted a prototype of China’s crewed space capsule. The booster from that rocket also made an uncontrolled reentry, with some debris raining down on an Ivory Coast village.

With more large pieces of China’s space station scheduled to go to orbit, more launches of the Long March 5B are expected through 2022. Unless there is a change to how China operates it, the odds that someone will be hurt by a piece of a falling booster will grow.

Have other countries’ rockets recently had uncontrolled reentries?

In March, an out-of-control SpaceX rocket stage reentered Earth’s atmosphere near Seattle, surprising residents there as it lit up night skies. Pieces of the rocket landed on a farmer’s property in Washington state. In that case, a firing of the engine of the second stage to bring it down safely did not occur as planned.

And earlier in the history of spaceflight, the first space powers had uncontrolled reentries of their own. The American Skylab, which operated in 1973 and 1974, broke up as NASA scientists tried to guide its descent in 1979. The 77-ton station mostly broke up over the Indian Ocean, but debris scattered across Western Australia. President Jimmy Carter apologized.

What could have happened to China had the debris hit something?

There is an international legal framework based on treaties from the 1960s and ’70s in which a country can demand payment for damage caused by another country’s falling rocket.

That has happened once, after Cosmos 954, a Soviet satellite that was powered by a nuclear reactor, crashed in Canada in 1978. Canada billed the Soviet Union for part of the cost of cleaning up the radioactive debris.

What else is China doing in space?

In recent years, China has completed a series of impressive achievements in spaceflight. Months ago, it put a spacecraft, Tianwen-1, in orbit around Mars; and in December, it collected rocks from the surface of the moon and brought them back to Earth.

It hopes to further advance its Mars mission In May or June by landing a robotic rover, Zhurong, on the red planet’s surface. So far, only the United States has had lasting success during attempts to land on Mars.

As it works to make steady progress on space station construction, China could also launch a crew to orbit next month in a spacecraft called Shenzhou. Once in space, they are to dock with the Tianhe module. 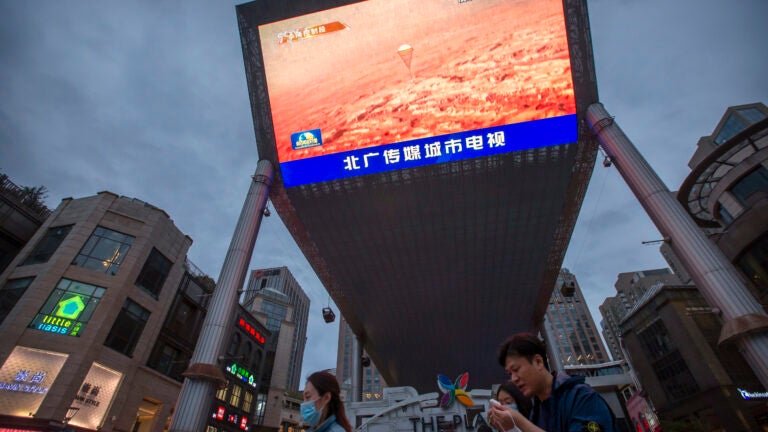