When the Navy pilot first spotted the strange object hovering in restricted airspace off the Atlantic coast, he was stunned – no exhaust plume, no visible engine and all the makings of something secret, something mysterious or something dangerous.

Perhaps because for him and some of his former Navy colleagues, such a sighting became a regular occurrence.

“Every day,” Graves said in an interview with CBS’s “60 Minutes” that aired Sunday. “Every day for at least a couple years.”

The retired lieutenant’s matter-of-fact remark stopped “60 Minutes” correspondent Bill Whitaker, who cut in: “Wait a minute. Every day for a couple of years?”

Graves has told his story before. But the interview – part of a “60 Minutes” report dedicated to the subject – signaled something new: UFOs are going mainstream.

The shift – from kooky conspiracy to the object of congressional inquiry – has accelerated in recent years, fueled by the revival of a Pentagon unit to investigate the sightings.

And in the next six weeks, a report is due that is required to make public everything the government knows about UFOs.

The report, which will be released in June, was mandated by an obscure provision in last year’s $2.3 trillion appropriations bill and requires the director of national intelligence to work with the secretary of defense on a “detailed analysis of unidentified aerial phenomena data and intelligence” gathered by the Office of Naval Intelligence, the Unidentified Aerial Phenomena Task Force and the FBI.

Former director of national intelligence John Ratcliffe hinted in a March interview that the report would be big. Since then, other officials have said it would likely be an interim report with more to come in the months that follow.

Whatever its contents, the authors now have the country’s attention.

And a group of retired military men have been working to ensure that Americans take the issue seriously.

One of them, Luis Elizondo, a former senior intelligence officer and a go-to UAP spokesperson, told Whitaker that any unknown object tooling around U.S. airspace unidentified should be considered a national security risk.

Sometimes, there are simple explanations for the objects, he said; but sometimes there are not.

What most concerns him are those that intelligence experts can confidently say are not drones, balloons or space junk, but show signs of novel technology.

It’s a straightforward argument: If pilots keep seeing these objects – some of which have flown around United States bases – and some of the most clued-in members of the military industrial complex cannot explain them, shouldn’t the country’s leaders try to get to the bottom of it?

This line of thinking has persuaded the likes of Sen. Marco Rubio, R-Fla., who is vying to succeed former Senate majority leader Harry Reid, D-Nev., as the chamber’s most vocal backer of UFO inquiry.

“Anything that enters an airspace that’s not supposed to be there is a threat,” Rubio said on “60 Minutes.”

Rubio described “a stigma on Capitol Hill” around UFOs – colleagues who roll their eyes or snicker at the prospect of their august body tackling such a subject.

“Some of my colleagues are very interested in this topic and some kind of, you know, giggle when you bring it up,” Rubio said. “But I don’t think we can allow the stigma to keep us from having an answer to a very fundamental question.”

Rubio, who serves as vice chair of the Senate Intelligence Committee, said the United States should have a method for gathering and studying the data as it comes in – and then comparing notes across agencies. The forthcoming report is supposed to provide a detailed description of a process for doing so.

Sunday’s “60 Minutes” episode also introduced close observers to a new voice: former Navy Lt. Cmdr. Alex Dietrich, who said she had an “unsettling” encounter with an unidentified flying object over the Pacific Ocean in 2004.

Dietrich was one of four aviators to see the object, which was also captured by a camera and radar. She and her Navy colleague, Cmdr. Dave Fravor, described a “little white Tic-Tac-looking object” about the size of their fighter jets.

“No predictable movement, no predictable trajectory,” said Dietrich, who had not spoken publicly about the experience before.

The Navy jets were unarmed, and Dietrich recalled feeling vulnerable to attack.

“You know, I think that over beers, we’ve sort of said, ‘Hey man, if I saw this solo, I don’t know that I would have come back and said anything,’ Dietrich said. “Because it sounds so crazy when I say it.”

It’s a microcosm of the scenario that the officials who are speaking out say they’re trying to avoid. They don’t want the country ill-prepared, they say. But first, they’ll need to get people to listen. 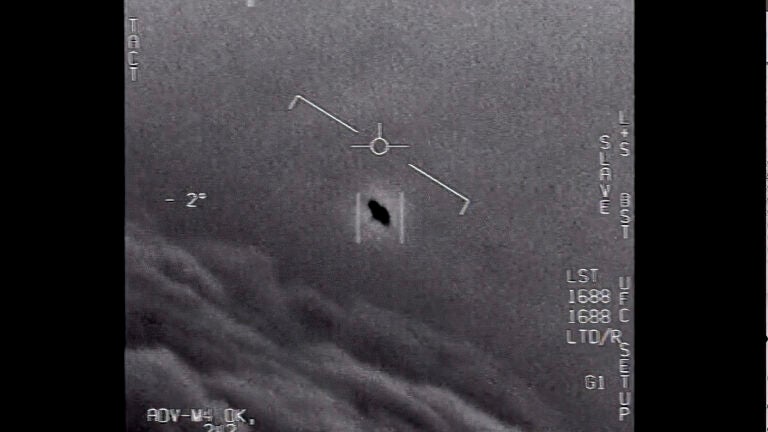