Avery Sanford was days away from graduating from high school in Virginia when her estranged father emptied a trailer containing 80,000 pennies onto the front lawn of her home last month.

“My mom came out and was like, ‘What are you dumping in my yard?’ ” she told WTVR. “She didn’t know who it was until he shouted, ‘It’s your final child support payment.’ “

Devastated by her dad’s display, Sanford, 18, her mother and several friends picked up the tens of thousands of pennies and wondered what they should do next. Their answer: Donate the $800 in coins to a domestic abuse center.

Officials with Safe Harbor Shelter, a Richmond organization offering services for survivors of domestic violence, sexual violence and human trafficking, confirmed the donation to The Washington Post on Thursday.

“They were able to turn such a negative experience, and what her daughter witnessed, into a positive,” Cathy Easter, executive director of Safe Harbor, told The Post. “They found a way to turn this around and not feel devastated about it.”

Since local media first reported the story this week, the shelter says it has seen a spike of more than $5,000 in donations, with some people citing the family as a reason for their gifts.

Efforts to reach Sanford and her mother were unsuccessful Thursday. The mother and father have not been publicly identified.

Home-security footage obtained by The Post shows a man in an SUV pull up to a house with a trailer attached to the vehicle on May 21. The man operated the trailer so that it dumped the pennies on the front lawn and sidewalk of the home before driving away, video shows.

“What are you dropping in my . . . yard?” Sanford’s mother said, according to video.

Henrico County Police Lt. Matt Pecka told The Post that an officer responded last month around 2:30 p.m. to “a domestic-related incident” in Glen Allen, Va., about 14 miles north of Richmond. When the officer arrived, authorities found a large amount “of pennies in the roadway in front of the address,” with Sanford’s mother saying her ex-husband was responsible for the dump.

“Henrico police documented the incident; however, no charges were filed,” Pecka said.

When she got home from school, Sanford couldn’t believe what she saw.

“It’s not just my mom he’s trying to embarrass, it’s also me and my sister,” Sanford told WTVR. “It’s upsetting that he didn’t consider that before he did that.”

Five days later, Mary Maupai got an email in her inbox from a stranger. Maupai, the development director at Safe Harbor, said Sanford’s mother, who had no previous affiliation with the organization, explained what happened, noting how May 21 was the deadline for her ex-husband’s final child-support payment of $825. The mother mentioned that Sanford was about to graduate from Deep Run High School and attend Virginia Tech in what should be an exciting time for her, Maupai told The Post.

“Instead, she had to witness this spectacle from her estranged father,” the mother wrote May 26, according to an email obtained by The Post.

Safe Harbor, which was founded in 1998, is among the victim-services groups nationwide that have seen their access to federal funding dramatically cut in recent years.

So when Sanford’s mother wanted to donate the money to the center, Safe Harbor was grateful for the gift. But Easter and Maupai did not expect what happened next: a flood of donations spurred by the family’s action. Maupai noted that gifts citing Sanford’s donation as a catalyst for donating ranged between $25 and $1,000.

“The fact that these gifts are coming in at this time is just like a godsend,” Easter said. “I’m very sorry the family experienced this, but so grateful they reached out and chose to do this and share their story.”

As bizarre as it might be to unload that many pennies out of spite, it’s not the only recent instance of someone dumping tens of thousands of pennies in front of a home. When a Georgia man demanded his last paycheck after leaving his job at an automotive repair shop, his ex-boss responded by leaving more than 91,000 pennies in his driveway in March.

Efforts to reach Sanford’s father were unsuccessful. In an interview with WTVR, the father said he was frustrated and that he did not mean to worsen the situation between him and his daughter. Sanford told the news station that while her father’s decision was “really hurtful and damaging” to the family, she was proud that the money ended up going to a good cause.

“Turning around and donating that money to moms and children in need, I feel like that really turns this situation into a positive,” she said. “You can learn from it.”

Maupai hopes Sanford’s act will inspire others to donate to victims shelters. For Easter, she cannot remember a time in the shelter’s history when a harsh event morphed into something more hopeful.

“It’s truly such a beautiful story,” she said. “The importance of being kind to each other cannot be stressed enough.” 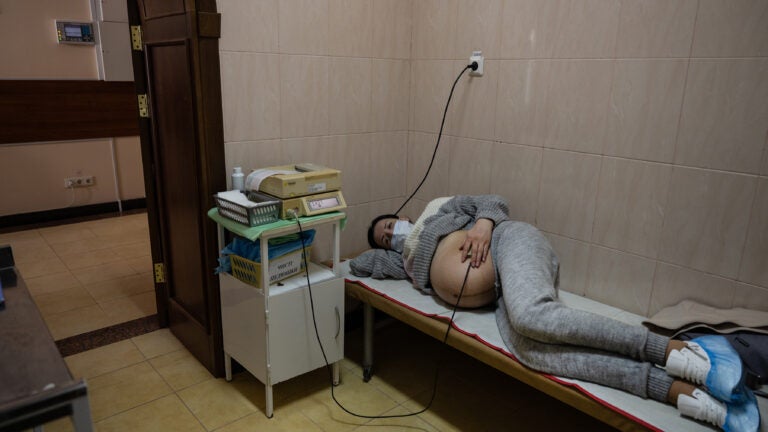 ‘He is a child of war’: giving birth amid chaos in Ukraine