Three young women are touring the West together this summer, united by something they never imagined they’d have in common: They all had the same cheating boyfriend. At the same time.

Instead of feeling bitter about their discovery, Abi Roberts, 19, of Salt Lake City, and Bekah King, 18, and Morgan Tabor, 21, who both live in Boise, said they decided the best way to cope was to move on – in a 30-year-old school bus that they bought and renovated themselves over 2½ months.

The trio hit the road almost a month ago and are currently camped out in Bozeman, Mont., where they’re hiking, taking in nature and sharing a lot of laughs. They’re documenting their adventures on their Instagram page, “The BAM Bus,” which they named after each of their first initials.

“We’re living our dream life, having a blast,” Tabor said. “It’s incredible to think that it happened because of him.”

The trio’s unexpected friendship started last December around the holidays, when Tabor had a suspicious feeling about her boyfriend. They had dated on and off for several years, but at that point had agreed to date exclusively.

She noticed that her boyfriend, a 20-year-old college student who lives down the street from her parents’ house in Boise, was texting several women and receiving flirty comments on his social media posts, she said.

“I had this uneasy feeling that I couldn’t shake, so I looked up one of the girls’ names on Instagram,” said Tabor, who works at an organic produce company.

What she discovered shocked her.

“Almost all of the photos on this girl’s page showed her with this guy who I’d thought was my boyfriend,” she said.

Tabor contacted the woman on Instagram, and she was equally stunned, she said. The two dug further, and found Roberts, a Utah State University student and artist whose name they spotted on their busy boyfriend’s social media accounts.

“When Morgan contacted me, it was the most insane feeling ever,” said Roberts, who had been dating her Boise beau since Halloween last year in a relationship she believed was exclusive.

“This guy had literally slept at my house the night before, kissed me goodbye and said he was driving back to Boise [from Utah] to visit his family,” she said.

Instead, he turned up at Tabor’s house in the middle of her long FaceTime chat with Roberts.

“We were talking, and I suddenly heard his car outside and he came to the door with flowers,” Tabor said.

“Hey, look here,” she recalled telling him. “I’ve made some new friends.”

“Watching his face drop when he saw who I was talking to on FaceTime was the most cinematic moment ever,” she said.

Their boyfriend tried to convince them that there was nothing wrong with dating more than one woman at a time, but neither of them bought it, Roberts said.

“After he left, we did some more research,” she said. “We found at least six women he’d been seeing.”

One of them was King, who had started dating him in 2018.

“Just two hours after he’d been confronted by Morgan and Abi and told them he was going to become a changed man, he was messaging me, asking to hang out,” said King, who works as a medical receptionist.

“I was as shocked as anyone to find out what he’d been up to,” she said.

It turned out, they said, he had talked with all three of them about a future together.

The three women agreed it was time to dump him, Tabor said.

The boyfriend, when reached by The Washington Post, said, “There are two sides to everything, but I think the best thing right now is to say nothing.”

He spoke briefly in a phone interview on the condition his name not be used.

“I really don’t want anything to do with them anymore,” he said of the three women.

The women also asked his name not be published, saying it was not their goal to shame him publicly or harm his reputation. Rather, they said, they wanted the focus to be on their bond instead of his betrayal.

The women provided text messages and social media posts to verify their account. It was also corroborated in an interview with one of their fathers.

Each of the women coped with their breakups by texting and FaceTiming each other for several months, Tabor said. Then, in January, they all decided to meet for a weekend at Roberts’s apartment.

“We did a lot of trauma processing and memory sharing, and it was obvious that we were all really cool, fun people who had a lot in common,” Roberts said. “Right away, we became good friends.”

“This guy had told each of us that it was his dream to pick up a VW bus and travel around the country in it,” she said. “We were sitting around laughing and talking about the van life that weekend, and pretty soon we thought, ‘Hey, we can do this.’ “

“We all had a free summer coming up, and I knew a guy who could sell me an old bus,” Tabor said.

“Since we’d all worked really hard and had saved some money, we decided, ‘Why not?’ ” King added.

So they pooled a few thousand dollars together, bought the bus and parked it at King’s parents’ place while they renovated it. King had experience helping her dad with construction projects around the house, she said.

“We watched a few YouTube videos, but a majority of it was pretty straightforward,” Tabor said. “Bekah’s dad and my dad helped us with the framing, but beyond that, we built the rest of it.”

The trio got together every weekend in Boise to fulfill their vision, she added.

“We took out the seats and flooring, painted the ceiling, put in new floors, siding and insulation and built bunk beds and a roof deck,” Tabor said.

In mid-June, a few days after the bus renovation was finished, the trio filled up the gas tank and headed out to Idaho’s Sawtooth Mountains, then on to Jackson, Wyo., and Grand Teton National Park.

They park their bus in campgrounds along the way at night and have a goal of ending up on a beach in California sometime this fall, King said.

“We take turns driving, and if we’re going downhill and have a good tail wind, we can hit 63 miles an hour,” she said.

She and her bus mates said they don’t want anyone to get the impression that their road trip is some kind of revenge tour.

“What this guy did to us doesn’t define our lives,” Roberts said. “We all feel really blessed that we found each other. We’re friends for life.” 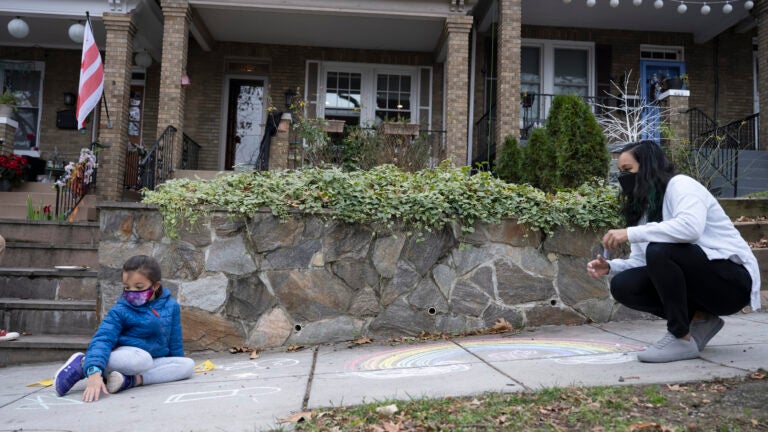 They were so careful, for so long. They got COVID anyway.