Jay-Z and Beyoncé were still in, as of Friday.

David Axelrod and Larry David were out.

Former President Barack Obama’s 60th birthday had been anticipated as the biggest social event of the summer for alumni of his administration and friends of the Obama family — a celebrity-studded garden party at Obama’s $12 million Martha’s Vineyard mansion.

But this week, some invitees were treated to a cold dose of reality when they were abruptly cut from the guest list. The party, the uninvited were told, had been scaled back because of growing concerns about the spread of the delta variant of the coronavirus.

Obama’s decision to cut back the reported 475-person guest list (a number Obama’s camp never officially confirmed) was made almost a week after President Joe Biden effectively conceded that the pandemic had come roaring back, and the Centers for Disease Control and Prevention said the delta variant was as contagious as chickenpox and more likely to break through vaccine protections than all other known versions of the virus.

But as masks were put back on in many cities and anxieties rose, details of Obama’s party continued to dribble out. Steven Spielberg was on the guest list, The New York Post reported, along with Bruce Springsteen and George Clooney.

Former administration officials said they were somewhat surprised Obama was carrying on with what appeared to be an over-the-top event, even though they said they were not concerned about catching the coronavirus while mingling outdoors with a mostly vaccinated crowd, all of whom had to submit negative tests to gain entry to the property.

On Tuesday night, Melissa Winter, chief of staff to Michelle Obama, was one of the people with the unlucky job of placing phone calls asking former colleagues not to come.

Oprah Winfrey and Ava DuVernay had pulled out of the party earlier because of concerns over the delta variant, according to two sources familiar with the party planning, letting the Obama camp off the hook of having to keep or cut them from the list. The White House had also said Biden was not going to come. 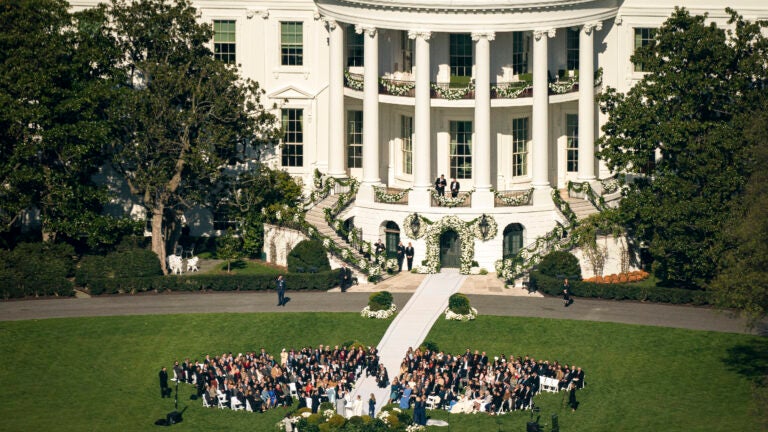 Naomi Biden, president’s granddaughter, is wed at the White House