But some who met with owner Gabriel Garcia this year have had their in-person consultations interrupted by loud beeping.

The noise may have required an embarrassing explanation: The sound was coming from a court-ordered GPS ankle monitor Garcia has had to wear since being charged with participating in the Jan. 6 Capitol riot.

Garcia is now asking a judge to order the removal of the device, saying it threatens his Miami-based business when it goes off in front of would-be clients. The beeping has been followed by an “embarrassing” phone call from officials with pretrial services asking for his exact location. It’s also dangerous, Garcia claims. He climbs ladders for work, and the monitor often gets stuck on the next rung. One time, he said he almost fell off.

Federal prosecutors oppose his request, though no hearing has been scheduled to consider the motion. Garcia’s lawyer, Charles Haskell, declined to comment on the request.

Garcia – who started Supreme Aluminum in 2017 and now oversees 14 employees – has repeatedly asked the court to get rid of his ankle monitor and curfew, court documents show. In May, the former Army captain told the court he wanted to operate his business 24 hours a day to pay for legal bills tied to his defense in the Capitol riot case, plus those associated with a divorce case. His wife of 15 years, with whom he has three minor children, had recently filed to end their marriage.

The court did away with the 10 p.m.-to-6 a.m. curfew but kept the ankle monitor requirement.

Business is good, according to Supreme Aluminum’s website. “Even though we’ve grown significantly over the year, we still keep a small-company focus with individual customer attention,” the company’s “About Us” page boasts.

Prosecutors have accused Garcia of aggressively confronting officers in the Capitol and inciting other rioters to charge and break through police lines.

Garcia recorded multiple live videos to his Facebook account on Jan. 6 that FBI agents used to make their case against him, according to court records. The first shows that he walked with a large group of people east on Constitution Avenue toward the Capitol building around 2 p.m. The second, uploaded about 20 minutes later, has him inside the building in the Crypt, a room filled with 40 columns that support the floor of the Rotunda above.

That 5½-minute video documents “an aggressive confrontation” with Capitol Police officers who were lined up to prevent rioters from advancing, an FBI agent wrote in a sworn affidavit. Five seconds into the video, Garcia turned the camera on himself and addressed his audience: “We just went ahead and stormed the Capitol. It’s about to get ugly,” he said as the crowd around him chanted, “Our house!”

Then Garcia moved from the back of the group, chanting “USA!” as he advanced to the very front, standing face-to-face with officers, the FBI agent wrote in the affidavit. As he did, a woman yelled, “You’re not on our side!” at police.

About 90 seconds into the video, a man tried to run through the line of officers, which pushed him back, according to the affidavit. Garcia responded by repeatedly calling the officers “traitors” and telling others to grab the man before police could secure him.

Then he addressed the officers directly: “You ain’t stopping a million. You ain’t gonna hold a million back today. Sorry. Ain’t holding a million of us.”

Garcia told members of the crowd to “storm” the wall of officers, which they eventually did, the affidavit says. After breaching the phalanx, Garcia went to the Rotunda, where he uploaded another video. About 35 seconds into it, he asked “Nancy,” referring to Speaker of the House Nancy Pelosi, to “come out and play.”

At the end of it, Garcia addressed the camera once more, telling the powers that be to “Free Enrique,” an apparent reference to Enrique Tarrio, the leader of the Proud Boys, a right-wing organization former president Donald Trump famously told to “stand back and stand by” during a presidential debate against then-candidate Joe Biden. Tarrio had been arrested in D.C. two days earlier.

Prosecutors believe Garcia is a member of the Proud Boys and that he, along with other members, took part in at least one additional “hostile demonstration” in D.C., before Jan. 6. 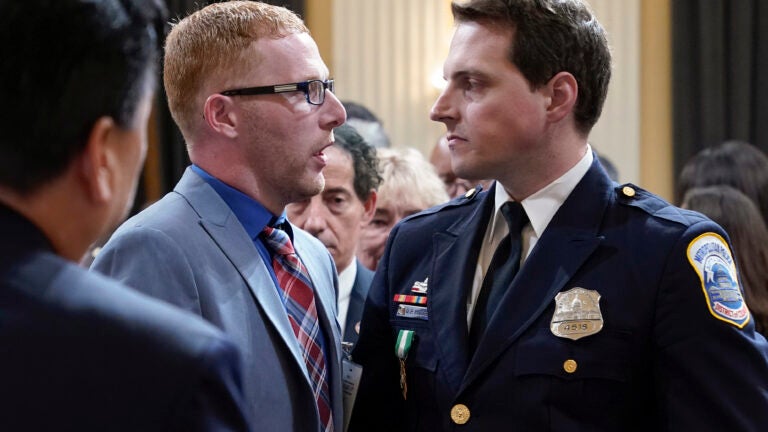