A 12-foot-long alligator suspected of attacking and killing a 71-year-old man in Hurricane Ida floodwaters has been captured with “human remains” found in its belly, officials said.

The alligator, weighing 504 pounds, was captured in the Avery Estates area of Slidell, close to where Timothy Satterlee Sr. was reported missing on Aug. 30, just a day after Ida wrought havoc on South Louisiana, the St. Tammany Parish Sheriff’s Office said in a statement on Monday.

Satterlee had been at his home in Slidell, about 35 miles northeast of New Orleans and close to Lake Pontchartrain, when the hurricane hit, causing devastating floods. He had waded out in knee-deep water to check on his shed, when his wife heard a noise and rushed out to find him being attacked by the reptile.

She fended off the gator, forcing the animal back into the water before returning inside to get first aid supplies. On realizing the severity of her husband’s injuries, however, and with no electricity or cellphone service, she decided to travel to higher ground by boat, about a mile away, to get help.

When she returned home her husband was gone, she told police.

After a two-week search, the alligator suspected of the attack was finally captured after U.S. Wildlife agents observed the large creature in a waterway near Satterlee’s residence, the sheriff’s office said. Licensed hunters set up traps to catch the animal.

It was eventually caught on Monday morning, euthanized and searched, which revealed “what appears to be human remains inside its stomach,” the sheriff’s office said. “Investigators will work with the St. Tammany Parish Coroner’s Office to verify those remains belong to Timothy Satterlee,” the statement added.

Satterlee’s residence is close to the Big Branch Marsh National Wildlife Refuge, whose marshes are often frequented by large alligators.

“The area is well-known to have alligators,” Captain Lance Vitter, a spokesperson for the sheriff’s office, previously told WWL, a local TV news station. “To lose a loved one is always a tragedy but in this manner it’s unthinkable,” he added.

Sheriff Randy Smith praised his officers’ persistence in the effort to track down the alligator, and offered his condolences to the Satterlee family.

“I know today’s findings does not bring their loved one back, but hopefully this can bring them some sort of closure,” he said.

Smith had previously warned residents “to be extra vigilant” in flooded areas as alligators and other animals get displaced, moving them closer to neighborhoods and homes.

Hurricane Ida brought winds of over 150 mph to the Mississippi River Delta in coastal Louisiana, knocking out power and triggering some of the country’s worst ever urban floods. The storm and its remnants have caused almost four dozen confirmed fatalities, the majority due to flooding in New Jersey, New York, Pennsylvania and Connecticut.

The American alligator is one of the largest reptiles in North America and the animals are “shrewd survivors,” according to the Louisiana Department of Wildlife and Fisheries, often learning the sound of boats and intruders to retreat swiftly underwater. However, unprovoked alligator attacks on humans remain extremely rare in the United States.

Louisiana and Florida have the largest alligator populations in the United States, according to the authority, with more than one million wild alligators present in each state. In Louisiana, they are mostly found in coastal marshes with mature males and non-breeding females preferring deep waters, while nesting females and hatchlings favor shallow marsh habitats. 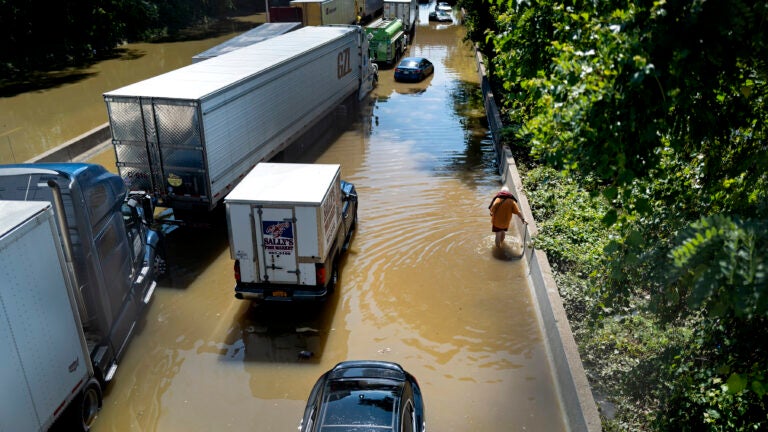