When Jimmy Hoffmeyer’s daughter came home from her Michigan elementary school with an uneven haircut earlier this year, he asked what had happened to the girl’s missing curls.

She told her dad that another girl on her bus had used a pair of school scissors to cut her hair without permission.

Hoffmeyer, who is Black, according to a lawsuit obtained by The Washington Post, took his daughter to get a new haircut in an effort to conceal the missing locks. But a couple of days later, the 7-year-old girl, who is also Black, returned home with nearly all of her hair cut off, court records state. The girl’s mother is White, MLive.com reported.

But this time, a fellow student was not involved, the girl told her father. Without permission, court records state, her librarian had cut almost all of her hair down to a couple of inches from her scalp. A teacher’s assistant either participated or failed to intervene, the lawsuit states.

Now, Hoffmeyer is suing both Ganiard Elementary teachers – along with their school district – for $1 million, according to the lawsuit filed in a federal court in Michigan. Hoffmeyer claims in the suit that Mount Pleasant Public Schools, about 90 miles outside of Grand Rapids, failed to properly train, monitor and discipline its employees. The teacher who allegedly cut the girl’s hair is White, the Associated Press reported.

“[The] Defendants harassed and discriminated against Plaintiff, by subjecting her to humiliation and discrimination to which others were not subjected, all because of her race,” the lawsuit states.

Three months after the incident, the district’s board of education announced it was placing the employee who cut the girl’s hair on a “last chance” agreement following the results of a third-party investigation. This meant the employee, who was not identified by the board, would likely face termination in the event of another violation, school officials said in a statement.

“We believe a last chance agreement is appropriate given that the employee has an outstanding record of conduct and has never once been reprimanded in more than 20 years of work at [Mount Pleasant Public Schools],” the statement added.

But Hoffmeyer’s lawyer said the incident and the school’s response is “unacceptable.”

“This matter is a serious one and should have been taken seriously by the school district,” attorney Shawndrica N. Simmons told The Washington Post in an email early Monday. “There was a disregard for the child and her father. . . . They are paid to teach not to be barbers for the day to shape a child’s hair in a way they deem acceptable.”

Neither the school principal nor the superintendent immediately responded to messages from The Post early Monday.

Hoffmeyer’s daughter returned home on March 24 with part of her hair missing after another student cut it on the school bus, the lawsuit states. Two days later, the school board later said in a statement, an employee cut the student’s hair without her parents’ permission.

“She was crying,” Hoffmeyer told the Associated Press. “She was afraid of getting in trouble for getting her hair cut.”

“I asked what happened and said ‘I thought I told you no child should ever cut your hair,'” he continued. “She said ‘but dad, it was the teacher.’ The teacher cut her hair to even it out.”

On July 2, the school board announced the results of a third-party investigation. The investigation, the board said, found the employee clearly violated policy by cutting the student’s hair on school property without the parents’ knowledge.

The investigation found “no evidence the incident was motivated by racial bias,” the board said.

Two other district employees, who also were not identified, were given written reprimands for being aware of the incident but failing to report it to the student’s parents or school administrators, the board said.

Although all employees involved have since apologized, Hoffmeyer’s daughter no longer attends that school, MLive.com reported.

Court records do not indicate the next hearing date for Hoffmeyer’s case. 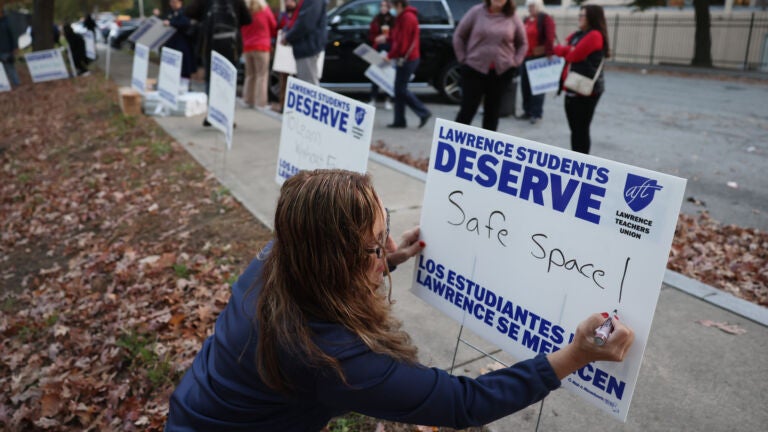