Brian Laundrie’s sister wants him to surrender to authorities – for the sake of their family.

Laundrie disappeared while authorities were searching for his missing fiancee, Gabby Petito, whose body was found Sept. 19. Laundrie is now wanted on fraud-related charges.

In an interview with ABC News that aired Tuesday on “Good Morning America,” Cassie Laundrie said she would like to see her brother turn himself in and for her parents to come forward if they know something that can “get us out of this horrible mess.”

Laundrie said she wishes her brother had come to her the day he arrived home without Petito, whose body was found in Wyoming days later.

Petito, 22, was reported missing after she and Brian Laundrie, 23, embarked on a cross-country van trip they documented on social media. Laundrie returned home to North Port, Fla., without Petito on Sept. 1 and disappeared several days after Petito’s family reported her missing.

Her body was found in Bridger-Teton National Forest on Sept. 19, and authorities said the manner of death was homicide.

A federal court in Wyoming issued an arrest warrant for Laundrie on fraud-related charges related to a credit card. He has not been charged in her death.

Petito’s case caught the attention of Internet sleuths who bolstered early intrigue in her case across the same social media platforms where the couple had posted updates about their trip. Her disappearance and death have rekindled conversations about disproportionate coverage of young White women in comparison with people of color who are missing without as much attention.

The case has also magnified law enforcement’s handling of domestic violence and how social media may not accurately portray a person’s life.

Days after Petito’s disappearance, social media dispatches of her relationship with Laundrie were juxtaposed with police footage of the couple from a traffic stop in Utah. In it, police mention that Petito is distraught and “crying uncontrollably”; she says that the couple’s travels had put a strain on their relationship and that Laundrie initially wouldn’t let her reenter the car.

The same day the two were stopped by police in Utah, a witness called 911 to report a “domestic problem” between a couple who matched the description of Petito and Laundrie. The caller noticed the couple fighting and said he saw the man slap the woman.

“It was pretty typical of them to argue and try and take space from each other,” Cassie Laundrie told ABC News. “But people saying they saw public domestic violence – I’ve never seen anything like that from either of them.”

Days after her brother returned home, Laundrie said, she didn’t pick up on anything suspicious. The family then went to Fort De Soto Park in Florida’s Pinellas County.

When her brother disappeared, Laundrie said, she immediately told investigators about the camping trip.

The last time she saw and spoke to her brother was Sept. 6.

“I don’t know if my parents are involved,” she said. “I think if they are, then they should come clean.”

Steven Bertolino, the Laundries’ attorney, told ABC News that Brian Laundrie’s parents do not know where he is, and he denied speculation that they helped him evade law enforcement.

Amid speculation that Brian Laundrie was seen on the Appalachian Trail over the weekend, Cassie Laundrie said her brother is a “mediocre survivalist” when it comes to living off the grid.

“I hope my brother is alive because I want answers just as much anyone else,” she said. 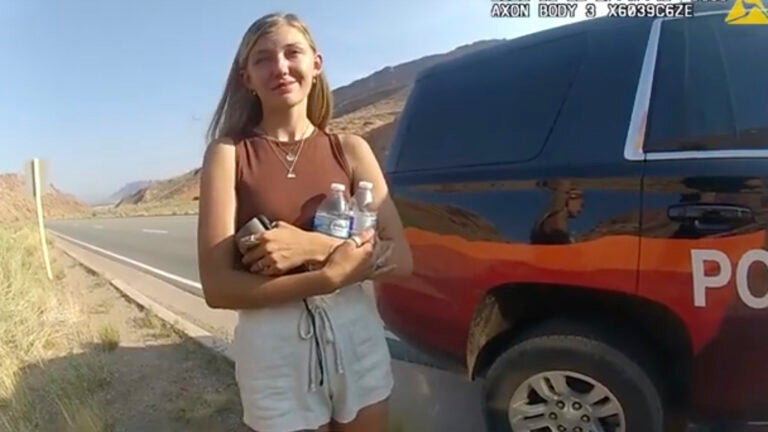 Coroner: Gabby Petito was strangled 3 to 4 weeks before her body was found