Defense attorney Kevin Gough raised eyebrows Thursday when he objected to “high-profile members of the African-American community” attending the murder trial in the killing of Ahmaud Arbery.

“We don’t want any more Black pastors coming in here … sitting with the victim’s family, trying to influence the jury in this case,” said Gough, who represents one of three White men who chased Arbery, a 25-year-old Black man, in coastal Georgia. He called the presence of the Rev. Al Sharpton “intimidating.”

On Friday, Gough apologized after a backlash — and Ben Crump, an attorney for Arbery’s father, declared that more Black religious leaders were on the way.

“We are going to bring 100 Black pastors to pray with the family next week,” he said in a statement, “and we welcome all those who want to show their support and add their prayers to ours.”

The dispute underscored parties’ fight over the role of race in this nationally watched case. The prosecution has suggested Arbery was racially profiled while jogging; the defense is arguing their clients had reasonable grounds to pursue Arbery in their trucks for a “citizen’s arrest” and then shot him in self-defense.

Friday marked the sixth day of witness testimony in the trial of Travis McMichael, his father Greg McMichael, and their neighbor William “Roddie” Bryan. The day closed out with a tense back-and-forth between Gough — who represents Bryan — and the Georgia Bureau of Investigation (GBI) agent who interviewed Bryan in May of 2020, as the defendant’s viral cellphone footage sparked demands for consequences in a case that went months with no arrests.

As Arbery’s killing fueled racial justice protests last year along with the killings of other Black people, defense lawyers sought to separate the court case from the public discussion of Arbery’s death and the broader movement it fueled. They questioned potential jurors about their participation in social justice demonstrations, and Gough unsuccessfully sought last month to limit activism outside the courthouse in Brunswick, Ga.

Jury selection put yet another spotlight on the case’s racial dynamics as the defense struck all but one Black juror from the final pool.

Then, this week, Gough told Judge Timothy Walmsley that he had a problem with Sharpton’s presence in the courtroom, which is highly restricted due to the coronavirus. Sharpton, a Black civil rights leader, said he attended Wednesday at the invitation of Arbery’s parents and also held a prayer vigil outside.

Walmsley dismissed Gough’s protests, saying he would not bar a respectful member of the public, and cut Gough off as the lawyer seemed to start a comparison: “If a bunch of folks came in here dressed like Colonel Sanders with white masks sitting in the back …”

Sharpton quickly fired back at Gough in a statement.

“The arrogant insensitivity of (Gough) in asking a judge to bar me or any minister of the family’s choice underscores the disregard for the value of the human life lost and the grieving of a family in need (of) spiritual and community support,” he said.

On Friday, Sharpton also announced plans to welcome more of the pastors Gough had qualms about, calling for “clergy across ecumenical lines” to join him, Arbery’s family, and their lawyers outside the courthouse next Thursday.

Gough soon offered his apologies “to anyone who might have inadvertently been offended.” He said in court Friday that if his statements earlier were “overly broad,” he would follow up with a more specific request putting his concerns in “proper context.”

Then court went on.

Jurors heard Friday from Glynn County police officer Robert Rash, who recounted trying to identify a man who entered an under-construction home several times in the months leading up to the shooting. The man was Arbery — and defense says surveillance footage of several nighttime visits bolstered their clients’ case for trying to apprehend Arbery on Feb. 23. 2020.

The prosecution contends the McMichaels and Bryans had no grounds to chase Arbery, only vague suspicions. Arbery was unarmed and was not found with any stolen items. Video shows him running past the McMichaels’s truck and then struggling with Travis McMichael, who fires a shotgun.

Not long before the shooting, Rash told the McMichaels that “nobody seems to know who this kid is” or “where he’s coming from.”

The owner of the under-construction home, Larry English, never saw Arbery take anything, Rash told the McMichaels. He was always “just in there plundering around,” Rash said.

The defendants’ citizen’s arrest argument could hinge on whether they reasonably suspected Arbery of intending to steal, because suspicions of a misdemeanor such as trespassing would not meet the legal bar for trying to apprehend someone.

Questioning GBI agent Jason Seacrist later, the prosecution drew attention to Bryan’s confusion about what exactly Arbery was doing prior to the shooting. Referencing a transcript, Seacrist testified that Bryan told him he joined the chase just to “see what was going on” and help.

“To be honest with you, I don’t know what I was doing,” Bryan said, according to the transcript. Bryan recounted a stolen trailer and some things that went missing from a relative’s truck but otherwise was not aware of specific incidents, Seacrist recounted. He also had not seen the videos from the unfinished home, the agent said.

Gough suggested in cross-examination that state authorities caught his client off-guard with criminal charges after enlisting his help reconstructing the chase. Emphasizing that his client struggled to remember some things by the time the GBI took the case, he pressed Seacrist on whether he guided Bryan through parts of an effort to physically retrace his path.

“So you took that as a green light to put words in (Bryan’s) mouth,” Gough said.

Gough has called his client a witness to the shooting, but prosecutors say he was a party to the killing and menaced Arbery with his truck. He faces the same charges as the McMichaels, including murder, aggravated assault, and false imprisonment.

Seacrist said that Bryan’s word choice when describing the chase “changed drastically” between his early statements to local police and his interviews later with the GBI, as the case drew new scrutiny.

“I’m sorry, did I ask you whether he changed his wording?” Gough shot back. 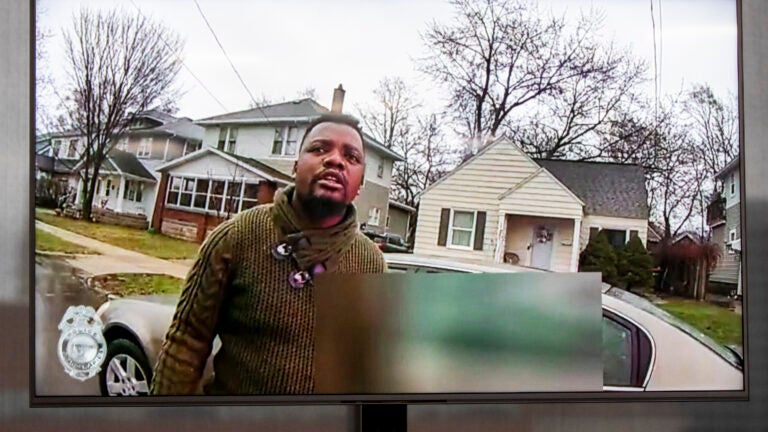