It took half a century to get a chance to say the words. Just “thank you.” That’s all.

For Jim Roberts, this desire had become a fixation, part of a years-long process of coming to terms with the darkness he’d seen as an Army lieutenant in the Vietnam War.

The women he wanted to thank were “Donut Dollies,” two among 600 women working with the American Red Cross who traveled to Vietnam to give a few hours of respite to troops longing for home, to play word games, or just sit and chat. A forced landing by a helicopter with mechanical problems brought the Dollies to the remote village where Roberts was a lonely and forlorn adviser to Vietnamese troops, along with two other soldiers.

The handful of hours he spent with the Dollies — a short walk, lunch, some small talk — had mostly faded from his memories. Even their names were lost to time. But that feeling they gave him lingered. A few moments of joy.

As the years have gone by, Roberts didn’t have much to go on in his quest to find those young women — only two photos he’d snapped in the remote village dozens of miles from Saigon in 1971. One young woman wore a ribbon in her hair. The other parted her hair in the middle and had a dimpled chin.

Their identities were the mystery of his life. Finding them and expressing his gratitude meant more to him as time passed — not less.

A few days ago, he finally got to say the words. His eyes welling with tears, Roberts saw for the first time in 50 years the faces of the women he’d met so long ago: Gwen Hejl Roussel and Karen Jankowski.

“What I’ve wanted to do all this time was just to say, ‘Thank you,’ ” Roberts, now a 75-year-old retired computer sciences professor who lives in a Pittsburgh suburb, told the Dollies via Zoom the other day.

He might have said more, but he couldn’t. He was too overcome with emotion to continue. He dabbed tears with a tissue.

What he learned over the next half-hour of conversation was that he wasn’t the only one with a need to express appreciation.

“Oh, Jim, thank you, thank you,” Hejl Roussel told him. “Fifty years later to hear you say, ‘Thank you,’ with such emotion — it’s so meaningful. I just feel like, ‘Wow. Wow. We made a difference.’ “

Moments later it was Jankowski who spoke: “It’s very humbling to have someone have a place in their heart for 50 years for someone that they don’t really know. It’s overwhelming. I really and truly am not a speechless person. But I’m speechless.”

The reunion was the culmination of years of searching. Roberts had shown the photos at a get-together of the Veterans Breakfast Club, a group that links former troops to talk about their experiences. He showed them to a well-connected Donut Dolly. He put them on the internet. He got nowhere.

Roberts and the two former Donut Dollies were finally brought together after an article was published in The Washington Post on Veterans Day detailing his quest to find them. The piece prompted hundreds of comments, emails, and phone calls. Former soldiers talked about their own special moments with Donut Dollies.

Within minutes of publication, Roberts’s obsession became the obsession of readers all around the country. Dozens of tips flowed in.

In Lincoln, Nebraska, a woman named Reesa Eisler got a phone call from a colleague in a church group that offers moral support to people going through difficult times. Months earlier, during a training session, each volunteer had been asked to tell the group something unique about themselves. Eisler told them she’d been a Donut Dolly in Vietnam.

“I look like the typical white-haired grandmother,” Eisler later said in an interview. “You wouldn’t think this is someone who would go halfway around the world to a war.”

Eisler pulled up the Post article her friend had called to alert her about, and recognized her long-lost friend Gwen in an instant. Her tip set The Post on a trail that led to Augusta, Georgia, where Hejl Roussel, now 74 and retired, lives in an interdenominational faith community

On the phone, she confirmed it. She was the Dolly with the ribbon in her hair.

Hejl Roussel then shared with The Post a letter welcoming her to Vietnam that she’d kept all these years. It was from a young woman named Karen Reeder. In it, Reeder had written she was from Lubbock, Texas. A final clue was provided by the American Red Cross, which dug up an old ID with a crucial new detail: Reeder’s middle initial, “K.”

The Post found a woman in Peachtree City, Georgia, named Karen K. Jankowski. She confirmed it: She was the Dolly with the dimpled chin.

In interviews, both Hejl Roussel and Jankowski talked about coming from military families — Hejl Roussel’s father was in the Army Air Corps in World War II. Both her parents worked at a military base in Georgia.

Jankowski’s father was in the Air Force and had served two years in Vietnam. She’d grown up on military bases around the world.

In the early 1970s, both wanted an adventure. Hejl Roussel, then 24 years old, hadn’t even traveled outside the United States. Both young women went to Vietnam over their fathers’ objections. They were joining an American Red Cross group that took its name from the Donut Dollies of World War II — a name given to them because they made doughnuts for the troops. The Vietnam War-era Dollies didn’t make doughnuts, but the old name had stuck.

Hejl Roussel had recently graduated from the University of Georgia with a degree in psychotherapy but hadn’t settled on a career path. She remembers having a bit of a “savior complex” in those days.

“I needed to go out and do something,” she said.

Jankowski remembers how the “hippies and everybody were against the war. I wanted to see for myself what it was.”

They arrived in Vietnam at what Jankowski calls a “fragile time.” The war was dragging on with no clear victory in sight. Frustrations were boiling over. She witnessed anger and despair. They were meeting young men — some of them might better have been described as boys — with wounds not just to their bodies, but to their psyches.

Their jobs were to make some of that disappear for a few hours. Jankowski, then 22, got there first. She was based in Da Nang in central Vietnam, with periodic stays to the north to Quang Tri. Hejl Roussel arrived in 1971, and was sent south to a base in the Mekong Delta.

Nearly every day, they jumped on helicopters. The choppers often touched down in firebases, where the soldiers were isolated and weary. Once, Hejl Roussel remembers, a fellow Dolly dangling her legs from the side of a helicopter for a while before settling inside. When they landed, there were bullet holes where her colleague’s legs had been moments earlier. (Three Dollies died in Vietnam.)

They traveled in pairs, wearing blue uniforms, and hauling games and other materials in big black bags. They’d meet with dozens of soldiers at a time. Hejl Roussel remembers many of the soldiers being “shy” at first, unsure what to make of these young women who descended from the sky.

Soldiers later would send letters to Jankowski. Some asked for dates. One said he considered her a “sister” in his family.

She would read about their broken lives: “My wife and I are no longer together, it’s what she wanted. She found another fellow and loves him and is having (a) child.”

As it had with Roberts, a few hours with the Dollies had whittled into them. It had been more than a casual conversation — it was a lifeline.

And yet talk to former Dollies and eventually they’ll tell you something like what Hejl Roussel said to The Post in an interview: “I was the one that was grateful. I received so much more than I could have been given.”

After returning to the United States, Jankowski married a helicopter pilot she’d met in Vietnam. She later divorced and is now remarried, and works as an independent court reporter.

Hejl Roussel, the Macon, Georgia, girl who never spent a day abroad until the war, went traveling. She and a few fellow Dollies took the Trans-Siberian railroad across the then-Soviet Union to Moscow. When she came back to the States she eventually rejoined the American Red Cross, working in the Northeastern United States and in South Korea as a liaison between the military and families. She later married and was a homemaker in New Orleans. After divorcing she moved back to Georgia and worked 14 years administering workers’ compensation claims for the state.

They’d gone on with their lives. Then Jim Roberts came along.

When Hejl Roussel and Jankowski were contacted by The Post they were puzzled at first. But once they heard more about Roberts’s years-long search, they were eager to meet him.

On the Zoom meeting arranged by The Post, Roberts — with his wife of five decades, Linda, by his side in a book-lined room — wanted to know whether the former Dollies could fill in some of the blanks in his memory. Their recollection of the visit was even more scant than his. Jankowski remembers once riding in a helicopter that experienced mechanical problems and “fell out of the sky.” Maybe that was it. She can’t be sure. But it fit Roberts’s recollection that the women were left at his base while the helicopter returned to base to address a mechanical issue.

In such a small group, Jankowski cracked, “we were probably a little flirty.”

Hejl Roussel has a vague recollection of that day, because it was unusual to meet with only a few soldiers. Over the years, Jankowski, now 73, told Roberts, she’d sometimes felt guilty about her time in Vietnam. The Dollies were almost like “celebrities,” she said in the Zoom meeting, “because there are so many people who want to be in your life for that moment.”

She tried to give all the soldiers the attention they craved. But she’s often felt it wasn’t enough. “So after 50 years to have someone say to me that they touched them,” Jankowski told Roberts, “it makes you feel less guilty.”

For Hejl Roussel, meeting this man she affected so much so long ago, felt like a “God moment — that moment in time that was unexpected for all of us.”

The Zoom meeting was about to expire, but each of them — the Dollies and the soldier — wanted one last thing: each other’s contact information. They had so much more to say to each other.

The Washington Post’s Alice Crites contributed to this story. 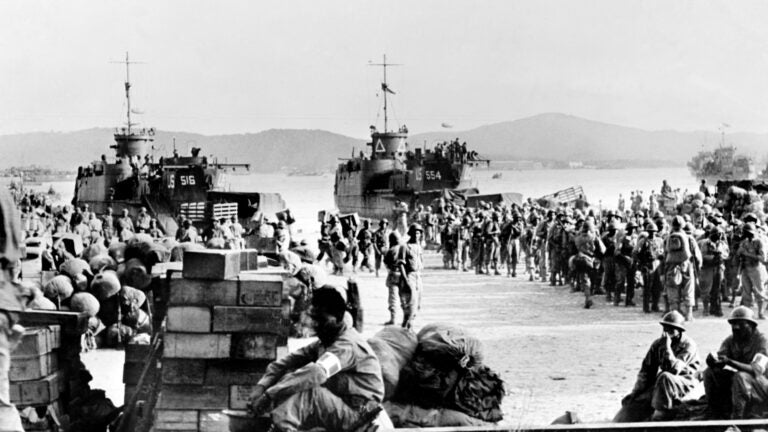