A 26-year-old man survived a flight from Guatemala to Miami on Saturday after hiding in the airplane’s landing gear compartment, officials said.

American Airlines Flight 1182 from Guatemala City landed at Miami International Airport just after 10 a.m. Saturday, according to Alfredo Garduño, a spokesman for the airline.

Once the plane landed, it “was met by law enforcement due to a security issue,” Garduño said in a statement. The airline was working with law enforcement agencies, he said, declining further comment.

U.S. Customs and Border Protection said its agents had taken into custody a man “who attempted to evade detection in the landing gear compartment of an aircraft” that arrived in Miami from Guatemala on Saturday morning. The man, whose name was not released, was taken to a hospital for a medical assessment, the agency said.

“Persons are taking extreme risks when they try to conceal themselves in confined spaces such as an aircraft,” the agency said in a statement. “This incident remains under investigation.”

The Miami-Dade Police Department, which has a station at the airport, did not immediately respond to requests for comment Sunday.

A 25-second video posted on Instagram on Saturday shows a man standing on the tarmac a few feet from the wheels of a plane. Two other men in yellow vests, one of which says “American” on the back, are next to him. The first man, wearing an unzipped jacket, jeans and black boots, appears dizzy and sits down on the ground. The video then moves toward the plane and shows a small compartment inside the plane where the wheels and landing gear had been tucked for the duration of the flight.

Dan Vazquez, who shared the video on the Instagram account Only in Dade, said it was submitted by a worker at the airport who wanted to remain anonymous. Another video on the account shows the man sitting on the tarmac and receiving water from airport workers.

In a statement, the Federal Aviation Administration said that as of Feb. 1, 129 people had attempted to stow away “in the wheel wells or other areas of commercial aircraft” throughout the world since 1947. Of those, 100 “died of injuries or exposure during the flight,” the agency said.

In 2014, a 15-year-old boy survived a 5 1/2-hour flight from San Jose, California, to Maui, Hawaii, after he apparently spent most of the flight unconscious in the freezing, low-oxygen wheel storage compartment.

In 2019, the body of a man believed to have fallen from the landing-gear compartment of a Kenya Airways flight to Heathrow Airport from Nairobi, Kenya, landed in the backyard of a house in the Clapham area of southwestern London, narrowly missing a sunbather. 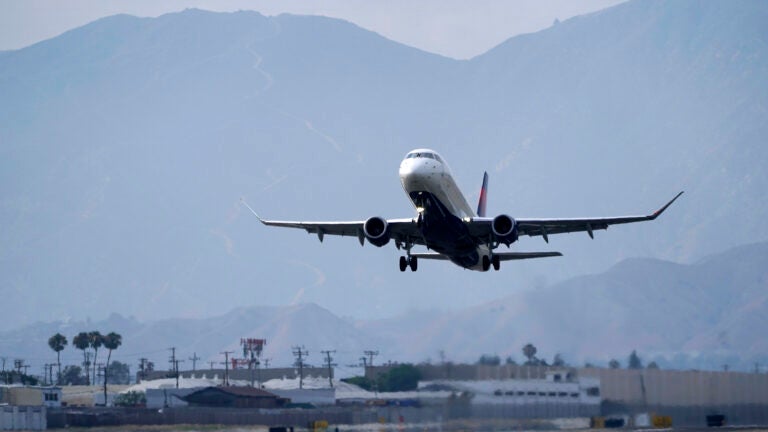 Passenger pulled down pants, threw can during flight, prosecutors say