JACKSON, Miss. — The patients that morning included a teenager accompanied by her mother, an employee from a nearby hospital wearing scrubs, a college student in a sorority T-shirt, and a woman who had left home well before sunrise for the seven-hour trip from Texas.

They had all come seeking an abortion from the last clinic operating in Mississippi.

Waiting for them was Dr. Cheryl Hamlin, an obstetrician-gynecologist from Massachusetts, part of a rotation of out-of-state doctors who do the work that local physicians will not.

“I am required by the state of Mississippi to tell you,” Hamlin said, “that having an abortion will increase your risk of breast cancer.”

“It doesn’t,” she added without hesitation. “Nobody thinks it does. The American College of OB-GYNs doesn’t think it does.”

The clinic, Jackson Women’s Health Organization, has long negotiated measures intended by the Legislature to discourage women from obtaining abortions and to make it difficult for providers to operate. They include the requirement that doctors warn patients about a link between breast cancer and abortion, though the American Cancer Society says “scientific evidence does not support the notion.”

Now the culmination of those legislative efforts — a state law banning abortion after 15 weeks of pregnancy — has thrust the clinic into the center of a case that may lead to one of the most consequential rulings on abortion rights in decades.

Jackson Women’s Health Organization sued Mississippi over the new restrictions, and lawyers will argue the case before the Supreme Court on Wednesday. The implications will most likely be felt far beyond Jackson. The law was conceived as a direct challenge to Roe v. Wade, which established a constitutional right to abortion and blocks states from banning the procedure before fetal viability, which most experts estimate at about 23 or 24 weeks.

The law, which includes exceptions for medical emergencies or severe fetal abnormalities, reflected the efforts of the state’s leaders to make “Mississippi the safest place in America for an unborn child,” Phil Bryant, the former Republican governor, said as he signed the legislation in 2018.

If the justices overturn Roe completely, the ruling will trigger laws in about a dozen states — including Mississippi — that will make abortion unlawful almost immediately. Even if Roe is not overturned entirely, the court could give states greater latitude to limit how and when abortions are performed.

Although the Jackson clinic’s survival hangs in the balance, it has never been busier. In recent months, it has expanded its hours of operation from three days a week to five. The phone rings constantly with people trying to make appointments, calling from across Mississippi and more and more from Texas — an influx attributed to the new law there that is the most restrictive in the country. The clinic now sees about 300 women a month.

“Our patient load has almost doubled,” said Shannon Brewer, the clinic’s director. “We are adjusting,” she added. “We just know it’s got to be done.”

The weight of the ruling’s implications has been inescapable. In recent weeks, camera crews have crowded into Brewer’s office. A Time magazine cover featured a photograph of her staring forlornly into the distance.

But taking the time to ruminate on all of that feels like a luxury. “By the time I get home and get situated, I go to sleep,” Brewer said. “I’m not sitting up thinking about it.”

Hamlin, who travels to Mississippi about once a month, arrived at the clinic around 8 a.m. on a recent Monday with 2 1/2 packed days ahead of her.

The morning started with state-mandated counseling sessions that begin a 24-hour countdown before patients are allowed to complete the abortion process. About a half-dozen women at a time sat in a back room as Hamlin gave an overview that vividly illustrated the clash between Mississippi’s legal requirements and her professional opinion.

“There are many laws restricting the care that we can provide here,” Hamlin said. “I’d encourage you all — if this is an issue important to you — to vote in any upcoming elections.”

The women then lined up to talk with her individually. They came from all walks of life but mostly reflected the demographics of Jackson, which has a largely African American population, and Mississippi, one of the poorest states in the country.

As one patient sat across from the desk, Hamlin flipped through a folder with a copy of her sonogram and her medical information. Her blood pressure was somewhat high, she noted.

“It could just be that you’re nervous, too,” Hamlin said.

The woman needed a surgical abortion. Hamlin looked over a calendar. Her only option was to come back the next day or wait another week, which would leave her with a narrow window. The 15-week restriction has been stayed pending a court ruling, but the clinic, restricted by a multitude of other state laws, performs abortions only up to 16 weeks.

“I would like to come tomorrow,” the woman replied, “but I want to make sure I have all the money.”

Surgical procedures range from $650 to $800. Medication abortions cost $600. Patients must pay in cash or by credit card, but some financial assistance is available.

“Why don’t I put you down for tomorrow?” Hamlin said. “And if for some reason you feel like you can’t make it, just let us know.”

“Because clearly,” she added, “the sooner the better.”

The clinic, known as the Pink House for the flamingo shade of its stucco exterior, is situated in the lively Fondren neighborhood of Jackson, a small arts district with boutiques, coffee shops and trendy restaurants.

It predates the neighborhood’s upswing and has made for a sometimes awkward neighbor. Demonstrators for and against abortion regularly face off outside, often at high volume.

The entrance to the clinic is blocked by a fence covered with black paneling to protect patients’ privacy. On this day, a demonstrator walked along the exterior as women went inside: “You’re already a mama and daddy to the baby!” she yelled. “Let us help you! You’re paying someone to kill your baby!”

Derenda Hancock, who leads the Pink House defenders, as the volunteers who escort women in and out of the clinic are known, apologized to a patient on the other side of the fence.

Just outside the fence, Pam Miller, an anti-abortion protester, waved as cars came and went, trying to hand the women gift bags with Cheez-It crackers, squeeze pouches of apple sauce and a pamphlet about reversing the effects of the first part of a medication abortion, a practice touted by anti-abortion groups but viewed by many researchers as based on dubious science.

“To me, it is a biblical issue,” Miller said, “because God created people in his image and that means we’re special, we’re of intrinsic worth just for being.”

Hamlin had planned to become a veterinarian, but a college guidance counselor nudged her toward medical school. In her first year, she shadowed a doctor who let her watch as a woman gave birth.

“I just thought it was the most miraculous thing I’ve ever seen in my life,” she recalled. “I cried.”

She decided to become an OB-GYN. “I just felt like the doctors were so paternalistic,” said Hamlin, who finished her residency in 1992.

In the fall of 2016, Hamlin, a hospital physician in the Boston area, found herself unsettled by Donald Trump’s election. She realized there was a large chunk of the country she did not understand. She signed up to work at the clinic in Jackson and another in Alabama.

During a typical day in Jackson, she sees more than a dozen patients, and most of her counseling sessions last just a few minutes.

“This is your first pregnancy?” Hamlin asked one patient, scanning her chart. “Looks like you’re healthy. Your blood pressure is good. Blood count is good. All right, anything else?”

Afternoons are devoted to surgical procedures and group sessions in which she dispenses pills for medication abortions and instructs women on the process.

From her desk, Brewer, the clinic director, watches a screen showing the view of security cameras posted around the clinic, alert for signs of trouble. There have been threats, and confrontations have erupted outside.

“I’m a very cautious person because of this place,” said Brewer, the director for 11 years and an employee for 20.

Jackson is a city of roughly 154,000 people that can feel like a small town, which is especially true for the people who work at the clinic. Brewer used to live down the street from one regular protester. She occasionally sees others in the grocery store. “They usually seem more startled when they see me out away from this place,” she said.

After the last patient left that day, Hamlin worked her way through a pile of folders on her desk, reviewing charts and signing paperwork.

The clinic has not had a staff doctor in more than a decade. Local physicians, whether because of moral opposition or safety concerns, have declined to do such work. Instead, the clinic maintains a house to host doctors from out of state. Hamlin keeps a pair of running shoes and some clothes there, but her connection to the city is limited. Her job is not without risk, but unlike other women working at the clinic she knows she can return to Massachusetts after each short trip. 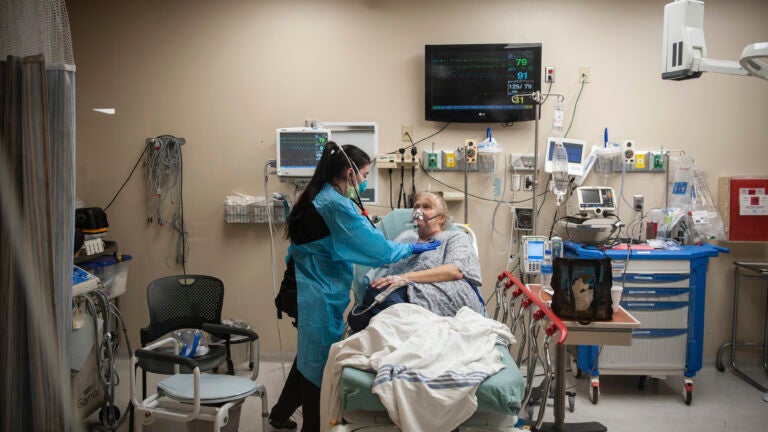 E.R. doctor says omicron surge is making it ‘nearly impossible’ to provide the ‘right care’ at the right time