The parents of a 15-year-old boy accused of fatally shooting four classmates at a Michigan high school were ordered held Saturday on $500,000 bond each, hours after they were found hiding in a commercial building in Detroit and taken into custody.

Jennifer and James Crumbley each pleaded not guilty to four counts of involuntary manslaughter, appearing separately via webcam at a 35-minute virtual arraignment in which the prosecution and defense clashed over whether the parents had provided easy access to the semiautomatic handgun authorities say was used in the crime.

“This is a serious, horrible, terrible shooting, and this has affected the entire community,” Oakland County Prosecutor Karen McDonald said, adding that the likelihood of conviction is “strong.” “And these two individuals could have stopped it.”

The arraignment capped a stunning series of events in the aftermath of Tuesday’s shooting, which left Tate Myre, 16, Madisyn Baldwin, 17, Hana St. Juliana, 14, and Justin Shilling, 17, dead, and ignited a debate about gun laws and whether parents should be held accountable when their child commits an egregious act of violence.

Prosecutors allege that the parents bought the gun for their son, and that Jennifer Crumbley boasted on social media about taking her son to a shooting range to try it out. Authorities also say 15-year-old Ethan Crumbley’s parents left the gun unlocked and neglected to act on concerns expressed by school officials that he might act violently.

Hours after announcing that the pair was being charged — an extraordinarily rare move — police officials said that the couple had gone missing. They were located overnight in a commercial building after an extensive search involving police dogs, local law enforcement, and the U.S. Marshals Service, authorities said.

Jennifer Crumbley fought back tears when asked by the judge if she understood the charges she is facing while her husband shook his head as McDonald recounted some of the accusations, including that the parents had provided “total access” to the weapon. Their defense attorneys, Shannon Smith and Mariell Lehman, denied that allegation and said the pair had always planned to cooperate with the investigation.

“This case is absolutely the saddest, most tragic, worst case imaginable, there’s no doubt,” Smith said. “But our clients were absolutely going to turn themselves in.”

Oakland County Judge Julie A. Nicholson agreed with the prosecution’s request for a $500,000 bond, stating that the couple could pose a flight risk, and ordering parents to hand over all weapons to the sheriff’s office if they are released from jail.

“Obviously, these charges are very, very serious, there is no question about that,” Nicholson said. “The court does have some concern about the flight risk along with the public safety, given the circumstances that occurred yesterday and the fact that the defendants did have to be apprehended in order to appear for purposes of arraignment.”

Ethan Crumbley faces multiple charges as an adult in the attack Tuesday at Oxford High School: one count of terrorism causing death, four counts of first-degree murder, seven counts of assault with intent to murder, and 12 counts of possession of a firearm.

The shooting has torn apart the small Michigan community, located about 45 minutes outside Detroit, and reignited calls for tighter gun laws, with more states considering laws to punish parents if children fire unsecured guns. It appears to be the deadliest episode of on-campus violence in the United States in more than 18 months. Seven others were wounded.

Charging parents is unusual in a school shooting. A Washington Post review of 145 school shootings committed by children in the two decades after the Columbine High massacre in 1999 found that the weapon’s source had been publicly identified in 105 cases. In total, the guns those children used were taken from their own homes or those of relatives or friends 80% of the time.

However, in just four instances did the adult owners of the weapons face any criminal punishment for not having locked them up — and none of those prosecutions stemmed from negligent-storage laws.

Experts say it is difficult to charge parents in connection with school shootings in part because it can be challenging to show they displayed a disregard for human life and could foresee their child committing an act of violence.

“That’s why these charges are so rare,” said Eve Brensike Primus, a law professor at the University of Michigan who focuses on criminal procedure.

Jennifer and James Crumbley were located after a 911 call from a business owner who spotted the couple’s car in his parking lot in Detroit, Chief Deputy Mike McCabe of the Oakland County Sheriff’s Office. A female observed near the car fled on foot when he called 911, McCabe said. Police found a video of one of the “two fugitives” entering the building, Detroit Police Chief James White said, and police quickly established a perimeter at the location.

The pair “did not break in” at the building but “were aided,” White said, adding that police were investigating one other person who may have helped the couple. He thanked the community, saying that “it was a tip that led us to this location” and that officers responded “in a matter of minutes,” arriving on scene at 10:30 p.m. local time Friday.

Detroit Police Department spokesman Rudy Harper described the building where the couple was found as a commercial space “with several art studios from what we saw.”

When asked about the pair’s emotional state as they were taken into custody, White said that they were “very distressed” and that one of them left the scene with head bowed.

Attorneys for the Crumbleys had earlier said the couple left town the night of the shooting “for their own safety,” adding that they would return to be arraigned on the manslaughter charges. They repeated that at the arraignment Saturday, saying that the couple had planned to meet their attorneys outside the court at 7:30 a.m.

“We did not announce it because unlike prosecution we weren’t attempting to make this a media spectacle,” Smith said.

But police and prosecutors disputed that account, with White telling reporters Saturday: “This isn’t indicative of turning themselves in, hiding in a warehouse.”

The pistol, purchased by James Crumbley on Nov. 26, was stored in an unlocked drawer in the parents’ bedroom, according to officials.

A day before the fatal shooting, a teacher noticed Ethan Crumbley using his cellphone to search for information on firearm ammunition. Jennifer Crumbley did not respond when the school contacted her via voice mail about her son’s “inappropriate” search, McDonald said. Instead, she exchanged a text message with her son that read, “LOL I’m not mad at you. You have to learn not to get caught.”

On the morning of the shooting, both parents were summoned to a meeting by school administrators after a teacher found a troubling note in their son’s desk, McDonald said. It contained a drawing of a semiautomatic handgun pointing at the words “The thoughts won’t stop. Help me.”

Ethan altered the note, McDonald said, scratching out the most disturbing parts of it by the time the meeting with his parents began shortly after 10 a.m. on Nov. 30. McDonald said the teen brought his backpack to the counselor’s office for the meeting and noted that at no point did his parents ask about the recently purchased gun. McDonald said neither the Crumbleys nor school officials searched the teen’s backpack.

The Crumbleys “resisted the idea of their son leaving the school at that time,” McDonald said. Instead, Ethan returned to class with his backpack.

At Saturday’s arraignment, the couple’s defense attorneys described them as law-abiding homeowners, though Jennifer Crumbley’s lawyer noted she was convicted of drunken driving during college. Her attorney said she has worked as a director at a marketing company. Her husband’s lawyer said he is diabetic and requires insulin.

“Our clients are just as devastated as everyone else,” Smith said. 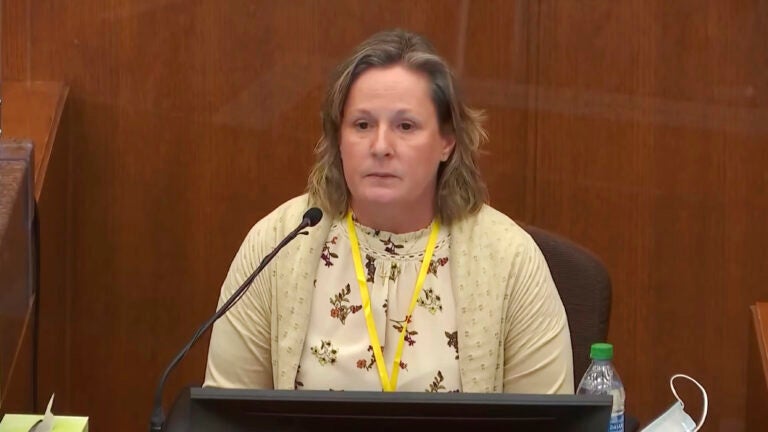