WASHINGTON — Courtney Grund, whose husband died of COVID-19 in August, got an alarming text message last week: Her 16-year-old son was “talking about self-harm,” according to the message, sent by his friend. She quickly signed him up for grief counseling, she said in a tearful interview, using her maiden name to protect his privacy.

John Jackson, a disabled veteran on a fixed income, said he had struggled to find help for his 14-year-old daughter, whose mother died in the pandemic. “I can see it in her, where she’s suffering,” he said.

Pamela Addison, a reading teacher whose husband died, said she felt fortunate that she could afford therapy — $200 a session out of pocket — for her grieving 3-year-old.

Although Congress has allocated trillions of dollars to combat the pandemic, including more than $100 million for existing children’s mental health programs and $122 billion for schools, the Biden administration and lawmakers have not yet created initiatives specifically for the tens of thousands of children who have lost parents and primary caregivers to COVID-19.

Behind the scenes, leaders of a bipartisan coalition of experts in education, the economy and health — backed by wealthy philanthropies and headed by two former governors, Dirk Kempthorne of Idaho, a Republican, and Deval Patrick of Massachusetts, a Democrat — have been meeting with White House officials, urging them to do more.

On Thursday — just two days after the surgeon general warned that young people were facing “devastating” mental health issues related to the pandemic — that group, the COVID Collaborative, will release a report estimating that more than 167,000 children in the United States have lost parents or in-home caregivers to the disease.

The collaborative is asking President Joe Biden to initiate a national campaign to identify these children and, with help from the private sector, take steps to improve their emotional and economic well-being. Its recommendations include offering them mental health care and creating a “COVID Bereaved Children’s Fund,” similar to a fund established after the Sept. 11 attacks, to provide up to $10,000 to families in need.

“The president is uniquely positioned to put an official imprimatur on the call in this report to coordinate all resources, public and private, at every level of government and every level of the private sector and philanthropy to help these children,” Patrick said in an interview.

“It’s a tragedy not of their making,” he added, “but they’re our kids. They belong to us, and all we are saying is, ‘Let’s act like it.’”

The report, titled “Hidden Pain,” estimates that more than 70% of the bereaved children are 13 or younger. It is based on federal data and a modeling study led by Dan Treglia, a social policy researcher at the University of Pennsylvania.

Communities of color are disproportionately affected. Treglia, who is also part of the collaborative, said racial and ethnic disparities in caregiver loss from COVID-19 exceeded the already stark disparities in coronavirus deaths.

Parents and young people left behind said the push by the COVID Collaborative was welcome news, if only to force officials in Washington to recognize this new cohort of bereaved children.

Grund picked up her son from school last week after she got the text from his friend; he has not yet returned.

He went to his first group therapy session Tuesday evening. In an interview, he said he was having mood swings and suicidal thoughts, and had not wanted to leave his room. He would like to see initiatives that better equip teachers and school officials to help grieving students.

“No one knew how to deal with what I was going through, so it was hard for the teachers to communicate to me,” he said, adding that while he could talk to his friends, it had not helped much. “I can share with them, but it’s in one ear and out the other,” he said. “They don’t completely understand and, like, process the whole situation.”

A spokeswoman for the Department of Health and Human Services, Kirsten Allen, said the administration “has made a number of investments and launched several initiatives covering a wide range of mental health priorities — including support for children who have lost parents.”

She cited the surgeon general’s advisory and the expansion of several existing programs. In May, for example, the department announced it was releasing $14.2 million, allocated by Congress through the American Rescue Plan, to expand access to pediatric mental health care. The rescue plan also provided money for suicide prevention programs and a program to improve care and access to services for “traumatized children.”

John Bridgeland, the collaborative’s founder and chief executive officer, said expanding existing programs was not enough. “We need a focused effort to help the unbearable loss of these 167,000 children,” he said.

Losing a parent or a caregiver is hard for a child in ordinary times. But experts in grief counseling and school officials say the pandemic has exacted a particular toll.

“The death of a parent is something that we deal with all the time — not just with COVID,” said Susan Gezon Morgan, a school nurse in Emmett, Idaho, a small city outside Boise. “But I think the fact that COVID is in the news and so sudden, and oftentimes it’s a young parent, that it seems so much more traumatizing.”

In a small community like Emmett, where everyone knows everyone else, Morgan said, the grief cuts both ways. Grieving children lose their privacy, but they also have a tight-knit community to provide support. In big cities, it is another story.

Jackson, of Reisterstown, Maryland, just outside Baltimore, is home-schooling his daughter, Akeerah, in part because he fears her peers will be insensitive, encouraging her to “just get over” her loss.

When Akeerah’s mother, Cathy Fulcher, died, Jackson got a note from the Baltimore County school system saying she could delay turning in her grades, but little in the way of guidance. Soon afterward, he said, he started looking for a place for his daughter to get therapy.

“One was $250; they didn’t take any type of insurance,” he said. “That was just for us to come in for an evaluation. That’s just not in the budget.”

Eventually he found Roberta’s House, a grief support center for Baltimore families. There, Akeerah said, she has learned how to cope with her grief by drawing and writing in a journal, and she is now a “peer ambassador,” leading sessions for other teens. She has also attended Camp Erin, a free camp for grieving children offered in cities across the country.

Both are funded by the New York Life Foundation, which also backs the COVID Collaborative and has created a website, grievingstudents.org, to provide information for educators as part of its “grief-sensitive schools” initiative, which predates the pandemic. The vice president of the foundation, Maria Collins, says many of its programs have waiting lists.

“It’s known in this field that the young person is the forgotten griever,” she said, adding that the foundation was open to working with the federal government and would be “eager to provide tangible support, financial and otherwise, for COVID-bereaved children.”

The collaborative envisions $2 billion to $3 billion for the bereavement fund, possibly supplemented by money from private foundations. It would help parents struggling with everything from rent payments to their children’s academic performance to finding the right therapy at a reasonable cost.

The report builds on similar research: The journal Pediatrics, relying on data through June 30, before the wave of infections caused by the delta variant, reported in October that more than 120,000 American children had lost parents or caregivers from COVID-19.

The researchers who conducted the collaborative’s study found that Black and Hispanic children were roughly 2 1/2 times as likely as whites to be bereaved as a result of the pandemic, while Native American children were nearly four times as likely. Treglia, whose research focuses on vulnerable populations, said the number of bereaved children grew quickly during the Delta surge in part because it hit so many adults of childbearing age.

“There is an extraordinary responsibility to care for those children,” he said. “So many of them were facing economic and other hardships even before the pandemic began, and certainly before they lost a caregiver. Now they are facing their darkest days.”

Some parents whose spouses were frontline workers say they would like at least some recognition from Washington that their loved ones died while trying to protect others.

Addison, whose husband was a hospital speech pathologist in Paterson, New Jersey, runs a support group called Young Widows and Widowers of COVID-19. She estimates that 95% of her 900 members have children.

“You invite athletes to the White House because they’ve won a championship; why not invite families who lost their loved one because they went into a hospital, they went into a school that wasn’t really safe?” she said. “You see when a military person dies there is this big celebration of their life and the kids know their parent is a hero. Our kids need that.” 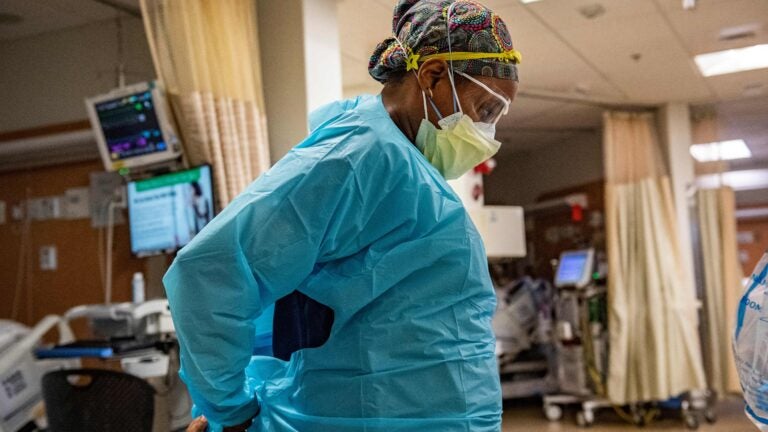