SpaceX will be getting to the moon a bit more than a month from now, far earlier than expected.

But it is all by accident, and it will cause a bit of a mess.

SpaceX, the rocket company started by Elon Musk, has been selected by NASA to provide the spaceship that will take its astronauts back to the surface of the moon. That is still years away.

Instead, it is the 4-ton upper stage of a SpaceX rocket launched seven years ago that is to crash into the moon March 4, based on recent observations and calculations by amateur astronomers.

Impact is predicted for 7:25 a.m. Eastern time, and while there is still some uncertainty in the exact time and place, the rocket piece is not going to miss the moon, said Bill Gray, developer of Project Pluto, a suite of astronomical software used to calculate the orbits of asteroids and comets.

“It is quite certain it’s going to hit, and it will hit within a few minutes of when it was predicted and probably within a few kilometers,” Gray said.

Since the beginning of the Space Age, various human-made artifacts have headed off into the solar system, not necessarily expected to be seen again. That includes Musk’s Tesla Roadster, which was sent on the first launch of SpaceX’s Falcon Heavy rocket in 2018 to an orbit passing Mars. But sometimes they come back around, like in 2020 when a newly discovered mystery object turned out to be part of a rocket launched in 1966 during NASA’s Surveyor missions to the moon.

Gray has for years followed this particular piece of SpaceX detritus, which helped launch the Deep Space Climate Observatory for the National Oceanic and the Atmospheric Administration on Feb. 11, 2015.

That observatory, also known by the shortened name DSCOVR, was headed to a spot about 1 million miles from Earth where it can provide early warning of potentially destructive eruptions of energetic particles from the sun.

DSCOVR was originally called Triana, an Earth observation mission championed by Al Gore when he was vice president. The spacecraft, derisively called GoreSat, was put into storage for years until it was adapted for use as a solar storm warning system. Today it regularly captures images of the whole of planet Earth from space, the original purpose of Triana, including instances when the moon crosses in front of the planet.

Most of the time, the upper stage of a Falcon 9 rocket is pushed back into Earth’s atmosphere after it has delivered its payload to orbit, a tidy way to avoid cluttering space.

But this upper stage needed all of its propellant to send DSCOVR on its way to its distant destination, and it ended up in a very high, elongated orbit around Earth, passing the orbit of the moon.

That opened the possibility of a collision someday. The motion of the Falcon 9 stage, dead and uncontrolled, is determined primarily by the gravitational pull of the Earth, the moon and the sun and a nudge of pressure from sunlight.

Debris in low-Earth orbit is closely tracked because of the danger to satellites and the International Space Station, but more distant objects like the DSCOVR rocket are mostly forgotten.

“As far as I know, I am the only person tracking these things,” Gray said.

While numerous spacecraft sent to the moon have crashed there, this appears to be the first time that something from Earth not aimed at the moon will end up there.

On Jan. 5, the rocket stage passed less than 6,000 miles from the moon. The moon’s gravity swung it on a course that looked like it might later cross paths with the moon.

Gray put out a request to amateur astronomers to take a look when the object zipped past Earth in January.

One of the people who answered the call was Peter Birtwhistle, a retired information technology professional who lives about 50 miles west of London. The domed 16-inch telescope in his garden, grandly named the Great Shefford Observatory, pointed at the part of the sky where the rocket stage zipped past in a few minutes.

The observations pinned down the trajectory enough to predict an impact. Astronomers will have a chance to take one more look before the rocket stage swings out beyond the moon one last time. It should then come in to hit the far side of the moon, out of sight of anyone from Earth.

NASA’s Lunar Reconnaissance Orbiter will not be in a position to see the impact live. But it will later pass over the expected impact site and take photographs of the freshly excavated crater.

Mark Robinson, a professor of earth and space exploration at Arizona State University who serves as the principal investigator for the Lunar Reconnaissance Orbiter’s camera, said he expected 4 tons of metal, hitting at a speed of some 5,700 mph, would carve out a divot 10 to 20 meters wide, or up to 65 feet in diameter.

That will give scientists a look at what lies below the surface, and unlike meteor strikes, they will know exactly the size and time of the impact.

India’s Chandrayaan-2 spacecraft, also in orbit around the moon, might also be able to photograph the impact site.

Other spacecraft headed toward the moon this year might get a chance to spot the impact site — if they do not also end up making unintended craters.
This article originally appeared in The New York Times. 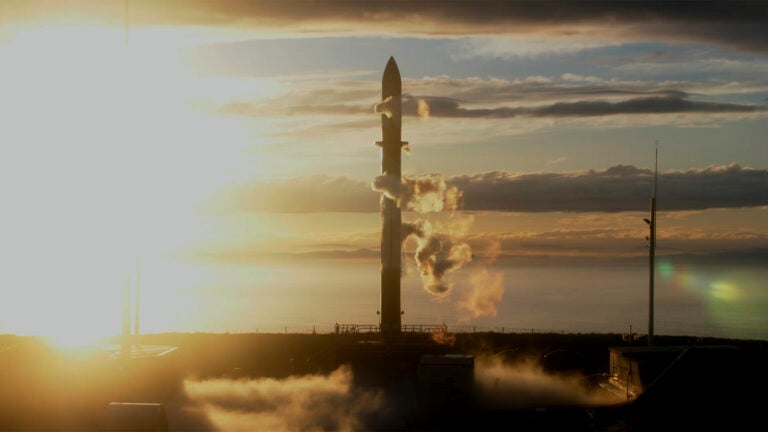