The workers at Sedgwick County Zoo had forgotten to clip the African flamingo’s wings, a painless bit of maintenance that keeps the beloved birds from flying away into the dangerous world outside.

The zoo was unable to retrieve the bird before it flew away from Kansas, facing long odds for survival in a region of the country with no other flamingos and few environments suited for its needs.

David Foreman, a machinist and fishing guide in Edna, Texas, didn’t know any of this when he and a friend set out on a boat in Port Lavaca on March 10 this year.

His customers often claim to see flamingos, mistaking them for the smaller-but-also-pink roseate spoonbills that are common in the Gulf Coast. He patiently explains to them that, no, there are no flamingos in Texas. He has told hundreds of people this.

But on this day he couldn’t believe his eyes. There it was, a tall, elegant bird standing on one leg as flamingos often do. He zoomed his phone’s camera in as far as it could go, searching for proof of what seemed unbelievable.

“My brain was telling me, ‘No way you’re looking at a flamingo,’ but my eyes were telling me, ‘That’s what it is; there’s no mistaking it,’” said Foreman, who grew up in a bird sanctuary.

He would have to update his spiel, he thought.

“It’s almost like nature’s way of putting me in my place,” Foreman said. “Mr. Knows-Everything thinks there’s no flamingos in Texas? Have a look at this.”

The boaters were too far away to see the tag. But Julie Hagen, a social media specialist with the Texas Parks and Wildlife Department, said No. 492 was spotted in the same area and during the same time of year that it’s been spotted in past years.

“We have no reason to believe that it is any other flamingo,” she said.

It served as confirmation that No. 492, estimated to be about 20 years old, is still persevering despite striking out on its own.

Its journey would fit snugly into a Pixar movie script.

No. 492 was one of 40 flamingos to arrive at the Kansas zoo in 2003. Most of the birds were probably around 3 years old, Scott Newland, curator of birds at the zoo, said in an interview in 2018.

He described feather clipping, the maintenance that keeps the birds grounded, as painless, “no different than you or I getting a haircut.” It must be repeated each year as birds molt their feathers and grow new ones.

But in June 2005, staff members missed the signs that No. 492’s wings needed to be clipped, and the bird flew away to a drainage canal in Wichita along with another flamingo, No. 347.

On July 4 — seriously, on Independence Day — the birds flew away from Wichita for good, No. 492 heading south and No. 347 heading north.

No. 347 was never seen again and likely didn’t survive the winter. No. 492, though, found a suitable environment in Texas, with its shallow, salty wetlands, high temperatures year-round and ample food sources.

It even met a longtime companion: A Caribbean flamingo that may have blown north into the Gulf during a tropical storm was spotted with No. 492 as early as 2006, but they haven’t been seen together since 2013.

“Even though they’re two different species, they are enough alike that they would have been more than happy to see each other,” Newland said in 2018. “They’re two lonely birds in kind of a foreign habitat. They’re not supposed to be there, so they have stayed together because there’s a bond.”

Flamingos in the wild can live into their 40s. Predators include foxes and bobcats, but since flamingos pose little threat to humans and are not considered game birds, No. 492 likely doesn’t have to worry about hunters.

Hagen said No. 492 has been spotted almost every year, typically in the spring, since it found its way to Texas. It’s unclear if the flamingo has made Texas its permanent home or if the state is part of a migration pattern that hasn’t yet been discovered.

Foreman first posted his video to his own Facebook and Instagram pages, and his friends alerted him to No. 492’s backstory and how rare the sighting was. It was “definitely a moment to remember,” he said.

“A flamingo in South Texas,” he said. “Wow. Who would’ve thought.”
This article originally appeared in The New York Times. 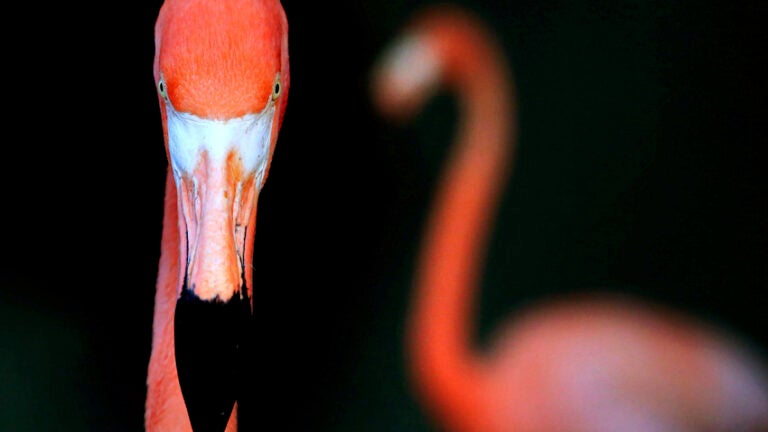 A child was skipping rocks at an Illinois zoo. Now a flamingo is dead.